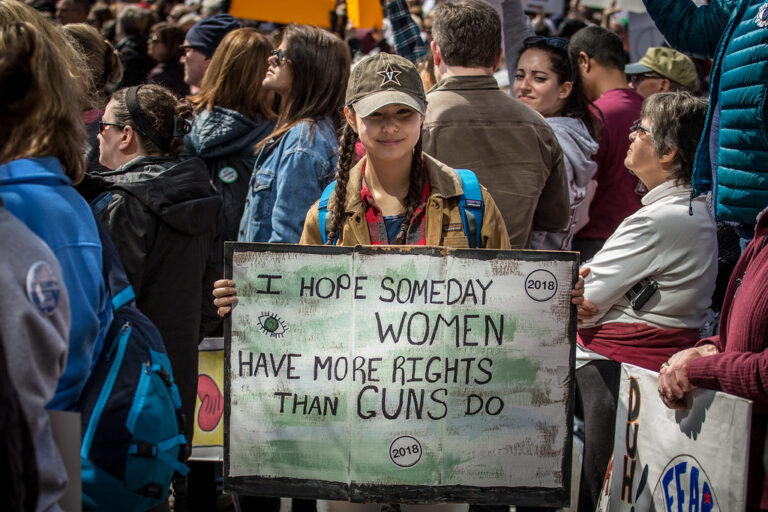 "March for Our Lives" by Phil Roeder is licensed under CC BY 2.0. To view a copy of this license, visit https://creativecommons.org/licenses/by/2.0/?ref=openverse.

Last week we discussed the dire import of Women’s Reproductive Rights in stemming what looked like – by all indications and historical perspective – a red wave in the 2022 midterms. This week we cover the offshoot of that and more.

The largest turnout for voters under 25, and by extension, up to 34 years of age, flooded the polls to vote in this year’s midterms. Since 1972, when the eligibility age went down to 18, there has always been an alarmingly trifling response from the youth vote. Even now, only 25% of the electorate is in that category, but it grew this November. Big time. In fact, there is enough evidence to surmise that it was the Gen Z vote that retained the Senate and nearly held the House for Democrats on the abortion issue and far more. And to put a finer point on it – voted against Republicans and everything they stand for.

Is this a trend or an anomaly?

Republicans better hope the latter, because a new wave is coming in 2024 and it is firmly in the Democrats column.

Firstly, just to get it out of the way, the completely corrupt, stupid, and wholly unsustainable sacking of Roe v Wade by this Supreme Court – a politically motivated hack-job clan of Republican puppets – horrified this voting bloc. Nearly 80% of Gen Z wants the government to not control their bodies. To them it is science fiction, something out of Handmaid’s Tale, and an abject abomination. It is not policy, religious goofiness, or a GOP talking point to rile up the slack-jawed unwashed for Gen Z. This is real freedom stuff for them. They came out in droves to make their voices heard. And unless Republicans work with Democrats to codify these rights at the legislative level, it will be a major albatross on their chances to win on the national, and in many cases the state level for decades to come. For a good example of this, I give you that 2022 is the first time the Democrats picked up governorships during a midterm for a sitting Dem president since FDR in 1934. That deserves an “Oof!”

Secondly, nearly eight out of 10 voters before the age of 30 want something done about climate change. They understand the science; they’re young, scared, and pissed. This is the case for those under 18, too, who are poised to vote soon. As long as Republicans refute climate change, vote against measures to address it, and blithely mock those who do, while sucking up to giant oil and coal concerns, they will not get the majority of these votes. This is the biggest issue for young voters, eclipsing even reproductive rights. Republicans, and moderate Democrats, are going to have to decide whether to speak to this issue with some empathy at the very least – much less do anything about it – or the Gen Z wave is going to wash them away.

Another sticky issue for Republicans going forward is gun violence. This is a generation raised on active shooter drills. As someone who endured the ‘duck and cover’ bullshit, I can tell you that stuff doesn’t just wash off the proverbial back. These kids do not have the same fervor for the Second Amendment as boomer/Gen X/millennial Johnny Six-Pack and would very much like sane and measured gun laws. In some cases, gun violence – especially in their schools – out-polls climate change and reproductive rights and is a major concern for Gen Z. This is not just a Republican problem, as many Democrats have also been reticent to go too far in addressing this issue head-on. I do not get into the gun fight (no pun intended) on a personal level, but these kids do, and they are not backing down.

Also, young voters are not inclined to embrace attacks on the LGBTQ community – hope Ron DeSantis is hearing this (likely not). Florida laws like Don’t Say Gay and other draconian measures are gangbusters for the late middle age to senior population down there, but, nationally, and especially among this new, powerful voting bloc, it is a loser. By simply whitewashing it with a broad stroke of “Wokism Run Amok” is not going to cut it. Gen Z knows the nuances of this and are not fooled by bumper sticker slogans.

This also goes for the coming attack on same sex marriage, which is also massively popular among non-idiots, who believe in things like the Declaration of Independence and the U.S. Constitution and are not Conservative Fascist lunatics like Clarence Thomas. A rousing eight out of 10 Americans support marriage equality and it is a done deal. But so was Roe v Wade, so there is no telling what this bought-and-paid-for Supreme Court is liable to do to it. If marriage equality goes – and Thomas has already declared this a goal, including everything formally protected by the Fourth and Fourteenth Amendments – then Republicans can just pack up 2024 and go back to whatever 1950s drawing board they are working with and chuck it for something that can appeal to anyone not brain-damaged.

Gen Z was the most powerful voting bloc of 2022, including a sizable majority of women, who were – and are – equally motivated by much of what is covered above in the midterms. This is what shifted the balance from an historical imperative that “the party out of power runs the table in midterms” to something else entirely. I hear a lot about Donald Trump and his half-baked clown-show candidates, or some weird love for Joe Biden, or clever TV ads as “reasons.” It was Gen Z. The kids are indeed all right and they are now in this game. They are the first politically motivated and engaged young voters of my lifetime and they let their voices be heard… and even that was not as powerful as it can be if they get these numbers closer to 30% or even 40% of the electorate. And as the Boomers shuffle off the mortal coil, and much of the disaffected Gen X crowd fade into apathy, this is the generation that will decide America’s fate and future.

Gen Z is here ad it is growing, year by year. They do not want what Republicans are selling and they may soon put the squeeze on Democrats who think it’s a guarantee they will be there for them. It is not. They have to earn it.