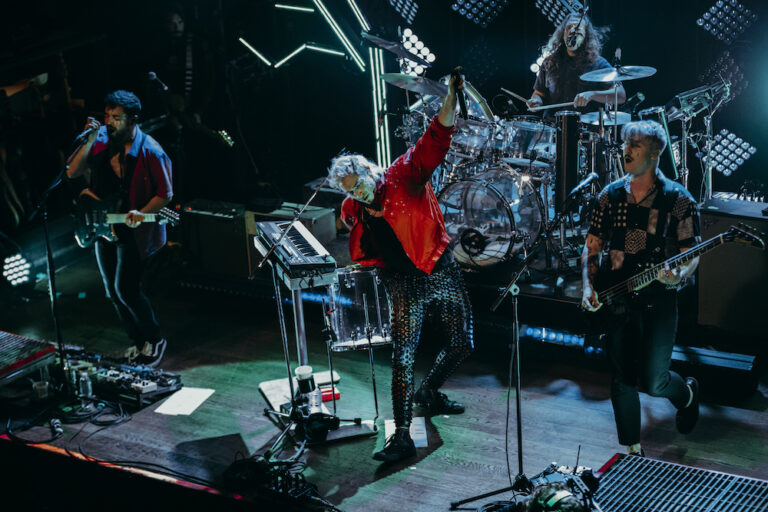 Known best for their dynamic feel-good tracks like “Shut Up and Dance” and underrated stunners like “Tightrope,” WALK THE MOON has been actively keeping alt pop music warm since the early 2010s.

It’s an unprecedented opportunity for any fan – the chance to hear your favorite band’s first big album live again and in its entirety. On their 10th Anniversary Tour, WALK THE MOON gave their fans just that (and more) with two sold-out NYC shows in celebration of their self-titled sophomore record.

The energy in the room was electric as the band took the stage at Irving Plaza on November 13. Sans an opening act, they delivered two-and-a-half hours of unadulterated joy. The crowd was made up of veteran and newfound fans alike, many donning the band’s signature multicolored face paint made up of minimalist dots and jagged stripes. Those looking to live out their nostalgic concert memories took notice of the two illuminated trees flanking the stage, an homage to the original stage design and album artwork. Dramatic silhouettes of the four-piece danced on stage with the help of a wall of rotating LED panels, a colorful tapestry of light moving in sync with fan favorites, such as hit live-while-we’re-young anthem, “Anna Sun.” The crowd jumped and sang in unison, a community coming together to celebrate what it means to be alive.

It was a night of love, jubilation, and artful storytelling. “I think when you buy a ticket to a WALK THE MOON show,” lead singer Nicholas Pettrica explained, “you’re signing up to get a little weird – or at the very least, your weirdness will be embraced.” Between songs from that seminal 2012 album, Petricca shared about his late father’s struggle with Alzheimer’s disease which inspired the track “Fixin’,” a song written from his father’s perspective. He also shared the story of his own coming out in 2020, followed by an energetic rendition of “Different Colors.”

One of the night’s highlights came half-way through the show, with a permission-giving performance of “I Can Lift a Car.”

“I just want you to remember,” Pettrica said, “that whatever the hell is going on out there, or in here, that you can always come back to music. We got you, we love you. We got you for life.” With the singer-songwriter leading the charge, a sea of hands pumped up and down, lifting their troubles high up above their heads and far from their minds for one night.

KEEP UP WITH WALK THE MOON’S MUSIC & TOURS BY CHECKING OUT THEIR INSTAGRAM OR VISITING THEIR WEBSITE!