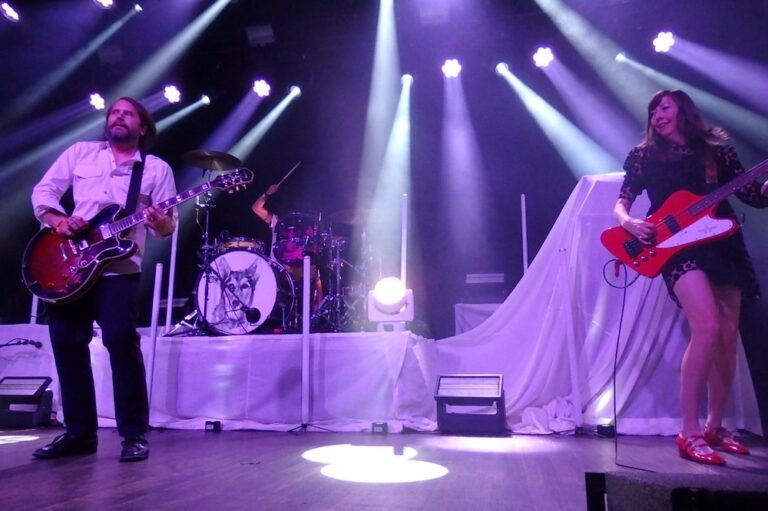 As a child in Topanga, California, Brian Aubert reportedly performed to his stuffed animals in his “fake Duran Duran lip-sync band.” During his college years in 1994, he met his future collaborator, Nikki Monninger, on a flight from Los Angeles to London. Both of them were headed to Cambridge for a school exchange program. Aubert noticed Monninger sitting across the aisle from him, stealing alcohol from the drink cart because she was underage. They became friends and, later, roommates in Los Angeles.

Aubert played guitar and Monninger learned to accompany him on bass. This led to them forming an indie-rock quartet called A Couple of Couples, playing in Los Angeles clubs, and becoming part of the Silver Lake music scene. By 2000, that band became Silversun Pickups. Since 2002, Silversun Pickups has consisted of Aubert, Monninger, drummer Christopher Guanlao, and keyboardist Joe Lester.

Silversun Pickups achieved mainstream success with its debut album, Carnavas, in 2006. Two of the album’s four singles, “Lazy Eye” and “Well Thought Out Twinkles,” reached the top 10 of the Billboard Modern Rock Tracks chart in 2007. Silversun Pickups’ sixth and most recent studio album, Physical Thrills, was released on August 19.

At Webster Hall, Silversun Pickups confidently launched the set with new compositions, “Stillness (Way Beyond)” and “Sticks and Stones,” the two opening songs from the most recent album. Rather than energizing the audience by starting with a rocker, “Stillness (Way Beyond)” was a brooding, haunting song with Aubert singing softly amid a wash of synthesizer waves, tribal percussion, and Monninger’s light harmonies. The stage lights were so red that it obliterated any definition other than four silhouettes on the stage. Fourteen tall and thin light bars scattered on the stage brought no further clarity. A few minutes later, “Sticks and Stones” played under equally obscuring blue lights, furthered the somewhat melancholy mood, yet the song was a bit livelier due to the more prominent guitar and bass line. “Well Thought Out Twinkles” followed and brought cheers, reminding the fans what attracted them to the concert in the first place.

A lot of sound came out of these four musicians throughout the performance. The arrangements often leaned on coarse grunge mixed with ambient shoegaze. Aubert’s sweeter vocals softened the blow, with the brief interludes between vocals piloted by soaring guitar runs. The rhythm section insured that the songs maintained a heavy bottom to contrast Aubert’s light vocal delivery.

The set concluded with a four-song encore. Again, rather than close with the familiar, the first three songs were from the album that the band released a little more than three weeks earlier. The concert ended with what is probably the band’s best known song, “Lazy Eye,” which started light and grew increasingly raucous.

The evening’s program consisted of 19 songs. Eight songs came from this year’s collection and so were performed live in New York City for the first time. The band also drew a few songs from each of the five previous albums and one EP. The juxtaposition of the new and unfamiliar abutting the vintage and familiar catalog demonstrated that the band’s signature sound was as viable today as it was 15 years ago.