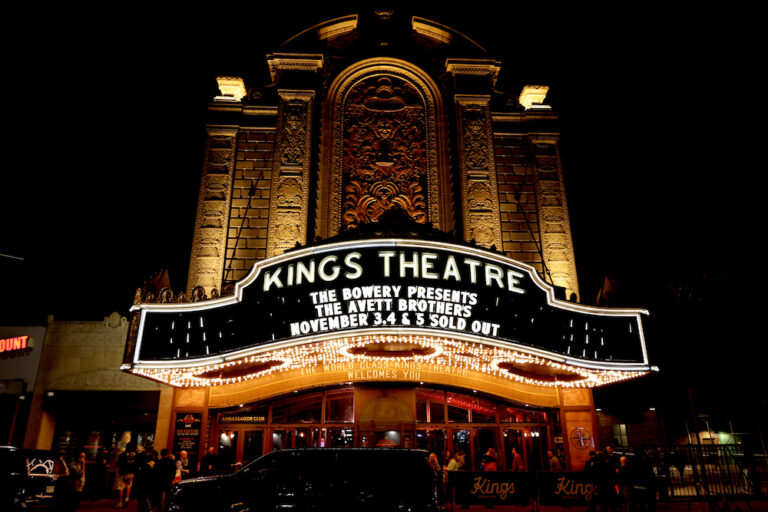 The Avett Brothers at the Kings Theatre / November 5, 2022

At the beginning of the pandemic in 2020, Seth Avett and his wife, actress Jennifer Carpenter, and their young son, Isaac, left their Manhattan home, rented a car, and drove to his hometown of Concord, North Carolina. He had maintained a home there, across the street from his brother Scott and next to his parents’ property. Scott was home also, recovering from an appendectomy. As the pandemic grew more widespread and threatening, the Avett Brothers scrapped their plans for a full-on band album and instead recorded another stripped-down acoustic EP, The Third Gleam, the third installment of their Gleam series, released on August 28, 2020.

The Avett Brothers did not get to tour that EP in 2020 due to the pandemic lockdown. Two years later, the brothers assembled the full band and booked a tour promoting no product in particular. The tour included three nights at the Kings Theatre, where the band performed a different repertoire each night.

On the third night, the Avett Brothers began the set as a trio, the two brothers on vocals and guitars, and their longtime collaborator Bob Crawford on upright bass. Singing “Don’t Be Scared,”  written by a fellow North Carolina resident, David Childers, the Avett Brothers established a gentle mood and a back-porch ambiance. By the second song, “Satan Pulls the Strings,” the other four members of the touring band came on stage to bring additional verve and volume to the Avett Brothers’ signature sound. These musicians were cellist Joe Kwon, fiddler Tania Elizabeth, keyboardist Bonnie Avett-Rini (the sister of the Avett Brothers), and drummer Mike Marsh.

The Saturday night set included songs from seven of the band’s 10 albums; oddly, no songs were featured from the most recent album, 2019’s Closer Than Together. The set also included one song from each of the three Gleam EPs, and one song, “Trouble Letting Go,” a single which has not yet been included in a compilation. Two of the four cover songs were written by David Childers.

Balancing fresh blasts of bluegrass, country, folk, pop and rock and roll, the Avett Brothers’ performance revealed a variety of influences on the musical spectrum, yet never deviated far from the band’s Americana core. Complex arrangements showcased all of the seven musicians and highlighted the band’s genre-crossing writing and performing. The choruses frequently built on the brothers’ lucid sibling harmonies. Frequently changing tempos and musical instruments from song to song livened the program.

Not only did the musicians execute the songs well, they all took the role of entertainers. The animated musicians were visually stimulating as they rocked and weaved with the music. Between songs, Seth and Scott shared personal anecdotes, bringing the audience into the family.

What happens next for the Avett Brothers has not yet been revealed. Seth Avett released an album on November 4, “Seth Avett Sings Greg Brown,” a 10-track tribute to his songwriting hero, recorded in hotels across the country while on tour. The band has scattered gigs through July 2023, but never for more than four nights in a given month. Whether the Avetts are in Manhattan or Concord, the schedule allows for family time at home and time to workshop new music.