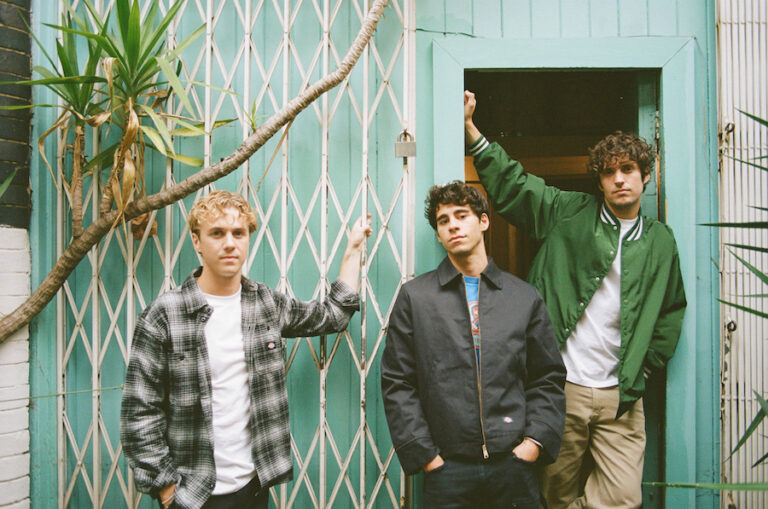 New York City has felt quiet without them, but New Rules is back to bring their show to The Bowery Ballroom.

After kicking off their tour in Philadelphia on November 28, New Rules are making their way back here to the Big Apple. When the English-Irish trio was last in the city, Alec McGarry, Nathan Lambert, and Ryan Meaney filled Mercury Lounge in downtown Manhattan. The excitement that radiated from the crowd resulted from their long-awaited New York debut finally coming to fruition, and it was a testament to their ability to build a strong community of fans.

New Rules’ forthcoming performance comes on the heels of their latest single release, “Late In The Evening.” This new tune radiates a timeless sound. Like most of their discography, the song underscores their beautiful vocals. However, what shines through the most is their composition as a group – as a group of three, they manage to blend each of their voices together seamlessly, especially heard on this pop track.

McGarry describes the new song as “homegrown.” This single truly seems to be a wonderful next step toward growing into the band they were destined to be.

Referencing artists like Taylor Swift and Ed Sheeran, New Rules emphasized how they wanted their music to transcend time. “Late In The Evening” certainly does that. In fact, Jamie Scott, who has worked with Sheeran, as well as One Direction, is one of the collaborators on the band’s new song. The three-piece is once again dipping a toe into the waters of the industry and finding opportunities to work with some of the people they admire.

“You have to try to not fanboy,” says McGarry on working with some of the biggest in the business. They know it’s special, but tell us that they’re keeping it cool. For a band with this level of talent, it’s no shock that some of music’s biggest are starting to take notice.

“What we’re writing now looks different than during the pandemic,” shares Lambert. The ability to get out and perform means that they’re able to feel that inspiration to build a killer set. Their focus hasn’t entirely shifted to the sounds of live music yet, but there’s certainly more of an opportunity to explore that sound.

While the band hasn’t played a full tour in the United States up until now, some music lovers got a chance to get a sneak peek into their talent. Outside of their shows in New York City and Los Angeles this past June, the tree did something we love – something they’re known for. New Rules created pop-up opportunities to connect with their fans more deeply, however, this time around the band took a risk and played a pop-up before a new audience. Outside of Chicago’s United Center, the trio decided to test their talents to a new (and sometimes scary) group: Harry Styles fans.

“We were quite nervous,” admits Meaney. They explained that they saw the fans lined up at the box office and with their instruments in hand, they had a plan. A nearby security guard, though, had to be the one to prod them in the right direction, encouraging them to do their mini pop-up performance. The trio played to the fans and certainly won their hearts. In fact, a video went viral of the off-the-cuff moment and Twitter raved about them.

New Rules are no strangers to internet fame either. The band gained traction on TikTok during lockdown by singing quick songs about different names people sent in. They amassed a following of over one million on the video app and fans new and old have been begging them to hit the road since.

Now, it is these fans across America that are getting to dance their hearts out with the band in person instead of online… or on a line for a Styles show. This means some revamped setlists are on the way and the band has the time to pull songs from recent releases and deeper in their catalog.

If you’ve never seen New Rules live before, you can expect to see the most charming boys perform some of the most heartfelt music. The Bowery Ballroom is the place to be in New York City on December 1 if you’re looking to find a band that with bright eyes and a future bigger than they even know.

FOR TICKETS AND INFORMATION ON THEIR TOUR, INCLUDING THEIR STOP IN NYC, VISIT NEW RULES’ WEBSITE! CHECK THE BAND AND THEIR MUSIC OUT EVEN MORE BY CLICKING HERE!