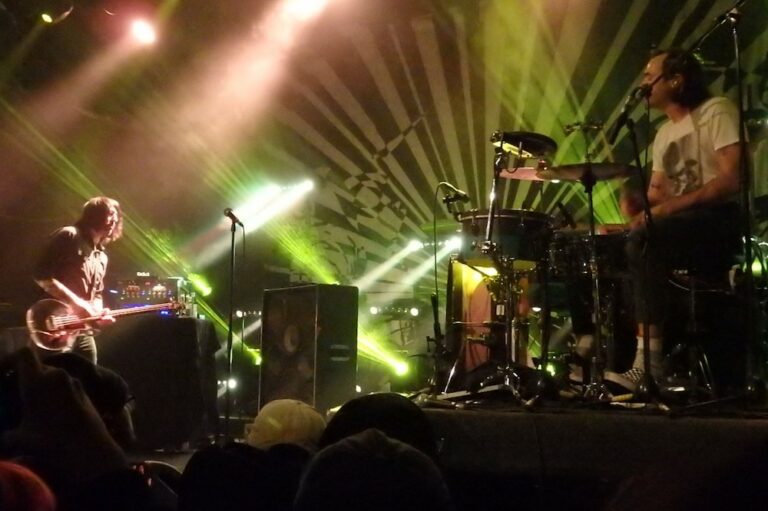 Usually a rhythm section of bass and drums holds the backbone of a band. In the case of Death from Above 1979, the bass and drums comprise the entire band. The duo never seriously considered expanding its ranks.

Sebastien Grainger doubles as the band’s vocalist and drummer. Jesse F. Keeler flat-picks his bass like a heavy-riffing guitar. As such, adding a guitar would be as redundant as adding another vocalist or drummer.

Grainger and Keeler formed Death from Above 1979 (also known as Death from Above) in 2001 in Toronto, Ontario. The duo released a debut album, You’re a Woman, I’m a Machine, in 2004 and split in 2006. The duo reformed in 2011 and resumed writing and recording new work. The band released its fourth and most recent album, Is 4 Lovers, in 2021.

On stage at the Music Hall of Williamsburg, the show started with a primal-sounding drumbeat, ushering in a deep and distorted bass line. After a few repetitions, Grainger introduced a vocal melody, singing cleanly and loudly to dominate the underlying sonic thrust. Even when the singing gravitated to shrieks and bellows, however, there was no escaping the hard crunch of the ultra-thick bass lines and the crashing of the percussion. Keeler occasionally moved to a keyboard and synthesizer, but for most of the show he was picking thunderous riffs on his bass.