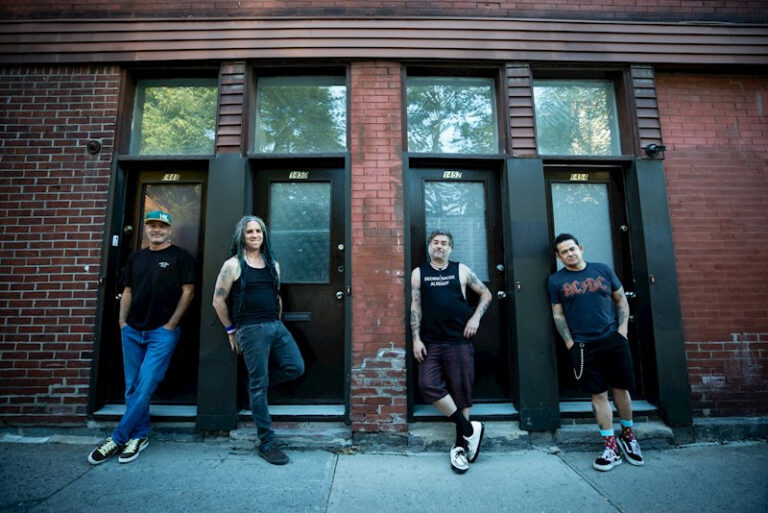 Listening Outside of the Box With NOFX

After a superb four-decade-long run that included the December 2 release of the band’s new Double Album, NOFX are nearing the end of the road. The band plans to go on an extended, grand finale tour that will take them through 2024 and will have enough material to release three additional albums, so while you may hear from NOFX in the future, your time to see them live has an expiration date.

NOFX, the influential punk rockers best-known for Punk in Drublic, a legendary album within the genre, are notorious for poking fun at anyone and everyone. Their latest release, Double Album, is an example of this. The record includes the track, “There’s No ‘Too Soon’ if Time Is Relative,” which tags physicist Stephen Hawking as creepy and lazy. The track was recorded prior to Hawking’s death. Bandleader/singer/bassist Fat Mike pens the band’s lyrics and much of the self-deprecating humor is self-directed.

NOFX also includes guitarist/trumpeter El Hefe, guitarist Eric Melvin, and drummer Erik “Smelly” Sandin – the latter of which we spoke to about these 40 years.

Your new disc, Double Album, was just released – two years after Single Album. Were they initially meant to be released together?

Was there any difference in how you recorded drum tracks between the two albums?

Before, like when we did Single Album, I would go in and just as fast as I could just do all of the songs. It might make two days or it might take a week to do all of the songs for a record. This one I kind of piecemealed the drums together because the songs weren’t completely finished. So I would go and record two or three songs and then go home for a couple of weeks while Mike finished up the structure of the next two or three songs to record. For me, it was a more enjoyable process because when I have to go in and do all 25 all at once it sucked because I’m trying to learn the on the fly and then record them on the fly and it doesn’t work very well.

Did you have a burst of energy in terms of heading into the studio after COVID?

I was kind of stoked to get back into the studio. Normally there’s a process where you tour, you write songs, get into recording – kind of like a never ending loop. This time, since there was time off, it felt good to get back doing it again. To be honest, when COVID happened I was like, “Am I unemployed forever? For eternity?” There was definitely a new sense of enlightenment and happiness on the recording side of things for me.

Next year marks the 40th anniversary of your formation and you’re calling it a day. Why now?

Mike has said that there will be three more albums after this one.

What do you think accounts for NOFX’s longevity?

There’s a lot of different personalities. Actually, me and Hefe are really easy going and kind of chill and relaxed, and Eric Melvin, too. Mike, as many artists are, is up and down. Sometimes it’s hard and other times it’s totally mellow and easy. We’ve known each other for so long that everything is taken with a grain of salt. For the most part we get along really well. It’s pretty weird that no one hates anybody, no one’s like, “Oh God, I have to hang out with this guy again,” which you hear a lot behind the scenes in bands. We’re a pretty solid unit.

What were your ambitions when the band started?

There were no goals and there were no ambitions. It was just to play music, just to have fun. We started when we were 16 years old and it was like, “Shoot, if we can get a show, that’s rad, and if we can get a party, that’s awesome.” Then it just slowly built bigger and bigger and bigger, and then one day we woke up and were like, “This is actually kind of working,” even though there was no plan for it when we started.

Speaking of double albums, what are some of your favorites?

I’ve never even given that a thought. [The Who’s] Tommy or maybe Quadrophenia. Oh, wait! Kiss Alive II! Ace Frehley was my favorite member of Kiss as a kid and I had a goldfish named Ace.

What makes for a good double album?

It’s about how you can keep an hour-and-a-half of music interesting. Both Tommy and Quadrophenia had a theme, a story. It’s got to be an emotional ride [with] peaks and valleys… not everything is the same texture. Like reading a book, there have to be slower chapters to build up to the bigger chapters. You have to set a mood.

How does NOFX not repeat itself yet keep your core sound for 40 years?

Like some bands I’m not going to name, especially in the hardcore genre, you listen to the first record and you listen to the 15th record and it’s the same formula. It doesn’t really diverge, it doesn’t really evolve. First off, when we first started playing we really didn’t know how to play, so there’s that. We got better as we got older and our musicianship got better. Mike is always listening to all genres of music and being influenced from that other stuff, and that probably evolved the songwriting, as well. I don’t think I would still be in this band if we sounded like we did in 1983. I think it’s just part of a natural evolution of being together 40 years and just listening outside of the box.

Do you have a number one NOFX moment from the last 40 years?

Number one was playing The Decline with the orchestra at Red Rocks, no doubt. That was just insane. It’s a whole package, every aspect of it. I’ll miss the bad parts, as well, because it’s part of it! The whole package is what I’ve done for 40 years.

FOR MORE ON NOFX, THEIR NEW ALBUM, AND THEIR FORTHCOMING TOUR, CHECK OUT THEIR WEBSITE!