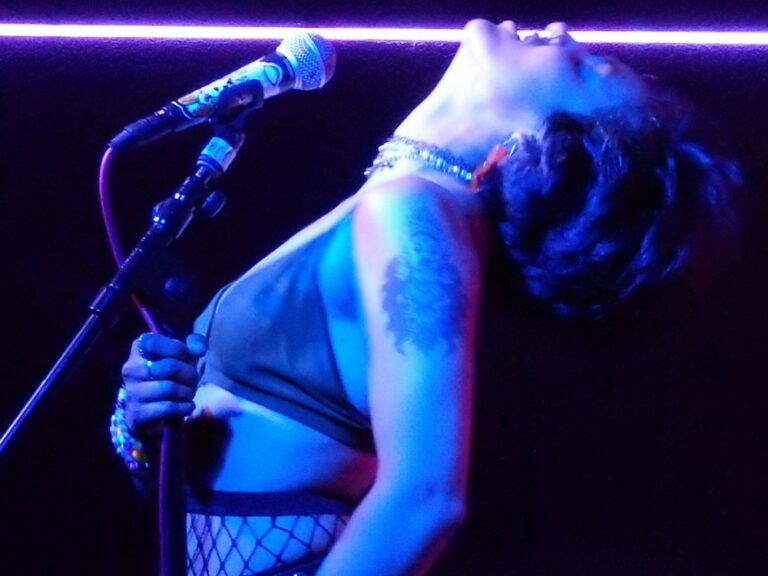 Three university students were aiming on careers in medicine and engineering. Between studies, the three were drawn together by the mutual desire to make hard and fast original music. The quickly emerging success of their band, Pinkshift, saw the three brown-skinned musicians gingerly explain to their immigrant parents that those academic and professional goals were on ice for now. Instead, they were going to rock, and rock hard indeed.

Pinkshift formed in 2019 in Baltimore, Maryland. Over the past three years, vocalist Ashrita Kumar (they/them/theirs), guitarist Paul Vallejo (he/him/his), and drummer Myron Houngbedji (he/him/his) released several songs, an EP, and now an album, Love Me Forever, released on October 21. The band recruited Michael Stabekis to replace the band’s original bassist for a tour promoting the album.

Pinkshift hit the stage at Elsewhere Stage One like a hurricane, blending together emo, grunge, hard rock, punk, riot grrl, thrash, and anything else that pummeled like a jackhammer. Pinkshift could have passed as a pop punk band, but the wider scope made the music more interesting. Kumar sang the melodies, Vallejo injected stinging riffs and leads, while Houngbedji and Stabekis pounded the backbone of the songs. Angry songs, sad songs, angst-filled songs, songs with messages of resistance against social injustice – they all sounded like they were shot from a cannon.

The musicians threw themselves into the music with physical force, all the more intensely since the stage was rather small. The audience likewise responded with sporadic moshing, including one in which Kumar insisted was to be a girls-only pit. At one point, Kumar encouraged the audience to confront personal traumas collectively with a cathartic scream. Towards the end of the set, however, Kumar borrowed the keyboard of the opening act, Jhariah, to perform solo on “in a breath,” a tender, vulnerable song that brought the raucous crowd to a hush. Kumar told the audience that they wrote the song in 2018, before forming Pinkshift, and that it was challenging for them to perform this highly personal song publicly. Within a few minutes, however, the full band returned to the highly energetic, sweaty, whirlwind of a show. By the end of the concert, Pinkshift may have performed its entire catalog on the Elsewhere Zone One stage.

Pinkshift’s hard-crunching performance made a powerful statement to the rock music industry’s predominantly white power brokers. The band is helping to create a space where more young and talented visionaries of color may be inspired to challenge racial stereotypes and lead the future rock market. For the time being, the band is furthering this mission one stage at a time.