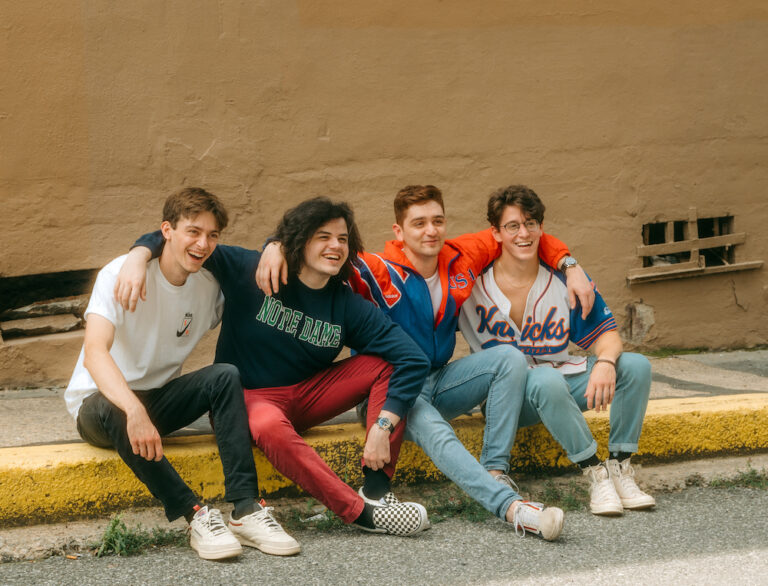 Kids That Fly Talk Making Something From Nothing

Nick Smeriglio, vocalist and guitarist for Kids That Fly, understands that it’s important to stick with something you’re passionate with – and he shared that with us. Alongside bandmates Branden Frandino, bass, Ryan Hendry, drums, and Blake Henry, guitar and synth, Smeriglio is shattering what a modern rock band can sound like or needs to sound like. The music doesn’t have to fit the bill of the pop punk resurgence. It doesn’t have to be twisted around a fancy feature to make waves. A good song and a great EP just needs a solid ground of musicianship and band members having real fun in real life. This is that.

Kids That Fly, even only a handful of years into the career, is a band already known for having fervent spirit, making up their rock energy, and a pure sort of romanticism lacing their narrative. Commuting to the Big Apple, mingling among fellow college students, falling into (and out of) relationships – there is a warmth to it all with these four. Their latest single, “Talk of the Town,” is out today with a music video that furthers all that edginess and cheeriness; something we admire and can only chalk up to coming straight from the group’s own friendship.

Tell us a bit about getting “Talk of the Town” together, both as a single and as a video. What were your inspirations and influences for both? The track feels a little like the modern rockers in Weathers, a bit like eighties-era Cheap Trick, and almost like what Green Day’s 2012 trilogy should’ve sounded like – and I mean that in the best way possible. However, the video feels older, wiser, and fun with a more retro in a John Hughes movie sense.

In terms of inspiration I would agree on Cheap Trick. We’ve always loved the simple, hard hitting rock of the eighties; it’s what we grew up on, with our parents driving us around as kids listening to classic rock radio stations.

“Talk of the Town” was a pretty last minute track addition to the EP – the video, as well. We had a song written called “Jamie” and even tracked drums before we realized it was pretty much a carbon copy of White Reaper’s “1F.” (Oops!) We ended up taking the drum tracks, slowing them down a few BPMs and slapped them on another demo that Blake had written a couple days prior, and the hook of “Talk of the Town” came out pretty naturally. It became kind of a Frankenstein’s monster of a song, with some of the original lyrics still on it, as well, but I think the way we went about it makes it one of the better songs on the EP. There was a little spark of magic that I felt as soon as I heard the melody over the guitars and it came together pretty quickly, which we’ve found is usually a good sign when writing.

The video on the other hand only happened because our publicist asked if we were planning on releasing one with the song, so we figured, “Hey, let’s save some money and try and make one ourselves.” We booked out Slide Studios in Brooklyn for a day – where we recorded most of the EP – and got to filming with Braden’s brother, Austin, who has done some photography for us in the past, and Blake’s dad’s old VHS camera. The original plan was to mix the behind the scenes VHS footage with the digital, but the natural effect on the VHS tape was so good we just decided to stick with it. The video, just like the song, was a bit of a happy accident. We were really happy with how it turned out.

Side note: such a compliment to have it compared to John Hughes films. We’re always hoping to emulate that kind of light-hearted nostalgia… glad we hit the nail on the head. Save Ferris!

Your new EP, Tracks of the High Line, is what you have called a ‘logical evolution’ and natural progression for the band. Why do you think that is and what do you want fans to find in these songs?

This particular EP was a long time coming. We’ve bounced around a lot both with how we’ve produced our songs and how we write them, but I think the EP as a whole is a nice middle ground for pushing the boundaries of the little space we take up in our genre and what we’d like to be as a band. We started the EP at the end of our college years coming through the pandemic, with our songs reflecting on our experiences during that time, and now we’re looking at our post-college, nine-to-five real world experiences. We’re definitely not kids anymore, but I think because we really started to jumpstart the band thing when we were at that age, we’ve carried over some of those thoughts feelings and feelings when making music and playing shows. I think that’s a good thing! We all need a little youthful energy in our lives every now and then. We want our fans to find growth, but still that friendly/nostalgic sound we’ve always aimed to create.

You four have grown out of UConn and are looking at the Big Apple as your band base, but Connecticut shaped you and is not far out of reach. How has your hometowns and your collegiate connections played into the music you make and the sound of Kids That Fly?

It all really started in college. We all met there through different parts of the music scene. We had played in a handful of bands each before that – mostly cover bands and little projects in our friends’ garages and basements, which I think molded our respective tastes in genre and style, but it didn’t really start looking like a reality that we could keep doing it until we all linked up at UConn. We played a few big events like the Spring Concert and HuskyTHON, which is the big dance marathon fundraiser for the CT Children’s Medical Center, and after that we started getting recognized on campus as ‘the guys in the band.’ (We were just popular on campus at the time, but that was enough for us to realize that people were really starting to see what we were up to). Since then we still see a good amount of our college friends and fans at shows in NYC, Connecticut, and even up in Boston. I think it’s really special that people are still traveling to see us play. We’ve been able to stay in touch with a lot of people that I don’t think we necessarily would have otherwise.

As for our Connecticut roots as a whole, we have a few pretty notable musicians that have come from our home state: Weezer and MGMT being the most relevant to our influences. Also, we’re back and forth all the time. We still rehearse in Stamford (Nick’s hometown) often – it’s just a hop skip and a jump from the Big Apple. Plus, we’ve realized it’s not that easy to keep a set of amps and a drum set in Manhattan, so it’s nice to get back up there and spread out a bit every now and then.

With that in mind, NYC and its culture, studios, opportunities, and blend of personalities can be an experience and an influence all on its own. Outside of the city, where do you hope to visit, who do you want to work with? We’d love to know a bit of your goals as creators and collaborators.

Ideally, we would love to do a country-wide tour and perform in some of the cities that fans have been asking us to visit. Philly, Chicago, DC, and LA are up there in our top places to play, but honestly we’ll go anywhere we get to meet some new fans and see some new things. As musicians from all backgrounds (jazz, rock, blues, etc.), we’re pretty open to collaborations with anyone. We’re always writing songs that don’t quite fit in our genre and think, “Wow, this would be perfect for that artist!” Just a few on the list would be maybe Gus Dapperton (who happens to have grown up the town over from Braden), a couple New York rappers who we’ve heard of through mutual connections, and in an alternate version of reality, definitely Sam Fender. We’d also love to collaborate with some new producers. Maybe someone in Nashville?

Our favorite thing, though, across the board, is to perform live. We’ll keep doing that until we’re too old to call ourselves ‘the Kids That Fly.’ That being said, the opportunities we’ve had for shows so far have been incredible – playing the Bowery Ballroom, selling out the Mercury Lounge in New York and the Middle East in Boston, we’ve been blown away with how many people we’ve met at these places who are singing the words to our songs during the show, there’s no feeling quite like it.

To be honest, we were close to calling it in the middle of the pandemic when we all started getting jobs and moving around because it wasn’t just a bunch of dudes playing music in their basement at college anymore. But once shows came back and we saw how many people enjoyed what we did, we couldn’t throw in the towel just yet.

Kids That Fly are one of our favorite bands to come out of the 2020s thus far. How has this era of music, from the artists to the streaming services to the social climate to social media, played a role in how you’re putting yourselves out there?

We’re glad to hear it! Listening, watching, and discovering new music is at such an interesting place right now. We try to fit in the middle somewhere, which has proven both beneficial and difficult. Social media promotion is completely necessary, and is now almost just as important as us putting out a well-produced record, which is pretty unfortunate in some ways but really cool in a lot of others. I do think that we’ve reached a lot of people and gotten to interact with a lot of fans that we probably wouldn’t have if it weren’t for things like Instagram or TikTok. At the end of the day, though, we truly believe that the music speaks for itself and that will always remain as the number one priority.

As for the creative side of it? There’s a lot of really cool things that have come out of the quarantine era of music production. Blake collaborates with a lot of artists and producers virtually on the side and I think the digital aspect of it has shown us how far we can push the boundaries when making music on our own. In the past we had a pretty conventional style of writing and recording, starting in a band setting and then tracking out all the instruments in a mostly linear way. The new EP has been more of a digital compilation of the songs, still a lot of aspects are tracked live like we normally would, but with a lot of the digitally recorded guitars and synth parts we’ve been messing with new techniques, layering and using some cool and unconventional effects while recording and in post. In the case of “Talk of the Town” we were able to copy, paste and mess with the drums for a totally different song and make something from pretty much nothing.

“TALK OF THE TOWN” IS OUT NOW! FOR MORE ON KIDS THAT FLY AND THEIR NEW EP, CLICK HERE!