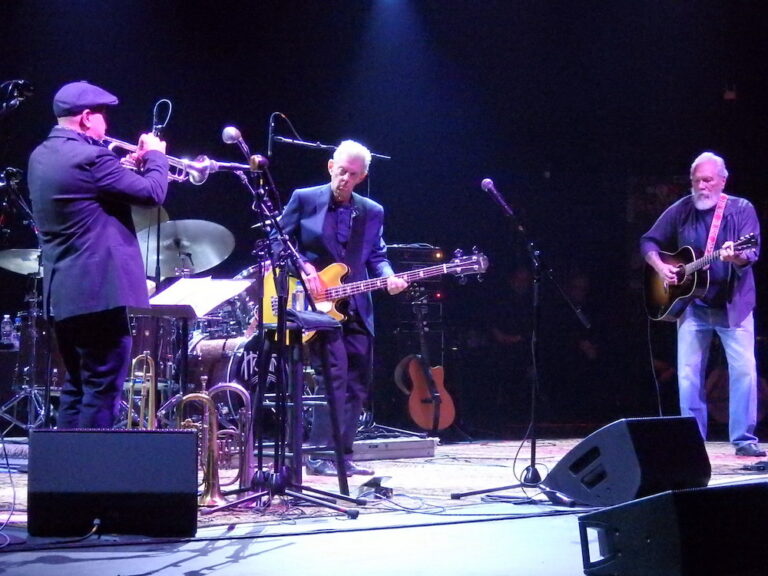 Hot Tuna, usually a power trio, expanded into a quartet at the band’s two shows at the Capitol Theatre on December 2 and 3. The core pair of guitarist Jorma Kaukonen and bassist Jack Casady, along with drummer Justin Guip, added Steven Bernstein on just about every instrument that requires blow power. Bernstein played trumpet, trombone, clarinet, and other instruments on every song of the two-set program.

Kaukonen is 81 years old and Casady is 78, and yet Hot Tuna, born in 1969 as an offshoot of Jefferson Airplane, continues to evolve in concert. The previous most recent performance of Hot Tuna in the New York area included guitarist/violinist Larry Campbell and vocalist Teresa Williams at Carnegie Hall this past spring. The addition of Bernstein this time around was different, however. Bernstein’s contribution added a deeper New Orleans flair to songs like “Hesitation Blues.” For a fair portion of the concert, the folk blues roots for which Hot Tuna is known sounded jazzy.

Hot Tuna has not released a studio album since 2011’s Steady As She Goes, so the current tour was not about promoting new product. Instead, the band mined its catalog for some rarely-performed songs mixed in with signature songs. Not locked into performing original songs, the repertoire also featured old blues songs although, this being an electric show, it lacked the selection of Reverend Gary Davis songs usually performed at acoustic Hot Tuna shows.

Kaukonen plays vintage blues styles, primarily Piedmont blues, that were popular nearly a century ago. The blues revival in the 1960s and 1970s has all but faded in the 21st century. Very few modern guitarists draw from these roots, making Kaukonen a historian of sorts and even a national treasure.

Kaukonen is very generous is offering his stage guests time to improvise and color the performances. Bernstein’s contributions altered the character of some of the songs in a fresh and exciting manner. Nevertheless, the audience came to hear Kaukonen’s unique finger picking and he did not disappoint. Even as an octogenarian, his fingers were fluid and masterful on his various electric and acoustic guitars.

In many ways, a Hot Tuna concert self-explains the grounding of rock music from its American blues roots. The band rocked the Capitol Theatre in a way that made modern pop music feel vacant. May Hot Tuna live forever.