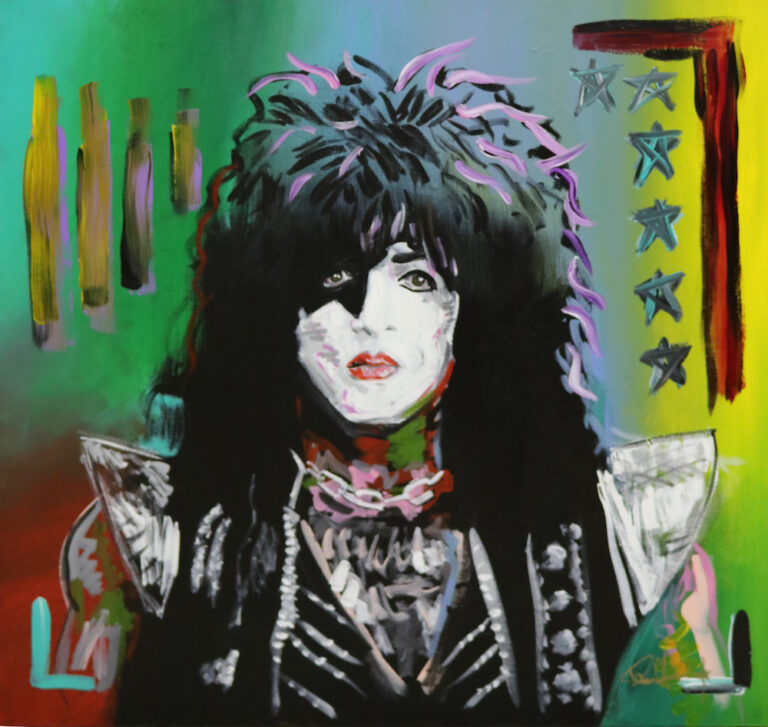 The Catharsis of Paul Stanley’s Universe

Starchild is a singer, songwriter, and guitarist. Paul Stanley is all of those things and more, including soloist, producer, artist, painter, and friend of The Aquarian.

As the vocalist/rhythm guitarist and main songwriter for Kiss, Paul Stanley is one of the most influential and successful musicians of all time – but he also has a second career as a highly accomplished painter. That talent will be on display at his exhibit in Short Hills, New Jersey at Wentworth Gallery on Saturday, December 17. Stanley himself will attend the event, where he plans to say a few words to the attendees as a group, then meet one-on-one with those who purchase his artwork.

Perhaps surprisingly, Stanley says that his five-decade career with Kiss has had little bearing on how he’s approached his visual art. “I don’t really see a correlation between the music and the art,” he says during a recent call from California, his longtime home. “Music is much more structured: it needs chords, lyrics, a rhyme scheme. It’s much more done within a framework than how I like to approach art.”

And with his painting, he adds, “My style is constantly evolving. I think the beauty of creativity is that it should always reflect who you are at that present time. So, certainly, my art has changed over the years, and will continue to. I think there is definitely a correlation between who you are, how you feel, and what you paint.”

Even so, there is one element that is evident across all of his work: it is vividly colorful. That, Stanley says, is deliberate. “I see color as a reflection of life. I think that if you’re leading a life that’s vibrant, you should reflect it,” he says.

The Short Hills exhibit will provide a good overview of Stanley’s painting career, as it will “encompass art of mine from the very earliest period ’til today.”

“I’ve been painting a series called The Black Series, and there’s some of those that will be there. You’ll get a chance to see where I’ve been and where I’m going.” he tells us. Stanley realizes that some people take an interest in his paintings because they’re already Kiss fans – but there are also “people who either know nothing about the band, or don’t like the band, [who] acquire my art. That’s terrific. It’s great to turn Kiss fans on to the possibility of enjoying art, whether it’s mine or someone else’s. And it’s also great to introduce myself as a painter over the years to people who are not really following the band.”

He first showed a talent for visual art when he was growing up in New York City. “As a youngster, I drew, and certainly dabbled in painting, but put it aside for music. Then, 10 years ago, I found my way back to it when my life wasn’t so great. I was going through some personal turmoil, and a friend of mine said, ‘You should paint.’ And somehow, that resonated with me. I started painting and I’ve never looked back.”

At first, Stanley didn’t intend to show his painting to anyone else. “I did it purely for myself, and as a cathartic exercise,” he shares, “but over time, people saw some work in my house and ultimately, a gallery owner asked me if I would do a show.” That was a huge success, and Stanley has continued to exhibit his work ever since, resulting in tens of millions of dollars in sales.

This success is especially impressive because Stanley is entirely self-taught. “I like the idea that technically, I know very little, in terms of painting, but through experience, I’ve learned quite a bit.”

The artist adds that he thinks this can-do attitude should be the way that everyone should approach their own passions. “I think everybody has more ability and more talent than they know or give themselves credit for,” Stanley adds. “It’s so easy for somebody to say what they can’t do, but that’s usually just echoing somebody else telling them that. The people who tell you what’s impossible are the ones who failed, and unfortunately, a lot of times, those people don’t want to see you succeed. It’s easy to find people to judge you or dissuade you from doing things. Don’t be one of those people for yourself.”

He recalls that he first learned the importance of self-belief when he was starting out as a professional musician. “When I told some people I was going to become a rock star, they looked at me with a lot of pity, like I was an idiot,” he says, “[but] I never wanted to try to fit the mold and be miserable doing it – my only rule has been this: no rules.’”