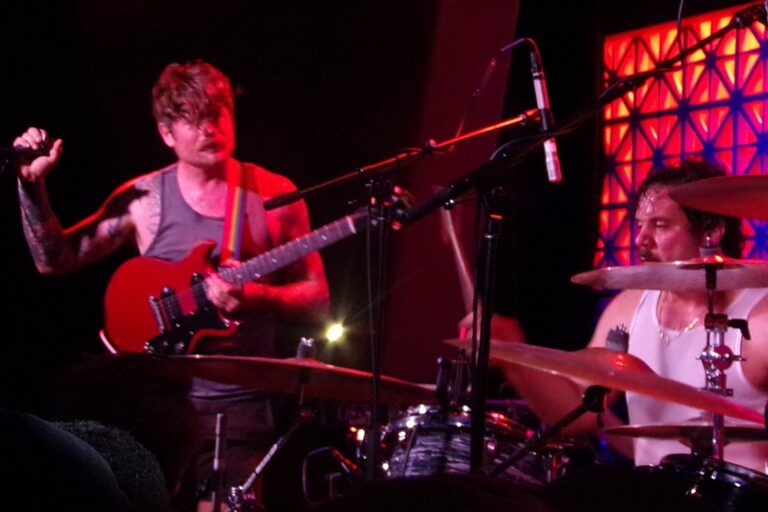 Osees on stage is volcanic. Osees erupts the moment the band starts playing. The band continues erupting continuously until the musicians walk off stage.

Osees was not always so volatile. Osees was not even always Osees. The band started as a tamer solo project for vocalist/guitarist John Dwyer in 1997 in San Francisco, California. Dwyer was in several local bands and sought an alternative outlet for his own experimental music. He initially named the solo project Orinoka Crash Suite. Along the way, Dwyer began collaborating with musicians and finally declared the project a band. The band slowly transitioned from being Dwyer’s adventurous side project into his primary group, as his other bands disbanded in 2005 and 2006.

Over time, Dwyer’s project became known as OCS, Orange County Sound, The Ohsees, The Oh Sees, Thee Oh Sees, and Oh Sees. Under the various names and personnel, with Dwyer as the sole consistent member, the outfit released 26 studio albums; the band released its most current studio album, A Foul Form, on August 12. Osees presently is based in Los Angeles, California.

For the current Osees tour, Dwyer is performing with keyboardist Tomas Dolas, bassist Tim Hellman, and drummers Paul Quattrone and Dan Rincon. At Brooklyn Made, roadies at intermission placed the twin drum kits side by side, front and center at the lip of the stage. The other band members would be limited in space; Dwyer at stage right, Hellman at stage left, with Dolas and his suitcase of synthesizers almost invisible behind the drummers; placing Dolas on a riser could have made his musical participation more noticeable.

While the band in the past has gambled with several genres, the current show is all about lightning-fast and highest-energy rock. Dwyer played a bit of synthesizer, but mostly he clipped rapid leads and chords on his guitar, often punctuated with roaring feedback and white noise. He tempered the rage of guitar licks when he sang, but as soon as he moved away from the microphone, he blared his guitar madly again. As the set progressed, the expansive jams grew speedier, longer and louder. Kudos to the sweat-soaked drummers, whose impressive symmetry and stamina helped power the intensity levels.

The propulsive 22-song set drew from 11 albums. Except for a few slower psych-rock moments, the set harmonized as if all the songs were drawn from the same inspirational frenzy. This was garage rock at its harshest ferocity. Keeping up to date with the band’s name changes may be challenging, but that task is easier than keeping pace with Osees’ live show.