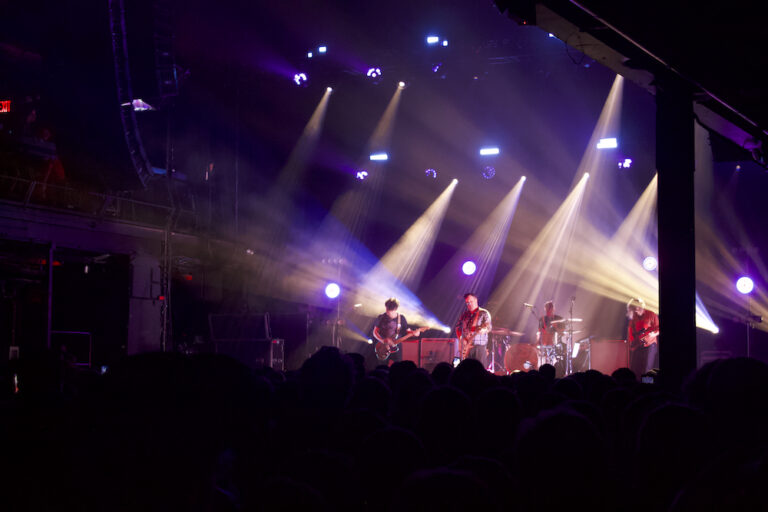 Modest Mouse has been celebrating the 25th anniversary of their second album, The Lonesome Crowded West, with a tour commemorating it with a setlist stacked with the full tracklist. On December 19, they performed for a the second night at Terminal 5.

Modest Mouse formed in 1992, and has been an evolving/revolving conglomerate of musicians with singer and guitarist Isaac Brock being the sole consistent member. For over 30 years, they have played a seminal role in the indie music world and continue to inspire artists with their distinctive sound.

Terminal 5 was a perfectly aligned venue to host the indie band – an unmarked warehouse in Hell’s Kitchen, much inline with The Lonesome Crowded West’s anti-urban-expansionist themes. Opening the show was Hooray For Earth, a NYC-based band that broke up in 2014, but seems to be back. Noel Heroux performed one song by himself, twisting and turning knobs on a sequencer and singing into a microphone-screeching, squealing, and reverberating. During the next song, his partner Jessica joined him on drums, and the song was more fluid in its experimental pop. For their third song, the band became a septet and Noel picked up a guitar. Their next song, they were a quartet. At one point, a trio. I’m not sure how many people are in Hooray for Earth, but I dug it. Sonically diverse.

Modest Mouse hit the stage at 9:10 p.m., a quartet (I’ve seen them previously as a 15-piece ensemble) clad in matching jeans jackets with patches praising the buffalo. They played the frantic first five seconds of “Teeth Like God’s Shoeshine” before Isaac sang out and was met by the sold-out crowd’s voices. A bit of moshing broke out as Isaac sang about ghost-town malls and Orange Juliuses. The crowd’s excitement grew with “Heart Cooks Brain,” then got even louder with “Convenient Parking,” a track about buying meth at the back of a parking lot.

Many people don’t like “Lounge (Closing Time)” because it’s seen as repetitive, but I think this is one of the standouts of TLCW. It’s a narrative about unrequited love and guised intentions in an unending cyclical landscape. Plus, the building transition into the second half is really well paced.

“Doin’ the Cockroach” saw the band pick up the energy once again and the crowd was at their peak. “Cowboy Dan,” “Trailer Trash,” and “Out of Gas” were played without an applause break in between; a movement about nomads. “And I want out desperately,” Isaac sings on “Cowboy Dan,” and replies to himself in “Out of Gas” with, “Out of gas, out of road. Out of car, I don’t know how I’m going to go.” Just like our unlikely hero Cowboy Dan, we’re faced with the existential monotony of possibly being abandoned by God. That theme exists throughout, most notably in “Bankrupt on Selling,” where the Apostles turn in Jesus for material possessions. Even more so on the final track, “Styrofoam Boots/It’s Nice on Ice, Alright:” the lyrics are “God takes care of himself.”

Modest Mouse’s “Shit Luck” was particularly fun to witness. A whole crowd of people screamed, “This plane is definitely crashing!” After that rapid song, the five-times-as-long “Truckers Atlas” reaffirmed the dichotomy of isolation in the 20th century – “I don’t feel and I feel great.”

After finishing The Lonesome Crowded West set to considerable applause, the band returned to the stage for a four song encore – “3rd Planet,” “A Life of Arctic Sounds,” “Edit the Sad Parts,” and lastly “Grey Ice Water.”

Modest Mouse has an impressive stage lighting display. Every song is unique and mesmerizing to watch. On top of that, the four members of the band ebb and flow with bursts of energy depending on which song they’re at in the tracklist. The Lonesome Crowded West put Modest Mouse on the map (or, say, a “Truckers Atlas”)  for confronting themes other bands were hesitant to address, and their fans remain vigilant after all these years.

This past October, Modest Mouse celebrated 25 years of writing a record that is a challenging critique on the state of a nation that was approaching a new millennium – a nation barrelling forward into a consumerist landscape full of strip malls and strip clubs, replacing God with the buffalo replaced again for the dollar, yearning for the nostalgia of how things were yet advancing into a gloomy mediocrity.  The scary part is how right they were. Malls are becoming ghost-towns, junk food is booming, and everyone is self-medicating through drugs, alcohol, daydreaming, and praying.

The show ended and the crowd dispersed. I walked in the New York cold, grabbed a chicken over rice platter from a food truck, and ate it on a Columbus Circle bench; reflecting on Isaac’s standpoint and letting the cold hit my face.