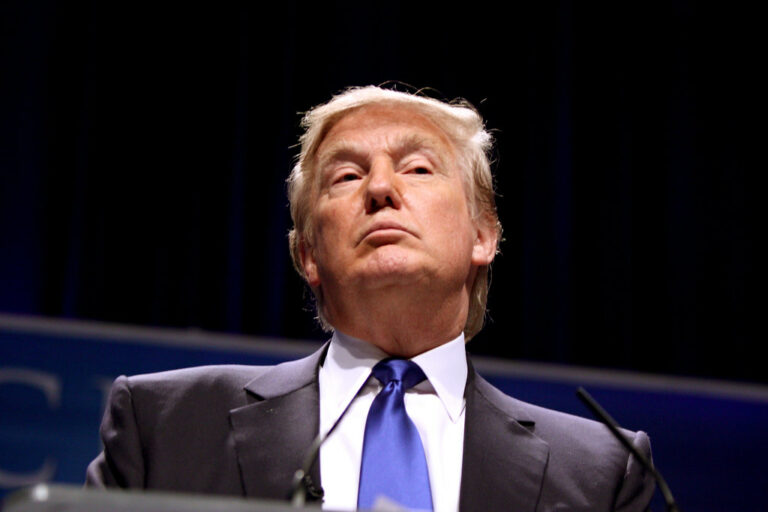 "Donald Trump" by Gage Skidmore is licensed under CC BY-SA 2.0. To view a copy of this license, visit https://creativecommons.org/licenses/by-sa/2.0/?ref=openverse.

Reality Check: TRUMP: THE WEEK THAT WAS

Can anyone recall a worse week for a public figure that did not end up face down on a rug in his bathroom with his pants down around his knees? I cannot. Please wrack your brain. You will come up short.

In a whirlwind shitstorm that swept away the final crumbs of delusion that Donald Trump is any more than a bizarre hiccup in the human genome, the former president was found potentially guilty on four counts in fomenting, planning, and covering up a coup d’état from the Oval Office and had his completely fraudulent tax returns exposed to the world. Trump has now fully joined his buddy, Vladmir Putin as a paper tiger exposed as a useless fat old fart with a daddy complex. At least Putin is still “in charge” of something, although that is debatable in most studies of political fallout. Trump is a doomed multiple loser that is slowly devolved into sad parody.

As discussed last week, the Republican Party is trapped between trying to morph this wretched news into political witch-hunt status, a favorite defense of the pathetic one-trick-pony Trump playbook. Republican congressman Kevin Brady from Texas held a press conference calling the motivation for releasing tax returns “flimsy.” Perhaps Brady, who eerily sounds like a man recovering from a serious bout of brain bubbles, might consider listening to the guy he defends. Trump repeatedly told the nation in 2015 and 2016 that he would release his taxes once some fictious audit was done – spoiler alert: there would be no audit for another two years. Trump hid the damn things so he could hijack the country for four years after pulling the electoral equivalent of an inside straight that America duly corrected in 2018, 2020, and 2022, rejecting his ass-hat routine and those who run for office under its feckless construct.

Republicans can spin and hide all they want; their boy, twice impeached, while being the first one-term caretaker president to lose the House, Senate, and White House since Herbert Hoover, is fast becoming the latest parcel for history’s dustbin. None of the above compares to Citizen Trump’s bad news this week. Four counts of criminal behavior handed down from a bipartisan congressional committee to investigate one of the most violent uprisings against American democracy since Fort Sumpter is to put it mildly, and to quote the guy who sent Trump packing two years ago, “a big fucking deal.”

None of the charges would appear to have needed a special investigative counsel, though. For one, Trump admitted to two of them: Conspiracy to Make a False Statement and Obstruction of an Official Proceeding Conspiracy. For the former he might argue those statements about the 2020 presidential election being “rigged” were not false, despite zero evidence, dozens of failed court cases, and bogus recounts that made the loss worse, but he made them, and still makes them to the point where he is publicly declaring the U.S. Constitution should be abandoned because of it. As for the latter, again, his aim for January 6, from public statements and Twitter-invites to come to the Capitol for his “Stop the Steal” (Steal? See charge #1.), because “it will be wild!” was clear. He also maintained (Again, falsely, see charge #1.) that the vice president of the United States could halt the march of democratic order. He could not, and when he didn’t, Trump tweeted that Mike Pence was a “coward.” And this was as domestic terrorists jacked on his bullshit and fancy invites were smashing into the Capitol and injuring and murdering cops, So, those are slam dunks.

Conspiracy to Defraud the United States was – let’s face it – the underlying principle of the Trump presidency. The entire thing was why people voted for him: to create a whimsical fuck-around for his own vanity and pleasure, and take down a “corrupt government” run by godless pedophiles or whatever the flavor of the month was. Nothing he did from treason, obstruction of justice, placating foreign despots, and dismantling governmental institutions was no surprise for those who would eventually follow him into the violence of January 6. Hell, it might have worked as an actual governing principle, except it didn’t. It was a bleating, king-hell, stumble-bum farce, and a pox on any idea of why there even is a United States of America. They/He tried, give them credit, but they/he failed in the most humiliating way, and now the piper has come for the check.

And finally, before we get to the tax issue, there is the charge to “incite,” “assist” or “aid or comfort” an Insurrection (quotes are in the brief). This was obvious from the start: Trump can’t lose. Otherwise, his father haunts him, the weird hair/tan/gut/floppy-suits/monosyllabic blather is not the eccentricities of a misunderstood genius, just the jabbering spittle of an abject moron. Losing is not an option for Trump, so he enacted all this stuff and he got busted. Now, instead of whining like a little rich boy bitch, he should suck it up. When Trump told that dink Kevin McCarthy that “maybe you should be as angry as I and those brave people trying to take about our country,” he had already copped to the above crime. Shit, there were probably crimes if he were still a game show host or a gad about Manhattan, but he was the president of the United States when he committed them. He had full control of the U.S. Army. He turned the executive branch into an insurrectionist outpost waging war on the rest of the federal government – as he had previously taken on the intelligence community, the FBI, and the press for four years. The piper will see you now.

Ok, onto the taxes, which prove one thing two ways: Trump was/is a fraud. For two years a purported multi-billionaire was cheating us by paying a paltry $750 (he paid zero taxes in 2020) or his supposed business acumen was/is patently false. Because those level of losses would kill sizable villages, with numbers so awful anyone even thinking about attempting to lend this goof money or partnering with him should probably walk slowly into the ocean to prevent infecting the rest of humanity…. Or he and his crack team lied about the whole thing, which, of course, as expected, explains why whilst running for the nation’s highest office in 2016 he fought like cornered vermin to keep these things from us. And now it is out there – he sucks at business, or he is a tax cheat, and, again, a fucking criminal. Those are the choices. Pick one.

Either way, this was one whiz-bang, ass-reaming embarrassment of a week for Donald Trump, who, if memory serves, is running for president again. And will most likely be the nominee for the Republican Party, which is so morally bankrupt and intellectually damaged that it really has no alternative.