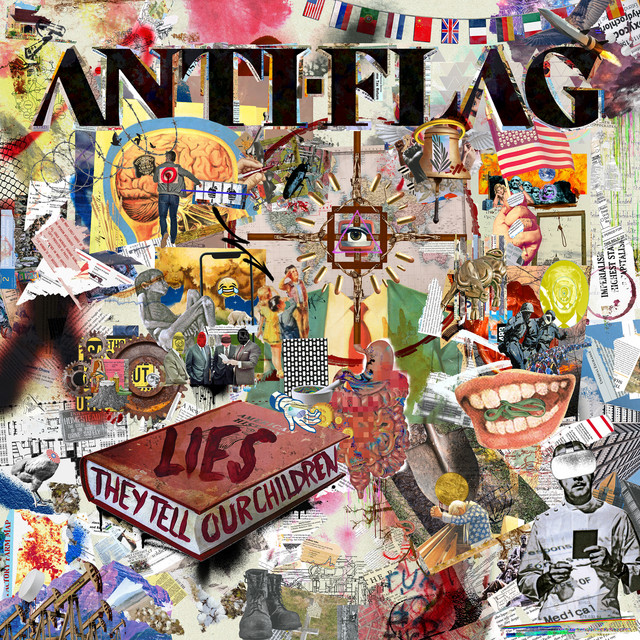 Anti-Flag Reclaim January 6 With ‘Lies They Tell Our Children’

There are several dates in American history that resonate with the populace for the emotions they stir up: July 4, December 7, September, 11. Two years ago, on January 6, there was a riot of Trump supporters at the Capitol trying to overturn the electoral vote count. As millions watched in fear as protestors armed with weapons breached the Capitol, plenty more wondered how things got to that point.

Pittsburgh’s punk legends, Anti-Flag, responded the only way they know how: by writing, recording, and releasing their 13th studio album, Lies They Tell Our Children on January 6 (2023) from Spinefarm Records in hopes to address many American issues.

For over 30 years, Anti-Flag has been a vocal force in punk. The lineup of guitarist Justin Sane, rhythm guitarist Chris Head, bassist Chris #2, and drummer Pat Thetic have commented on crucial issues in global politics, including the rise of fascism, labor and class struggles, political corruption, racism, and much more.

The opening track, “SOLD EVERYTHING,” is a short introductory song proclaiming the profiteering of every aspect of a human life; simply repeated, “They sold everything.” Directly following it, “MODERN META MEDICINE,” has Chris #2 singing and features Jesse Leach of Killswitch Engage as a guest vocalist. It’s a rager that sees their foray into metal territory. This song is clearly a stab at Meta, formerly Facebook, for pushing anti-vaccination content throughout a global pandemic.

“LAUGH. CRY. SMILE. DIE.” is a Justin-led anthem featuring Silverstein’s Shane Told. This song acts as a desperate plea for anyone to hear them; “Can you hear me, hear me calling?…Does anybody care?” After 30 years as a punk band, I’m sure there were moments where Anti-Flag has felt like they’re speaking into the void, despite their songs of revolution. That frustration is felt near the end: “Is anybody listening? Is anybody fucking there?” Pat Thetic’s drums are especially prominent in the latter half of this song.

“THE FIGHT OF OUR LIVES” has two other icons from the punk scene helping Anti-Flag get their point across: Bad Religion’s Brian Baker and Rise Against’s Tim McIlrath. They make this one of the standout tracks on the record. A resilient track meant to inspire, it is so good but much too short – especially with the guitar solo squeezed in at the very end. Following that, Ashrita Kumar of Pinkshift is featured on “IMPERIALISM.” Pinkshift has emerged over the past few years as one of the torchbearers of modern punk, and to collaborate on an Anti-Flag record is a massive step and show of good faith for the young band. A great vocal performance from Ashrita and Justin here.

Another track, “THE HAZARDOUS,” is a more electric tune that reaffirms the ‘us vs. them’ theme that is ever present throughout Anti-Flag’s discography. “They’ve got the guns to our heads,” bellows Justin and Chris #2 in unison. It’s the “same war” we’ve been fighting since punk’s inception. “SHALLOW GRAVES” features Tré Burt, a San Francisco roots/folk songwriter who was signed to John Prine’s Oh Boy Records in 2019. His contribution is subtle, but offers a welcomed, laidback guitar strumming, shifting the song into the realm of neofolk.

“WORKER STRUGGLE” is a song structured like a Pete Seeger song – focused on simple, repetitive choruses for people to sing along in unity. Last up is “ONLY IN MY HEAD,” which ends the album strongly. Chris #2 is screaming above his register, the guitars act as chainsaws, and the very real threat of the deletion of history is a concern for those paying attention.

Punk has always been about going against the grain, and singing about injustice around the world and difficult topics is not an easy feat, but to be doing it for 30 years and still have things to say is an accomplishment few bands can achieve.

Anti-Flag is not your everyday punk band, though. They’re veterans of a genre that has shifted since the days of The Stooges. They have adapted… and part of that adaptation includes a multitude of diverse perspectives and voices, such as Stacey Dee from Bad Cop/Bad Cop,Tre Burt, and Pinkshift’s Ashrita Kumar. The inclusion of different ages, genres, and genders is the foundation of punk: all are welcome on our side.

Lies They Tell Our Children is a fresh record. Anti-Flag show no sign of stopping. There’s a fight to win, and they’re not going to rest until it is won.

LIES THEY TELL OUR CHILDREN, THE NEW PUNK ROCK ALBUM FROM ANTI-FLAG, IS OUT NOW ON ALL DSPS AND MORE HERE!