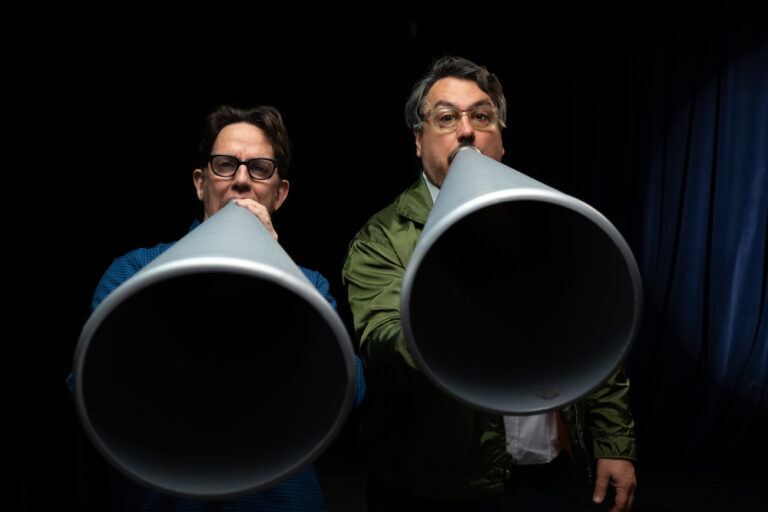 Comments under the most recent They Might Be Giants music video range from “disturbing” and “unsettling” to “mind-blowing” and “modern classic.” Granted, the colorful, jarring visual is accompanying a song that is a decade old and animated by the same artist behind other TMBG hits, but these comments from fans ring true today more than ever before. That is saying a lot for a band 40 years into their career.

“It scares me how long we’ve been going,” says John Flansburgh with a laugh. He’s referring to They Might Be Giants, the legendary duo he formed in 1982 with John Linnell. Since then, they have become one of the most beloved bands in alternative rock, as they’ll prove when they play much-anticipated shows in Philadelphia on January 11 and 12 (Union Transfer), and in New York City on January 13, 14, and 15 (Bowery Ballroom).

Of the band’s early days some four decades ago, Flansburgh admits, “It seemed like what we were doing was really unlikely, and I was very prepared for profound rejection,” when their esoteric approach set them apart from other artists. “I’d seen lots of artsy bands in my life. I’d seen a lot of experimental rock bands that did not connect with audiences.”

Instead, he recalls how people were enthusiastic right from the band’s very first show: “I couldn’t believe how interested everybody was. We got crazy support from the audience, and it felt really good. It was very affirmative to me. It really buoyed my spirits about what we were doing. It made me think, ‘This really connects with people – this is so odd.’”

Since then, They Might Be Giants have been remarkably prolific: their 23rd studio album, Book, came out in 2021 – aptly with an accompanying book about the band’s lyrics, which has been nominated for a Grammy Award for “Best Boxed or Special Limited Edition Package.” (They’ve already won a Grammy, for their theme song for the hit television show Malcolm in the Middle, which starred Frankie Muniz and coincidentally premiered 23 years ago today.) Beyond their regular band output, they’ve also released five critically acclaimed albums for children.

Their most beloved work of all might be Flood, their third studio album. Released in 1990, it contains two of their best-known songs: “Birdhouse in Your Soul” and “Istanbul (Not Constantinople).” In a nod to that album’s significance, the band will perform it in full at their upcoming shows – though even Flansburgh admits that he’s surprised that this particular album has enjoyed such enduring popularity.

“I don’t think it seemed that important at the time,” he says of Flood. “Ultimately, it’s been our best-selling record, but it didn’t seem that different than other new records that we were doing before or after. But over time, it’s become clear that that’s how people are initiated into the world of They Might Be Giants – the real common denominator is that this album is almost everyone’s introduction to our band.”

Still, Flansburgh cautions that audiences shouldn’t expect the band to recreate Flood perfectly in a live setting. “Some people have complained, ‘Why don’t you play it note-for-note, and why don’t you play it in sequence?’ And it’s like, ‘Well, we don’t play it in sequence because we’re human beings and we’re easily bored with ourselves.’ So we put it together in a way that’s exciting and challenging for ourselves, and I think that works better.”

The band’s co-founder adds that it was this commitment to making quality (and quirky) music that drew him to playing with Linnell in the first place. “John and I were friends and we had a lot of shared sensibilities, so it was just very easy working on stuff with him. We just started the band for fun. The fact that it ended up taking off was kind of a surprise.”

Flansburgh and Linnell first met at their suburban Boston high school, but they didn’t form They Might Be Giants until 1982, soon after they each had moved to Brooklyn. Their goal, Flansburgh explains to us, was to create something that avoided any predictable formulas. “There’s so many tropes in rock,” he says. “I can talk for an hour about all the clichés that make me shake my fist to the sky about rock bands.”

Continuing, he states, “We were kind of ambitious about what we were doing in a way that was very abstract. We were trying to do something that would make sense to people, but I think our basic impulses were probably pretty left of center.” To accomplish this, he and Linnell (both vocalists and multi-instrumentalists) often incorporated instrumentation that is rarely heard in rock (such as prominently featuring the accordion). As Flansburgh goes on, he notes that “there is a lot of electronic and experimental music impulses folded together with actual pop sensibilities” in the discography of They Might Be Giants.

Their lyrics are also unusual: consistently witty and often addressing uncommon topics, “and then, on top of it, there’s this humor sensibility that’s just a very natural reflection of who John and I are.”

A colorful artist and person, Flansburgh confesses that “It’s not forced. It’s not like we’re trying to figure out, ‘How can we be super funny?’” But, while telling us this, he grins. “If we were supposed to actually be a funny band, we should be a lot funnier.”

Though their utterly unique style has made They Might Be Giants a favorite band for many people, Flansburgh knows their work is not for everyone. “We’ve gotten some epically bad reviews in our lives,” he says. He chuckles as he recalls an article accusing They Might Be Giants of being “the opposite of rock and roll.”

“I know [the writer] meant it in a profoundly dismissive way, but I have to say, I actually think there’s something quite magnificent about being the opposite of rock and roll. It makes so many assumptions about the quality of rock and roll. I love rock and roll, but there’s a lot of crap rock and roll – and rock and roll is also not the only thing in the world. All styles of music can be celebrated and reanimated and destroyed. They’re ineffable and ultimately indestructible.”

In actuality, “ineffable and ultimately indestructible” seems like a good way to sum up They Might Be Giants themselves – and, Flansburgh says, even after four decades together, they have no intention of stopping anytime soon: “I’ve done other jobs, and this is the best one so far.”

FOR TICKETS TO SEE THEY MIGHT BE GIANTS LIVE IN CONCERT, HITTING PHILLY AND NYC THIS WEEK, VISIT THEIR WEBSITE!