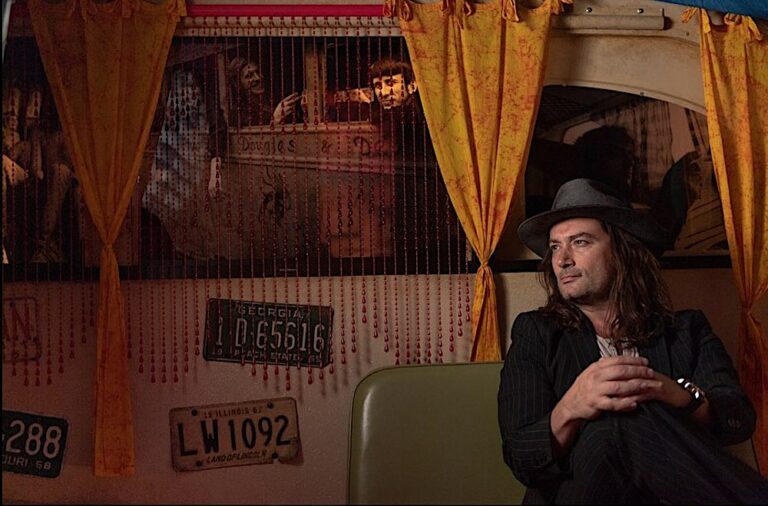 More powerful and passionate than ever, our longtime friend Constantine Maroulis continues to share his love for the arts, prove his talents, and release his inhibitions in ways that enamor us all.

Singer-songwriter/actor Constantine Maroulis has happily lived in Bergen County, New Jersey for years now – but on the day of this interview, he seems content as he enjoys Moroccan mint tea and chicken soup at Café Mogador on St. Marks Place in New York’s East Village neighborhood. “I was born here in the city, in Brooklyn, and lived here for most of my adult life,” he says. “St. Marks brings back a lot of memories, for sure, so it’s nice to come here.” He’ll have another reason to return to New York later this month when he’ll headline a show on January 29 at City Winery. It will mark the his first time he’s played for a Manhattan audience since March 2020.

In recent years, Maroulis has undertaken highly successful tours with Foreigners Journey (a band that mainly covers classic rock hits) or performed concerts that center around songs he did while starring in the long-running Broadway show Rock of Ages, but for his City Winery appearance, he plans to mainly focus on his own songs.

“This is me solo, so it’s going to be my original material, predominantly from my first record [Constantine, 2007], my last record, Until I’m Wanted [2020], and songs from my forthcoming album that will be out this year,” he tells us. “I really feel it’s important to play a dozen or so of my own songs.” He adds that that his upcoming album doesn’t have a title yet, but the first single from it, “Daydream,” will be released “shortly.”

Fans who first found out about Maroulis from his star-making turn on American Idol in 2005 will be happy to hear that he may also perform some of the same material that he sang on that show. “You might hear a little Queen in there, who knows?” he says, likely referencing that band’s song “Bohemian Rhapsody,” which was one of the most popular selections he did as an Idol contestant.

Regardless of what his City Winery setlist ultimately includes, Maroulis says he is equally passionate about performing all of the songs in his vast repertoire. “Whether it’s a song I wrote, or co-wrote, or that I am interpreting, I think it’s about storytelling. It’s about connecting and internalizing the lyric and really giving each song a different story. Every song has a different narrative. So, for me, the approach doesn’t really change: you serve the song.”

Maroulis says he first realized that he had an exceptional talent as a singer when he was “very young.”

He continues, stating, “I knew that I was in a different level than everybody else, as far as singing among my peers. From five years old, probably.” Unfortunately, he had to battle extreme stage fright for the next 15 years or so after that. “I would get the parts in my chorus musical, then I would get up there and bomb. Bomb,” he accentuates. “I was afraid people would hear my high singing voice. I thought that boys would make fun of me.” He admits that even after 30 years (and numerous career successes), some of that fear still lingers, but now he sees it as a source of motivation: “I don’t know if you ever get over it – and I don’t know if you should.”

Despite his fears, Maroulis never waivered in his love for singing in itself. Besides belonging to his school chorus, he was also largely self-taught. By the time he was 10 years old, he was “blasting Jesus Christ Superstar and singing every part, watching movie musicals, and singing to Bon Jovi tapes.” That passion for music led him to study music theater at the prestigious Boston Conservatory, followed by an acting apprenticeship at the Williamstown Theatre Festival. From there, he landed off-Broadway roles, then got a part in the popular show Rent.

All that work meant that by the time Maroulis appeared on American Idol, he was a seasoned performer – and it showed. He became one of that show’s most popular contestants (though Carrie Underwood ended up winning that season). That, in turn, led him to star on Broadway in Rock of Ages (for which he earned a Tony nomination) and in Jekyll and Hyde.

Between his music and his acting work, Maroulis has kept constantly busy – and he intends to stay that way. “We’re developing this new musical,” he shares. “Whether we open first off-Broadway or transfer there after it becomes a commercial production somewhere else, I’m excited for that, for sure. You might get to hear a lot more about that in the coming weeks and months… There’s just not a lot I can say about it right now because we’re just not prepared to really roll it out, but needless to say, the opportunity to create an original lead role again thrills me.”

The performer also notes that he’s got a non-scripted (and non-music-related) show in the works, yet he is once again unable to reveal details at this relatively early point in the development process. Beyond that, he is a doting dad, a football fan who ‘bleeds blue’ for the NY Giants, and, of course, a theater lover. “There’s a couple of theatrical endeavors I might get behind as a producer, as well. I’m always developing projects that I’m passionate about. I wake up hoping to have a lot to do that day.”

Maroulis says he inherited his impressive work ethic from his parents, who also taught him how to be responsible with money – both skills that have proven invaluable as he’s navigated the uncertainties of a career as an entertainer.

“My parents were always frugal,” he explains. “They both worked full-time – pretty normal jobs – and they knew how to save. My father would fix things and he would make sure he bought things that he knew would last, so I’ve always had that mentality. In fact,” he says, plucking at his sleeve, “this sweater is a gift my grandmother gave my father when my parents got engaged. It’s from the 1950s and it looks practically brand new!”

These are lessons that he’s hoping to impart to his own daughter, who is now 12 years old. She may or may not follow in her father’s show business footsteps, but he says he’s fine with whatever she chooses to do, as long as she’s happy. That is, after all, the guiding principle he has always followed for his own career.

“I recognize that I have a gift,” Maroulis says. And now, he adds, “I don’t think I’ve ever sounded better as a singer, and more powerful. I certainly hope that I can keep that going another 20 or 30 years.”

FOR TICKETS AND INFORMATION ON HOW TO SEE CONSTANTINE MAROULIS LIVE IN NYC AT CITY WINERY (WITH PETE MULLER AND THE KINDRED SOULS) ON JANUARY 29, CLICK HERE!