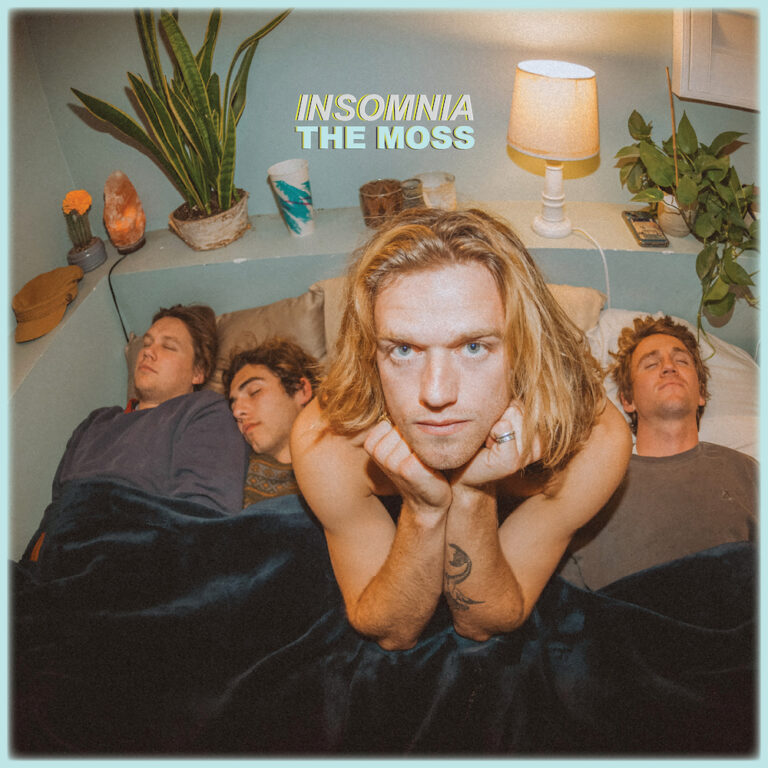 The Moss EP ‘Insomnia’ Is All Hearts, Beats, & Surf-Rock Guitars

Off-beat, indie, bohemian soundsters, The Moss, shout its flavor of vivacity from the rooftops in its latest EP, Insomnia. Now based in Utah, the foursome’s probe youthful romance, pairing it with uppity guitar reverb and harkening to the founding members’ island days on Oahu. As a whole, Insomnia shares elements of the band’s 2021 release Kentucky Derby in its sound and romantic themes while feeling like a fresh departure.

Comprised of four songs, the EP kicks off with its namesake. The lyrics are earnest and open-hearted: “Waking up next to you, it feels too good to be true,” for example. Kentucky Derby fans who identified with tribulations of the heart will find the same kind of lyrical exploration here. Optimistically, the anxieties and newness of a romantic interest come pouring out against the backdrop of a pulsing kick drum and electric guitar. “Insomnia” mirrors the hopeful uncertainty of new love while the instrumentation mirrors the pounding heart and racing mind; the lyrics put the sensations to words at a frenetic pace, and the listener, who looks, finds their own shared experience.

“Blink” is the second song on the EP and dives into the depths of romantic loss. Dramatic and contemplative, it’s as universally relatable as the latter. The fears and vulnerabilities we’ve all jotted in a journal and didn’t dare say aloud come streaming out as escorts to reverberating surf-rock-nodding guitars. “Hold me like it’s never going to end. Please change your mind. If I lose you, I may never love again.” Who among us has not uttered these words to themselves? The beat, vibe, and vocal inflection feel vaguely reminiscent of Ryan Adam’s heart-achey-ditty “Anybody Wanna Take Me Home” from his 2004 album, aptly titled, Love is Hell.

Where “Insomnia” opens with some discordant sounds and conversational banter, “Blink” and “Carousel” each kickoff with bold lyrical provocations – and sparse guitar – which visually, I imagine as two waves of sound parting to make room for the sentiment to stand firmly on some sandy beach, flanked by the music on either side. The beat comes flooding in again on “Carousel” after the question that anchors the song has been asked: “Why is everybody so crowded all the time?” One part practical advice on managing an impending panic attack and one part navel-gazing, “Carousel” doesn’t have the dimensions of the earlier songs. The musicality is the most interesting part of the song. Had it been mixed to soften the lyrics leaning more into the variety of guitar licks, tempos, and transitions, and away from “setting the scene” with an opening question, the pop song could have reverberated with a different resonance.

The EP’s closing song is called “Chapparal.” The instrumental opening feels like the perfect amount of runway for the song to take off. It’s supremely interesting to me because it has a straight-up pop sound with a hint of surf rock, but then it settles into a reggae-like groove before it works through the pattern all over again. Here, the ratio of vocals to music feels right. The lyrics work as another component to the song as opposed to feeling like the main act.

Insomnia is sure to become a fan favorite. It has all the hallmarks of what makes The Moss beloved by its fans: authenticity, fervor, and optimism. The guys bring ferocity to their lyrics, vocals, and instruments, and, in doing so, create space for fans to relate to love, anxiety, loss, and a range of human emotions. The Moss has my applause for its brave plunge into a range of sounds, proving they are as open minded and hearted as they say they are.

THE MOSS’ NEW EP, INSOMNIA, IS OUT TODAY ON ALL DSPS! CHECK OUT THE MOSS BY FOLLOWING THEIR INSTAGRAM!