NEW YORK, NY—In the lead up to PJ Harvey’s appearance at Irving Plaza, the capacity-crowd that packed the Fillmore buzzed with an energy and a sense of uncontrollable excitement which I haven’t felt at a gig in a while. When the English singer/songwriter finally braced the crowd, if there was such a thing as a standing ovation at a venue like Irving Plaza, well Polly Jean almost certainly received one. The entirely overage crowd was, on the most part, made up of long-time Harvey lovers, whose roars and cheers were almost deafening. I’m fairly confident that most of the noise roused was for the songbird herself, rather than her counterpart John Parish, but it didn’t really matter either way because at this gig, Harvey seemed more than happy to share the stage and the spotlight. 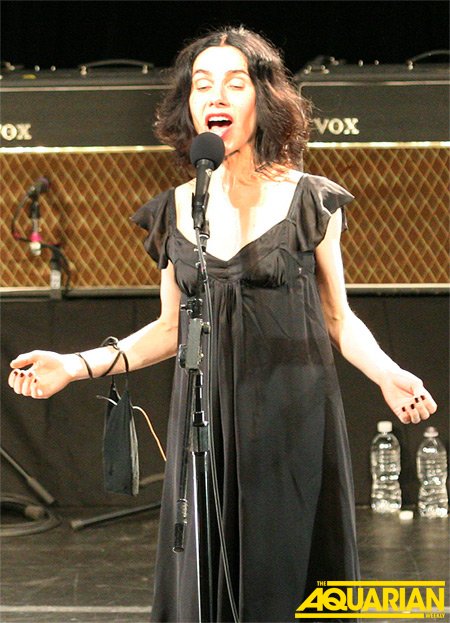 But don’t get me wrong—this doesn’t mean her quirkiness or zany approach was any less present. If anything actually, the men surrounding her onstage seemed to support and encourage the eccentricity that fans have come to know and love through her 18-year music history. While she was animated and artistic throughout the show, I can’t help but feel her performance was more restrained than usual—which wasn’t such a bad thing. She also seemed more positive than normal—which was mildly refreshing. What was irritating, however, was the way she carried herself. She wasn’t wearing any shoes, and fluttered around the stage like a lost little pixie. I know Harvey gets carried away in her music, but there’s a certain point where witnessing this “freedom” just becomes annoying. I mean, really, you would think after years in the biz that Harvey would at least have some decent stage moves up her sleeve.

But I can’t fault her for long. Even after 18 years, she’s just as dedicated and passionate a performer as ever—and covered a lot of ground, including the spoken word. A lot of thought was put into the aesthetics of the show; Harvey was carefully positioned in the center of the stage, wearing a skimpy black dress that matched the dark suits and top hats worn by the men that surrounded her. And despite the average age of most of the performers, the show was exciting and fresh, and the package they presented under the spotlight had an element of class that simply can’t be taken away from it. Highlight tracks were “Black Hearted Love” and “Sixteen, Fifteen, Fourteen.”

While Harvey’s nearing on two decade in the industry, I wouldn’t say she’s anywhere near the end of her lifespan, or even close to it because she’s possibly got some of the most loyal fans I’ve seen. Worthy or not, they’ll stick around to support her for as long as she keeps putting on shows. While I enjoyed this one, I didn’t love it. Harvey falls into the same category as Tori Amos for me. They’re artists who are good to see once in a while, but far too whacky to have any type of long-lasting musical commitment to. At the very least, however, it’s always refreshing to see someone on stage who genuinely appears as though they’re equally as crazy once the stage lights have been turned off. It paves the way for entertaining post-gig wrap ups, and makes the rest of us feel a little more balanced.