MANCHESTER, TENNESSEE—It was a mash up of styles and genres at this year’s Bonnaroo fest in Tennessee, as more than 100 acts took on five main stages plus at the 650 acre site. Located an hour’s drive from Nashville and a stone’s throw from the Jack Daniel’s distillery in Lynchburg, its central location provides a nexus on band’s summer touring schedules and a lightning rod to some of the season’s finest acts.

This year’s model, its ninth, was an eclectic one as jam bands united took a collective backseat to funk/soulster Stevie Wonder and rapper Jay-Z’s Saturday night headlining slot, yet returned on Sunday with Dave Matthews Band for the grand finale. But The Flaming Lips’ hyperactive reworking of Pink Floyd’s Dark Side of the Moon was the fest’s highlight. It went down like a psychedelically bombastic toast to Alice In Wonderland trippy-ness with headmaster Wayne Coyne at the helm taking on the crowd inside a bubble, shooting off confetti, twirling lights and megaphoning his way through the band’s awe-inspiring and mind numbing replay of the Floyd classic from 1972.

Their version was a jumbled, kinetic and stampeding overdrive to the original’s slow and meandering weave. The mechanized clatter on “Breathe” built into a crescendo of peaks and valleys that the band pushed and pulled at for its opus, teasing the crowd with the original’s foundation yet staying true to the twisted and contorted Lips ethos that ended with the climatic “Eclipse.”

‘60s and ‘70s acts prevailed from the roots-reggae of Jimmy Cliff to the swampy howling yodels of John Fogerty who commanded the fields on Sunday afternoon. Jeff Beck’s hypnotic tweaking of notes, feedback and tone from his guitar was incredible to watch and ponder, “How does he make those sounds?”

Acoustic acts also prevailed, adding a welcome respite to the pounding rock acts with John Prine, Kris Kristofferson and Steve Martin fingerpicking their ways into the heart and minds of the weary. Kristofferson’s set went down like a love letter to good ole times. The Rhodes scholar turned matinee idol’s whiskey stained vocals were well-placed amidst the mud and funky cow doo stank that permeated the venue next to a Ferris wheel that added a state fair-like vibe to the festivities. Another comedian/actor Steve Martin clawhammered on banjo with his band, adding some incredibly dry wit to his set and closing with a bluegrass version of his 1978 novelty hit “King Tut.” 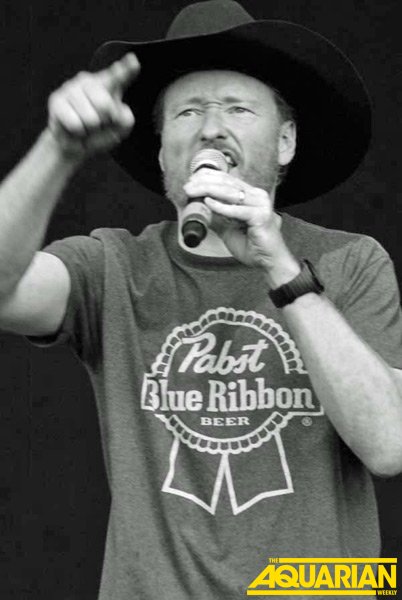 Tenacious D, the Mutt and Jeff of mutated, heavy metal folk-rock played it like a Spinal Tap re-run. Poking fun at themselves in serious jest, their acoustified blow out went down like a tongue-in check self-parody sans bad hair and tight pants. In its place were two beer-bellied brutes.

Introduced by “disgraced” Tonight Show host Conan O’Brien, who also played at the comedy tent with Margaret Cho amongst others, messengers Jack White and Kyle Gass quickly got down to the business at hand plowing through their set adding doses of comedic relief on “Kielbasa” that showcased their stellar musical chops in the sweltering heat. The self-proclaimed “greatest band on earth” put acoustic guitars back on the map as they riffed off each other on chunky Gibsons matching their overblown and obnoxious ‘tudes with some badass strumming.

Jack White’s band The Dead Weather was a full-blown tour-de-force onslaught of gutsy rock that squelched and howled its way to the pizza stands and organic composts that dotted the festival grounds. Singer Alison Mosshart of the Kills writhed and wrenched her vocals cathartically to White’s primal four-to-the-floor drumming that band mate Dean Fertita of Queens Of The Stone Age added his burning fretwork to. Their’s was a glorious and dirty counter to some of the event’s mellower acts that this fest could have used a little more of.

Kings Of Leon returned to Bonnaroo for the third time and played the arena rockers “Sex On Fire” and “Be Somebody” off Only By Night in their Friday night headlining spot. Norah Jones kept it country on guitar on the Neil Young cover “Barroom Blues.” Tori Amos played a somber version of Nirvana’s “Smells Like Teen Spirit.” She & Him’s Zooey Deschanel & M. Ward were a confectious unit of ‘60s pop and Regina Spektor had the early afternoon crowd in stitches with “Sailor Song.”

Jay-Z masterfully worked the crowd, ripping off every other popular riff from the ‘70s on the way that the crowd ate up. Hits like “Hard Knock Life,” “Big Pimpin” and “Empire State of Mind” kept the crowd singing along.
Stevie Wonder’s set was an incredible one that took on his massive catalogue. Dressed in a white jumpsuit, he started on his clavinet and slowly worked his way to the keyboards alternating between his soulful 60’s Motown hits and the urbanized 70’s funk of “Living For The City,” “Higher Ground” and “Superstition” backed by a solid 13-piece backup band.

Conan O’Brian summed up his Bonnaroo experience during his act citing “I love nothing more than doing comedy in a tent at one in the afternoon for people who haven’t slept for two days.” He added, “This is a big day for me. In six months I’ve gone from hosting The Tonight Show to performing at a refugee camp.”