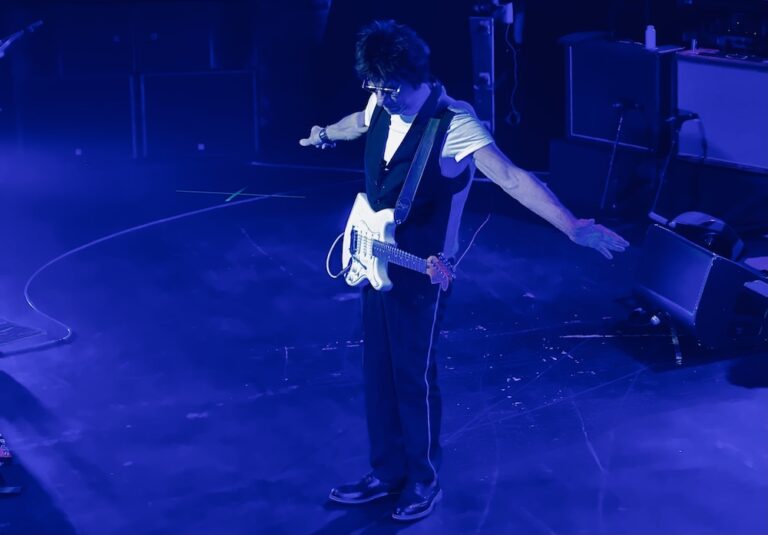 Jeff Beck, master of the Stratocaster, evolutionary musical magician, and guitar legend, has passed away. He was 78.

Great losses carry with them a deep heaviness of the heart and fog of the mind. Conceiving of a world without someone who helped to change it can often leave us without the memory of how to breathe. When it relates to the universal language of music, the loss becomes an especially united pain. Jeff Beck will forever be held in the hearts of his peers, loved ones, and fans as both the best guitar player in history and one of the most beautiful souls to ever grace our presence.

The innovative and influential English guitar legend left us suddenly on Tuesday, January 10, announced by a statement that followed on Wednesday afternoon. “On behalf of his family, it is with deep and profound sadness that we share the news of Jeff Beck’s passing. After suddenly contracting bacterial meningitis, he peacefully passed away yesterday. His family asks for privacy while they process this tremendous loss.”

His death has hit the world hard. For me, to say that writing these words is both surreal and deeply saddening, is a pure understatement.

Beck was many things. He was a son, a brother, a husband to Sandra (his beloved wife of 17 years), a vegetarian and animal activist since 1969, a ‘Ford Hot Rod’ enthusiast and builder, dear friend, mentor, and ultimate musician. Simply put, he was a boy with a guitar who was handed unique, cosmic, and historic abilities that he understood how to navigate with ease. He had the courageous proficiency to translate the most complex, astounding musical instruments and voices with his Stratocaster. He sang with a six-string extension of his body, guided by his instinctual ear that was forever drawn to pure sentiment and melody. His artistry defied limits and genres. His use of such melody, tone, and dynamics will remain unmatched. He could rawr like a lion while using only the weight of a feather.

In 1965, the eight-time Grammy-winner began a stratospheric rise from bands to a solo career filled with never ending exploration. He succeeded Eric Clapton and joined his childhood friend Jimmy Page in The Yardbirds. “The six stringed Warrior is no longer here for us to admire the spell he could weave around our mortal emotions. Jeff could channel music from the ethereal,” Page stated Wednesday on social media. “His technique unique. His imaginations apparently limitless. Jeff I will miss you along with your millions of fans. Jeff Beck Rest in Peace.”

Immediately after, he cemented a perpetually historic duo with Sir Rod Stewart from 1967 to 1969. On Wednesday, Stewart, too, wrote of that time. “Jeff Beck was on another planet. He took me and Ronnie Wood to the USA in the late 60s in his band the Jeff Beck Group and we haven’t looked back since. He was one of the few guitarists that when playing live would actually listen to me sing and respond. Jeff, you were the greatest, my man. Thank you for everything. RIP.”

His most recent endeavor was what would become his final album 18, released on July 15, 2022. It was crafted with his “long lost brother,” musician and three-time Academy Award nominated actor Johnny Depp, which they subsequently toured to support. Depp spoke of living with Beck throughout a difficult time in his life during an interview they did on a Sirius XM Town Hall special (hosted by Stevie Van Zandt) back in October. “Very simply and kindly, Jeff and his wife Sandra just took me into their house, and I lived with them for months and months and months.”

These moments in time became poetic bookends of musical soulmates and friendships for Beck who were by his side throughout his vast and respected career. After spending his last months creating and performing on the road with Depp, he departed from this earth the day after Page’s 79th birthday, on Stewart’s 78th.

I recently wrote in what is officially my last published album review of Beck’s that he “was plucked from the heavens (and surely the Gods were unhappy to let him go).” Now it is us earthlings in that heartbreaking position, with the Gods regaining one of their very own.

To say that Jeff Beck was a God of his craft will never negate the stunning humanity he carried with him in life. He was kind and unselfish, a true champion of those with ultimate promise, sharing the spotlight generously, especially basking in the glow of fiercely talented women: Jennifer Batten, Rhonda Smith, Tal Wilkenfeld, Anika Nilles, Joss Stone, Beth Hart, Olivia Safe, Carmen Vandenberg and Rosie Bones, Vanessa Freebairn-Smith, Lizzie Ball, Imelda May, Imogen Heap, and many more.

Wilkenfeld stated warmly, “Jeff, thank you for believing in me before anyone else did. You stood behind me & told everyone to take me seriously. You treated me like a daughter to the point where Wikipedia actually thought that was true. Actually, I did too.” She continued “We lost our favorite guitarist, and we also lost one of the most intelligent, intuitive, hilarious people I’ve ever met. I miss you so much Jeff.”

May echoed many sentiments by writing, “Innovator, creator, mentor, friend, family, the best that ever was or will be. Already feels dark without him. Greatest guitarist in the world. Finest friend you could wish for.”

A pioneer in music, Beck transcended artistic boundaries, paving an incendiary path for anyone willing to attempt the journey. All admittedly got lost along the way, however their endless gratitude for the given knowledge and inspiration did reach the desired destination. Beck was considered by the world’s dubbed “guitar Gods” as the best. Period. He was their Guitar God. Having worked with and deeply inspired greats that include Stewart, Depp, Ronnie Wood, Sir George Martin, Terry Bozzio, Tony Hymas, Jan Hammer, Vinnie Colaiuta, Buddy Guy, Stevie Wonder, Les Paul, B.B. King, Jimi Hendrix, David Bowie, David Gilmour, Brian Wilson, Billy Gibbons and ZZ Top, Billy Joel, Joe Perry, Mick Jagger, Ozzy Osborne, The Edge, and infinite others, many whose personal sentiments are scattered throughout social media to say it all.

Wood felt like “one of my band of brothers has left this world, and I’m going to dearly miss him,” adding a thank you “for all our early days together in Jeff Beck Group, conquering America.” Perry called him “the Salvador Dali of guitar” and “the ultimate 6 string alchemist” with Gibbons stating that “Jeff was a wondrous soul and we already miss him tremendously.”

“Jeff Beck has left the building and it is a lonelier place without him.” – Paul McCartney

“He was a unique player with a touch and feeling that was his alone. He leaves a great legacy and a sad space in the world of guitar.” – Andy Summers, The Police

“I can’t get used to the idea that Jeff Beck is gone.” – Tom Hamilton, Aerosmith

“Thank you for always playing from the heart, Jeff.” – Robbie Robertson, The Band

“There will never be another Jeff Beck.” – Warren Haynes, Gov’t Mule

“His gift was impossible to copy and won’t be repeated.” – Rick Springfield

“From The Yardbirds and The Jeff Beck Group on, he blazed a trail impossible to follow. Play on now and forever.” – Paul Stanley, KISS

“As a singer and guitarist, I wanted to be Jeff Beck and Rod Stewart rolled into one— we all did.” – Sammy Hagar, Van Halen

“He taught a lot while never claiming to be a teacher.” – Bootsy Collins

“He was an astounding guitar player with more ways to make you go, ‘WTF was that?’ [more] than anybody else.” – Joe Satriani

“The guitar heroes guitar hero has gone off to join all the best players. A true and loyal friend. I’ll love you always Jeff.” – Chrissie Hynde, The Pretenders

During Beck’s second induction into the Rock and Roll Hall of Fame as a solo artist in 2009, it was Page who inducted Beck, bringing him to tears. “He leaves us mere mortals, believe me, you know, just wondering and having so much respect for him.”

Those of us who knew and were deeply effected by Beck are going to have a hard time understanding the world without the color he brought to it. The only thing that brings me personal comfort is the open joy I witnessed during the last show I will ever have the honor to see. The audience showed him such love, that at times he was so caught up in it, he forgot to play his guitar. He graduated this life peacefully and in what appeared to be an elevated place of both personal and professional enlightenment.

I was first astounded by his mind-bending genius in 1999 in the fifth row at Waterloo Village in Stanhope, New Jersey at just 12 years old. My farewell show was this past October, the 15th, at The Paramount in Huntington, New York where I floated above him in the Sky Bar, soaking up every micro expression and sound. My Jeff Beck experience was bookended by equidistant, unparalleled experiences where time evaded me. I was encompassed by unshakable emotion and in the end was beautifully hoodwinked by sets that felt as if they were over in a blink of my eyes.

The same can be said for his extraordinary life and career. Thank you for everything, Jeff. “Fly on, sweet angel.”