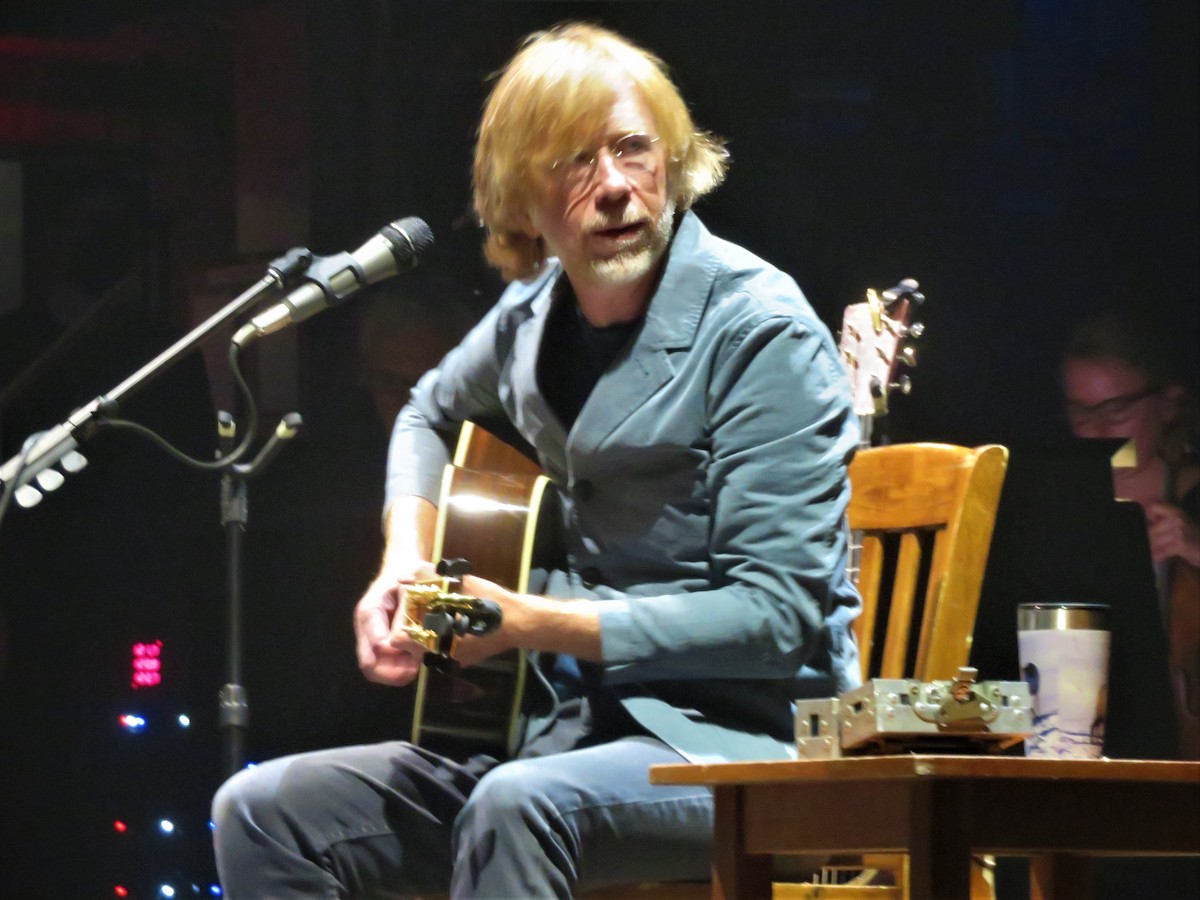 Ernest Joseph Anastasio III, better known to the world as Trey Anastasio of Phish, resides in Manhattan’s Upper West Side with his wife and two daughters. He seems to have an affinity for his neighborhood concert hall, the Beacon Theatre. During the pandemic in 2020, he performed the Beacon Jams, eight live streamed concerts from that stage, playing in an otherwise empty venue. With the city now in the early stages of reopening, he returned to the theater this week for the venue’s first two full-capacity concerts in more than a year– for vaccinated Phish heads only.

Even before the lights dimmed, the Phish heads were reveling at the re-bonding of this community from virtual to live. Yet, on opening night, mysteries remained. What form would the show take? Would it be a truly solo acoustic show or would Anastasio recruit accompanying musicians? Would Anastasio play Phish songs, solo songs, maybe even new songs? The lights dimmed, Anastasio took the stage and the audience’s sustained cheers were louder than a tornado. It was apparent that the audience was going to love whatever Anastasio was planning on doing on that stage.

Anastasio started the performance as a solo acoustic artist, using loops for accompaniment. For most of the show, however, he was accompanied by pianist Jeff Tanski and a string quartet, the Rescue Squad Strings (Katie Kresek and Maxim Moston on violin, Rachel Golub on viola, and Anja Wood on cello). The evening’s entire repertoire was comprised of songs Anastasio composed and recorded with Phish. While the songs were familiar to the fans, Anastasio gave all the songs new arrangements to accommodate the very different set-up.

Unlike at Phish’s arena concerts, the Beacon Theatre’s more intimate environment allowed Anastasio to build camaraderie with the audience and get playful, toying with inside humor. As he first took the stage and absorbed the lengthy and thunderous ovation, a grinning Anastasio for a brief moment turned his chair to face the back of the venue in a knowing nod to the direction he faced during the Beacon Jams. Later, he announced between songs that a major celebrity was in the house and after a build-up, he declared that it was nurse Heather MacDougal, a fan he made famous by calling out her name during the Beacon Jams. Towards the end of the show, he recalled how the last time he saw his late bassist Tony Markellis was at the end of a Beacons Jams show, not knowing that Markellis would die in April. Many touching or playful moments endeared himself more deeply with the audience.

How could the fans not love this return to live entertainment? The string-dominated songs were a bit rigid in structure and they did not rock like Phish or Anastasio’s side bands. Did the fans come to hear classical re-workings of Phish favorites? Not really, but they were performed beautifully. Did Anastasio get to wail on his guitar? Not much. With the string quartet reading charted music, Anastasio had to relinquish his jam style and stick with the basics in order to keep his musicians in tow. This was not Anastasio’s greatest musical moment, but that did not matter nearly as much as the joy he brought to the room.