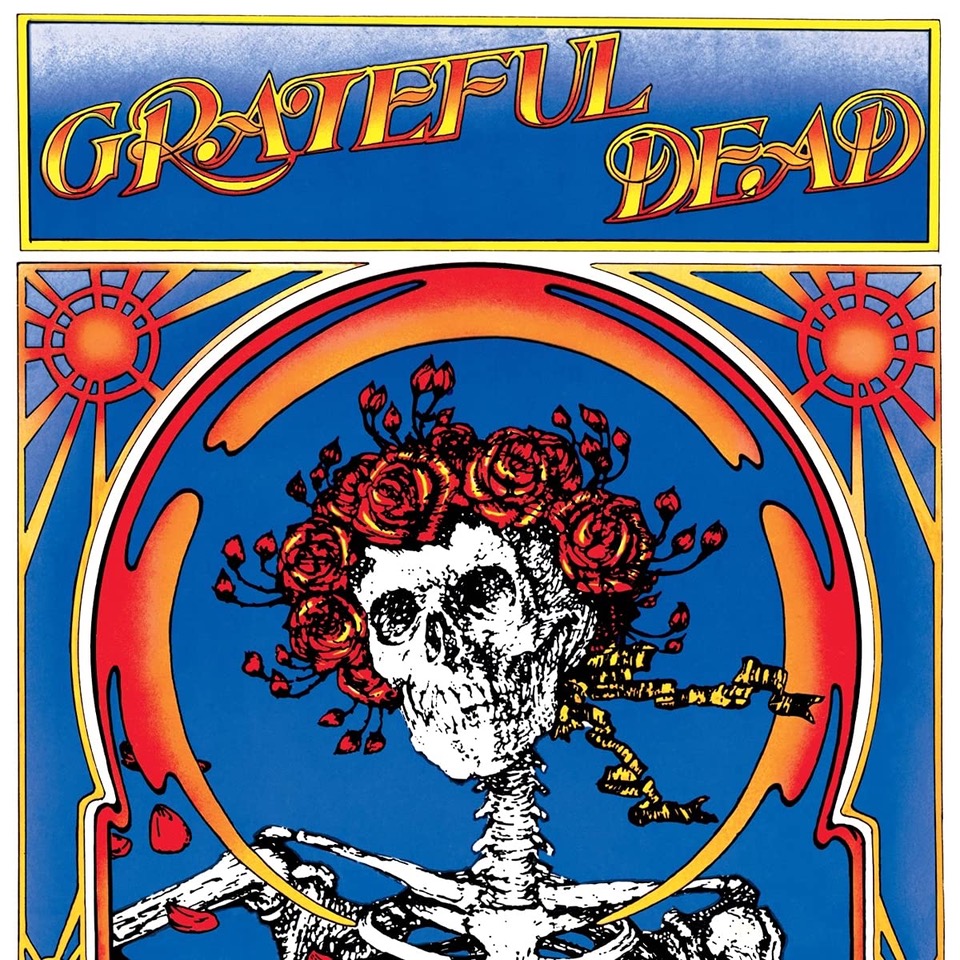 On The Record: An Expanded Edition of the Grateful Dead’s ‘Skull & Roses’ LP, plus Crowded House and Reigning Sound

An Anniversary Edition of the Dead’s Second Live Album

Like the Beatles’ so-called White Album, the Grateful Dead’s eponymous second concert LP (following 1969’s well-named Live/Dead) has come to be known by a description of its cover art: Skull & Roses. The record, which appeared in October 1971, contains performances from March and April of that year at seven New York and San Francisco concerts. At the time, the group was enjoying the back-to-back successes of Workingman’s Dead and American Beauty, which had been released within five months of each other in 1970. Those albums find the Dead forsaking their earlier extended jams and psychedelic bent in favor of tightly constructed, melodic country-rock that emphasizes prominent, harmony-laden vocal work.

The 11-track Grateful Dead (Skull & Roses) – which features the band’s original lineup of Jerry Garcia, Bob Weir, Ron “Pigpen” McKernan, Phil Lesh, and Bill Kreutzmann – doesn’t sound much like those LPs. Indeed, it draws no songs from either of them. It does include nods to country, but it paints a picture of a more versatile group, employing funky rock and offering a return to psychedelia via its centerpiece: an 18-minute version of Bob Weir and Bill Kreutzman’s “The Other One,” which first appeared on 1968’s Anthem of the Sun. There are also a couple of Jerry Garcia/Robert Hunter cowrites, the rocking “Bertha” and “Wharf Rat,”  a wino’s tale, as well as the infectious “Playing in the Band,” by Hunter and Weir. The rest of the album consists of imaginatively arranged country and rock covers, among them Kris Kristofferson’s “Me & Bobby McGee”; Chuck Berry’s “Johnny B. Goode”; Merle Haggard’s “Mama Tried”; “Me & My Uncle,” by John Phillips of the Mamas and Papas; and a nine-minute medley that weds Buddy Holly’s “Not Fade Away” to the traditional “Goin’ Down the Road Feelin’ Bad.”

As much as the fans liked Workingman’s Dead and American Beauty, they apparently liked Grateful Dead (Skull & Roses) even more, buying enough copies to make it the group’s first gold record. And with good reason: while no single song here proves quite as dazzling as Live/Dead’s “Dark Star,” the band impresses consistently, delivering solid new originals, all of which became concert staples, as well as covers that showcase strong interpretive abilities and affection for the Bakersfield Sound.

Now, a 50th anniversary edition of the album offers good reasons to upgrade from old copies: the original record – a double LP that later fit on a single CD – has been well remastered for this release, and it is accompanied here by a second disc that delivers a pristine recording of a previously unissued July 1971 Fillmore West concert.

Granted, that 10-number concert, which doubles the album’s length to nearly two-and-a-half hours, duplicates some tunes from the original release. Granted, too, the Dead catalog now includes approximately five gazillion other concert recordings. That said, the second disc’s versions of songs that also appear on the first CD – especially “The Other One” – are worth hearing, and there are also some extremely noteworthy performances of numbers that aren’t on the original release, including an affectionate 10-minute reading of another Haggard classic, “Sing Me Back Home,” and a nearly 18-minute take on “Good Lovin’” that sounds vaguely like the Rascals’ original hit for about two minutes before veering off into classic Grateful Dead jam territory.

As the group observes on American Beauty’s “Truckin’,” “What a long, strange trip it’s been.” And thanks to the reissue series that this anniversary edition of Grateful Dead (Skull & Roses) continues, it’s not entirely over yet.

The Return of Crowded House

During the past decade, a more appropriate name for Crowded House might have been Abandoned House. Though prime mover Neil Finn has kept busy with solo projects – including his own CDs and playing with Fleetwood Mac – the group has not performed or issued any new studio albums since 2010’s Intriguer.

Don’t dream it’s over, though, because it’s not: after a 10-year hiatus, Crowded House are back (sort of) with a seventh studio LP called Dreamers Are Waiting. I say “sort of” because after numerous personnel changes, the group now includes only two founding members, vocalist, guitarist, keyboard player, and principal songwriter Finn and bassist Nick Seymour.

Rounding out the current band are keyboardist Mitchell Froom, who produced the first three Crowded House albums as well as many other records, and Finn’s multi-instrumentalist sons, Liam and Elroy, who get songwriting credits on several of the 12 tracks. (Finn’s brother Tim, who played with him in Split Enz, also gets a composing credit and his wife, Sharon, provides backing vocals on one number. Maybe the most fitting name for the group at this point would be Finn’s House.)

Given all the changes, it’s not surprising that Dreamers Are Waiting doesn’t sound quite like the group’s early work. It does, however, recall Finn’s solo albums with lush, richly textured, understated music that may not grab you immediately but ultimately gets into your head and stays there. Ear candy like “Start of Something,” the dreamy “Goodnight Everyone,” and the Beatlesque “Real Life Woman“ are among the many reasons to pick up this CD.

Vocalist/guitarist/songwriter Greg Cartwright has long been the only constant factor in Reigning Sound, a group that has been releasing records with various personnel for 20 years now. Listening to the new A Little More Time with Reigning Sound – their first CD in seven years and one that reunites the original band – you’ll understand why Steve Van Zandt has championed their blend of soul and garage rock. What you won’t understand is why these guys aren’t famous.

Cartwright is a compelling vocalist and terrific songwriter, and the other four players in his high-octane band – who add percussion, bass, keyboards, and background vocal work – know just how to approach his material. Guest musicians make significant contributions on cello, violin, and pedal steel.

Picking a favorite among the dozen tracks here would be tough. “Let’s Do It Again” is crank-it-up-and-mix-the-margaritas party music, as is the cover of Adam Faith’s “I Don’t Need That Kind of Lovin’,” the album’s only non-original number. Arguably even better are such emotive midtempo numbers as ““Oh Christine,” the country-tinged “Moving & Shaking,” and the majestic “I’ll Be Your Man.” This is one record you’re likely going to want to put in heavy rotation.