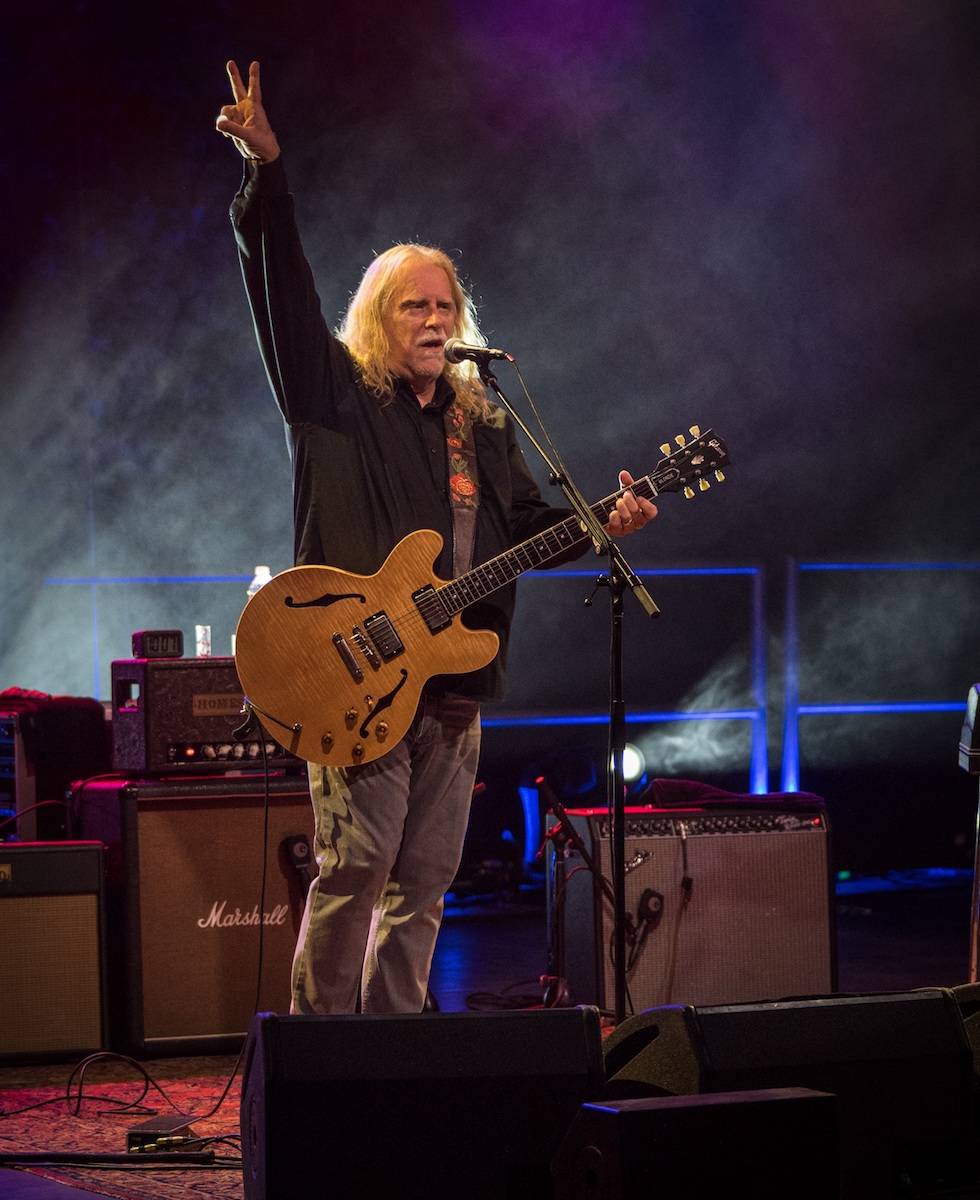 Summer nights and Warren Haynes go together like the Jersey Shore and a late afternoon rainstorm.  Such pairings converged on June 30 when Haynes took the stage at Suneagles Golf Club’s Concerts on the Green in Eatontown, NJ.

Tucked comfortably under a large tent, Warren Haynes satisfied his eager, albeit sweaty, audience with classic tunes such as “Sweet Melissa” by The Allman Brothers and a smooth-as-silk version of Van Morrison’s “Cyprus Avenue” along with the opener – a gripping rendition of “Dark Was the Night, Cold Was the Ground,” an old blues tune by Blind Willie Johnson that Gov’t Mule covered on their 2017 album Revolution Come…Revolution Go. Amid the heat and humidity, while fans quietly beckoned servers for more ice, Haynes, with only his guitar, held the room.

The tone seemed set for a blues-leaning night, however, it remained rooted in the soulful southern rock foundation embedded in Haynes’ sound. Through the morphing of “Fallen Down” into “Death Don’t Have No Mercy” and back again, this soulfulness was steady well into his second set, not only through the timbre of his voice but the tips of fingers as well with the way he hung onto and lengthened notes.  Somehow, Haynes emotes as easily from a slide as he does with his voice. He may have been foreshadowing with a taste of the bluesy new Gov’t Mule album releasing later this year.

While rain threatened the few stragglers outside by the merch booth, the audience, seated at tables, seemed unbothered by the sticky weather. They whistled, cheered, and watched, transfixed, excited to be catching Haynes on one of his few solo performances this summer.  Haynes made mention, meanwhile, of the heat making it “difficult to stay in tune” although he simply laughed it off, wiped his forehead with a towel and kept on playing.

His intensity drew in the crowd as he delved a bit deeper with each song. From “Ain’t Wastin’ Time No More,” another Allman Brother’s tune, he tackled Springsteen’s “One Step Up,” perhaps, paying homage to the Jersey boy he had recently spoke of as someone he would “love to” share a stage with. The effort drew hoots and hollers from the crowd. It was a bold choice, and the southern singer/guitar player did it justice.  The Boss would have been proud.

Notable highlights of the first set also included the Jim Croce cover “Roller Derby Queen.” The light-hearted song provided balance to the more introspective tunes such as “I’ll be the One” and “I Shall Return.”  Haynes played around with Croce’s song and had fun with the lyrics. Digging into his bluegrass repertoire, he brought out an old favorite of his to cover, Billy Edd Wheeler’s “Coal Tattoo.” Another original that fit perfectly into the mix was “Hattiesburg Hustle,” a song that naturally encompasses Haynes’ influences across genres.

After a short fifteen-minute break between sets, he delighted the crowd with his well-loved version of U2’s “One.”  It is one of those covers that the artist has made his own – much like Springsteen with “Jersey Girl” – Haynes’ rendition of “One” became a different, more intimate song once it fell into his hands. Then, keeping with the blues thread that ran through the night, Haynes busted out the 1920’s Jimmy Cox blues tune “Nobody Knows You When You’re Down and Out,” which has been covered by many.  His take was different, of course, as his southern rock/bluegrass/soul touch framed it as a Warren Haynes’ song.

As the night came to an end, fans were treated with the more obscure “Hallelujah Boulevard.”  The ethereal tune from Haynes’ Ashes and Dust solo album rounded out the covers, leaving the crowd with a bit of the songwriting that brought them there in the first place.

Warren Haynes gave the audience everything they came for, some of what they didn’t know they came for, and a lot in between.  This is the reason, once in a while in the crowd, you could hear, “It’s all about Warren.” This night was a demonstration of how, sometimes, a man, his guitar, and an empty stage can connect with the audience just as powerfully as a full stage if that man happens to be authentic, experienced, and not afraid to bare his soul. Thanks, Warren.