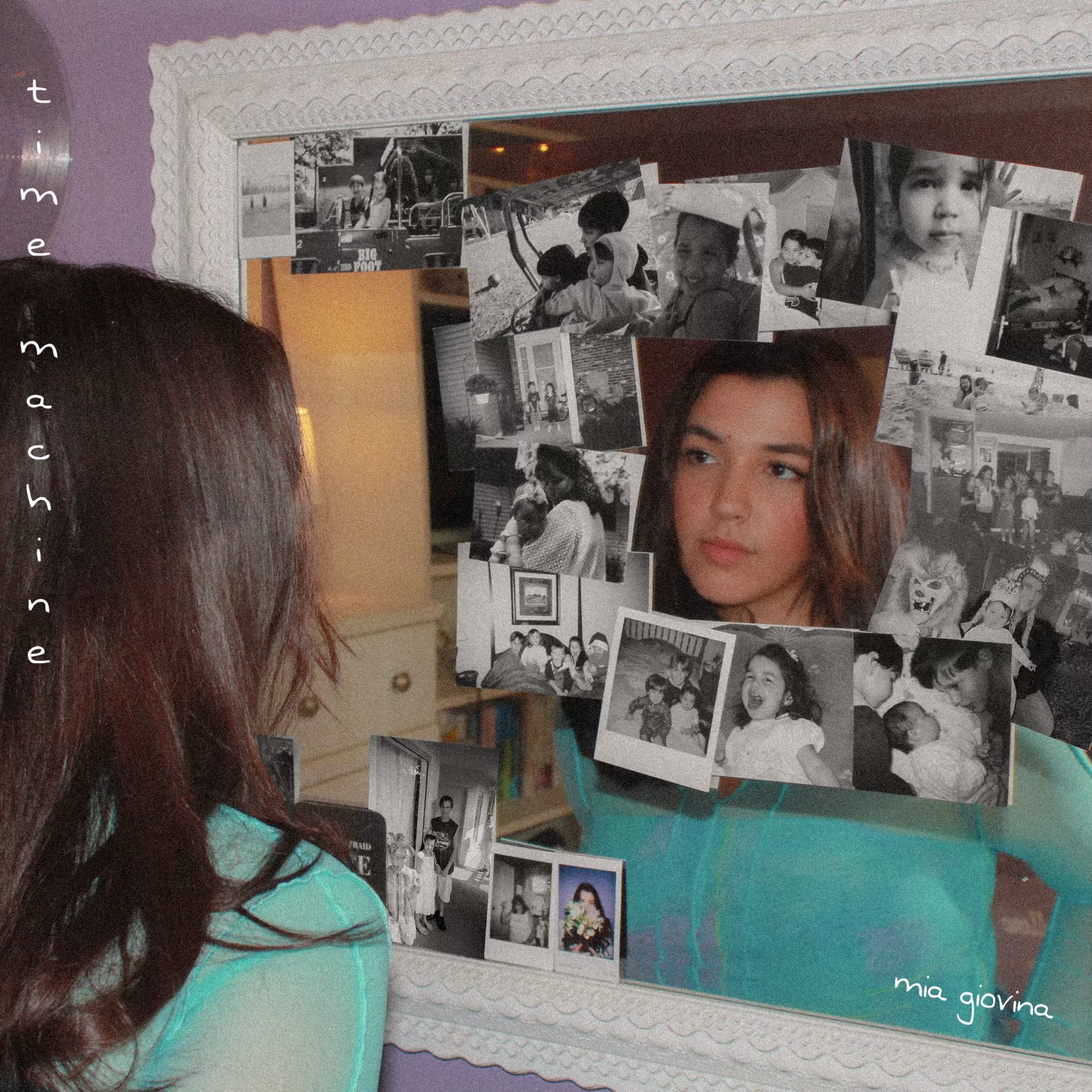 In a day and age filled to the brim with the Dixie D’Amelios and Addison Raes of the world, you should strive to be a Mia Giovina: genuine, passionate, hard-working, and – most importantly – talented.

Bit by bit, Mia Giovina has worked diligently to become one of the reasons that New Jersey natives are proud of their home state. With just her smart devices in hand and award-winning personality backing her up, Giovina has done just that. The contemplative artist with her honeyed vocals, understated hopeless romantic tendencies, and lush storytelling qualities is making her mark on the local scene just as much as she is nationally – even globally. Her debut single is just shy of 300,000 streams on Spotify alone, she has racked up over six million (!) likes solely on TikTok, and has expertly transitioned from trying to be an indie pop icon to actually being an indie pop icon. (Aesthetically pleasing Instagram content, a love for Harry Styles, caption-able lyrics, an appreciation for tote bags, a soulful method to crafting melodies, and all.) Her latest single, “Time Machine,” dropped two weeks ago today, so we caught up with the rising star to talk all things music and media in the modern world.

Right off the bat it feels appropriate to ask about the Garden State being that we, too, are based here. How has living in and around New Jersey played a role in your music, or even your approach to music, if at all?

Music has been my biggest love since before I can remember. I think that would have remained the same no matter where I grew up, but I do think living in my hometown definitely played a big role in my love for performing. I auditioned for my first musical when I was nine-years-old and continued doing so all throughout middle school and high school. I performed for the first time outside of school theatre at a coffee shop just five minutes away from my house! I spent every weekend in high school gigging at bars and restaurants super close to my house. I’m definitely lucky to have grown up in a place that had so many opportunities available to me!

What is like being a young person in the industry, taking strides to make their dreams come true? Do you feel that your youth gives you any sort of advantage when it comes to being an artist at this point in your life?

When I decided to skip college and pursue music full time, my biggest motive was the fear of not taking the risk of my dreams when I could. I was so afraid of looking back on my life in 30 years and regretting not chasing my wildest dreams when I was young. I definitely think my youth and possibly even lack of experience only makes me even more passionate and optimistic about my future.

Something about you that I, personally, adore is how candid you are. Whether it be in your music, online, on socials, or elsewhere, it feels like your rawness embodies you. This, in which, allows fans like me to look at you as more of a friend than anything else and hear your songs as conversational advice instead of some grand declaration I can’t relate to. How do you know how much of yourself and your life to put out in the world? Do you think about that when making posts online or going in to write a new song?

First of all, this question did, in fact, make me cry. I think when it comes to being raw, whether that be in a song or just on social media, I try not to put a ton of thought or pressure into it and I think that only adds to the rawness. I just try to look at it from another person’s point of view. If I were going through something and I saw somebody I admired writing a song about it or even just posting a simple video talking about it, I know I would feel a lot less alone.

Speaking of the web and how you seem to effortlessly blend it into your career path, did you ever think of going the social media route in terms of getting your singing and songwriting off the ground? Or did that just happen organically?

Though I would say the whole TikTok thing happened organically for me, I would be lying if I said I haven’t been posting singing covers on Instagram for years trying to “blow up.” I think with the virtual age that we grew up in, and that we continue to live in, social media has pretty much always seemed like the best method of getting your music heard.

I’ve talked to a lot of musicians, new and old, who have strong opinions on the digital era of the industry that we are right in the heart of. For you, someone who has done astronomically well on TikTok and garners much of their success from streams, how big of a role do you think social media and streaming platforms have on the music scene right now? Do you think that’s bound to change, or should artists on-the-rise like yourself follow your lead by putting yourself out there in a free, public, widespread way?

I’m the first to say that TikTok has come to run the music industry. If a song goes viral on TikTok, it goes to No. 1 on the charts. I personally see it as more of a positive than a negative. Because of TikTok, I’ve gotten to work with so many amazing musicians from all around the world that I otherwise probably would never have met.

Let’s talk a bit about this sophomore single of yours, “Time Machine.” First of all, the premise? Touching and thoughtful, but whimsical, too. We love it so much. What made you want to drop this song, specifically, as a single? Is there something about it that you felt you had to monumentally mark in your growing discography?

“Time Machine” happened super quickly and super naturally. As soon as I wrote it, I thought I had written something special. So, if I’m honest, I didn’t really focus on the strategic aspect of this release. I focused more so on just creating something I loved!

You shared a post online asking fans, friends, and everyone in between to participate in your “Time Machine” music video – if they were interested, of course. Tell us a bit about how that went and what the motivation was behind it, because it seems so connecting to both the song itself and the vision behind it.

So I actually have to credit my manager for this idea! We had been talking about creating a simple lyric video with my old home footage for a while. Then one day she had the amazing idea to involve my family, friends, and supporters. This song is about a feeling that pretty much everyone in the world has felt or will feel someday, so I think it’s very fitting to get everyone involved.

What was the writing and recording process of “Time Machine” like in comparison to your debut single, this winter’s “Sirens”?

The road to the creation of “Time Machine” was wildly smooth and easy in comparison to “Sirens.” Though I love my debut song dearly, it was a very bumpy journey from writer’s block, to flaky producers, to losing all of my vocals in a computer malfunction. With “Time Machine,” everything kind of just fell into place from the lyrics to the production to the cover art and on.

There is something so natural about your songwriting skills. Did you grow up a songwriting or with indie pop star goals in mind? Where did this love of music come from and how has it shaped who you are today?

Music has always been my biggest love, but I only recently started writing my own. To be completely honest, I just felt like I had nothing to say/didn’t know how to say it. At the beginning of the pandemic, I decided to write a song everyday of quarantine. Even if I didn’t finish it or completely hated it, I still wrote a song. That’s when I was able to find my voice as a songwriter! Once I realized that not every song has to be about an epic love story or a devastating heartbreak for it to mean something, songwriting became second nature and one of my biggest passions.

It’s hard to talk about music these days without bringing up Olivia Rodrigo, who, at this point, has a least one song out in the world for each and every person to enjoy. Her own debut solo single, “driver’s license” was sort of remixed by you on TikTok as you jumped on the trend of reimagining the hit track from a different perspective. If someone did that to a song of yours – which I have a feeling they will one day – how would you feel? What would your reaction be like?

This is actually a really cool question because someone already has! In my song “Sirens” I have a line in which I sing “my brother he is so sure but i’m lost without a clue and call it life.” Back in December, before the release was announced, before the song was even finished, somebody rewrote it from my brother’s point of view. I remember exactly where I was. I was sitting in the parking lot of a Marshall’s with my best friend. I got the notification, watched the video, and proceeded to cry. It was a very full circle moment because I got my start on TikTok by rewriting other people’s songs. To see somebody rewrite something I wrote was surreal.

MIA GIOVINA’S “TIME MACHINE” IS OUT NOW ON ALL STREAMING PLATFORMS! KEEP UP WITH HER BY CONNECTING ON INhttps://www.instagram.com/miagiovina/STAGRAM AND TIKTOK!