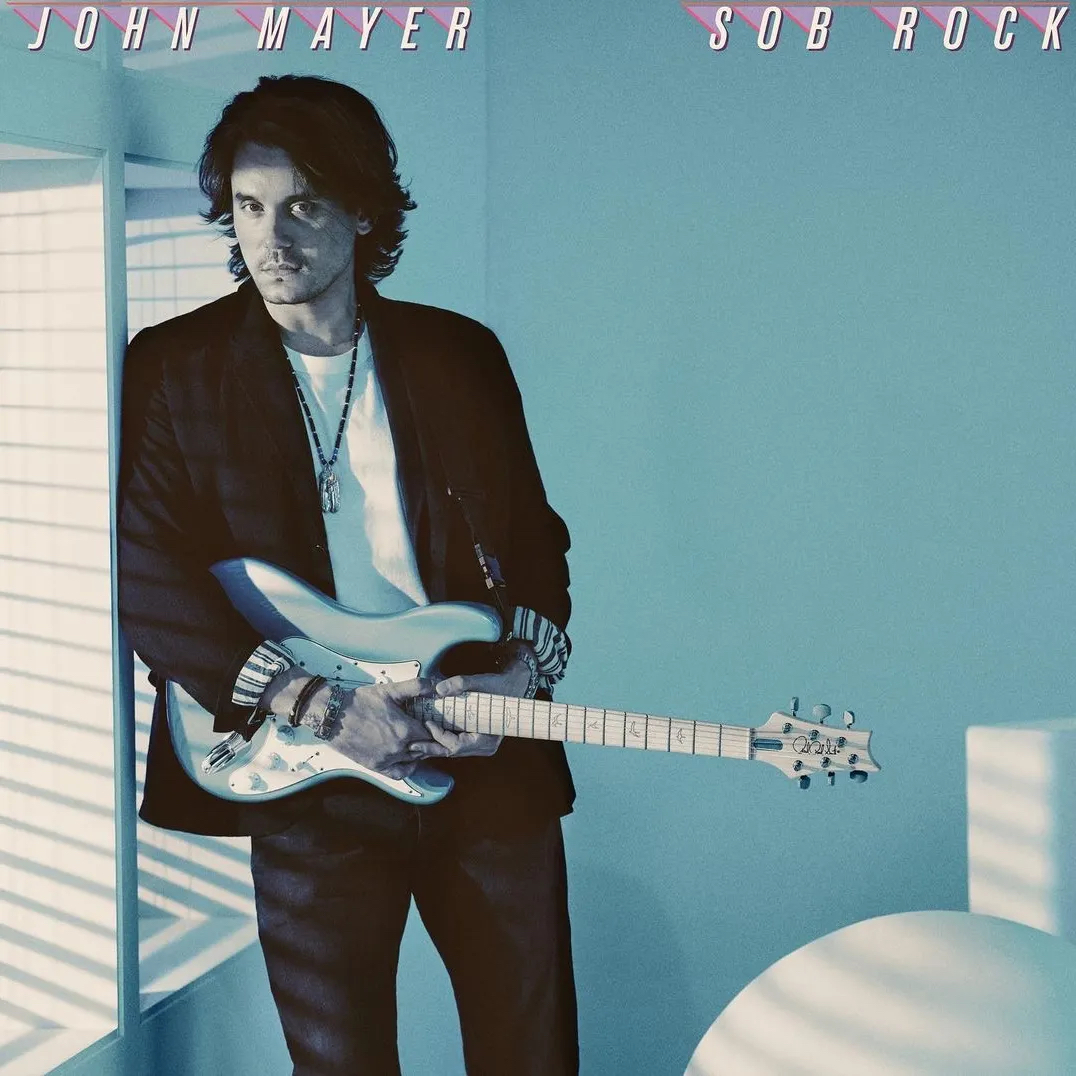 What’s catchy, melancholy, and blue all over?

It’s John Mayer’s latest record, Sob Rock, a compilation call to embrace your emotions, unclench your uptight jaw, and chill the eff out.

Sob Rock opens with an eighties riff on “Last Train Home,” the inspirational intro that sounds like it belongs on a coming-of-age movie soundtrack, or a wholesome family TV show (you can almost see Danny Tanner open the door to a room). The mish-mosh of genre sounds is capped by the backing vocals of country singer Maren Morris toward the end of the song (and a couple of others on the album). With that, the tone for this post-quarantine record is set, and Mayer takes us on a journey with his eighth studio record. It feels long overdue — not necessarily for Mayer as an artist — but for all of us music fans chomping at the bit for both new and live music. In your search of soundtrack selections to accompany your road trips to those long awaited adventures, look no further than Sob Rock.

Sob Rock is an overall easy record, a set-and-forget achievement, which feels satisfying in today’s à la carte music release culture. Mayer conceptualizes and executes a collection of songs that build on his solid foundation as a “love fool” singer/songwriter. But beyond that he boldly forges his own path as a creative director of sorts, conceptualizing a cohesive body of work that collectively prods just the right amount of fun at the human experience of love.

The recently released music video to accompany the track “Shot in the Dark” sets the tone for this whole album, as the video fully embraces a well-balanced cheesiness and nostalgia. See the old school MTV-style lower third credits, colored stained glass, and singing by a rainy window pane for all the evidence of this unlikely, clever homage.

“New Light” lends a disco vibe that supplements the homage to the archives with a laser focus on sheer seventies delight. It’s a celebratory croon for the moment as Mayer asks, “What do I do with all this/This love that’s running through my veins for you.”

It’s this kind of muted sarcasm rooted in hopeless devotion and brightly illuminated on the track “Why You No Love Me,” a brutally sappy call as Mayer croons: “Why you no love me?/ Why you no even care?/ Why you no love me? Why you no will be there?” In a recent interview Mayer told DJ Zane Lowe: “When I was making the record, the idea was that I was getting somewhere if I laughed. Not because it’s hilarious and it’s insincere and joking; it’s unexpected… the song ‘Why You No Love Me’ is funny. It’s so blatantly beautiful and sappy. The lyrics are brutal. I’ve never written more brutal lyrics in my life.”

And as is tradition on any of his releases, once again Mayer makes it challenging to decipher the superiority of his vocal and guitar masteries. He’s *that* good. Positioning this record as yet another opportunity to showcase his songwriting chops, Mayer pens lyrics that gently nudge at the human spirit and remind us to laugh at it all, as it’s coming, so that maybe we can avoid crying. Sob Rock is a comforting collection of ditties to remind us that no matter our personal traumas, we will be alright.

The bottom line is that John Mayer is charming AF and should stop giving us reasons to love him — or not — because we’ll all still be along for the ride.

JOHN MAYER’S SOB ROCK IS OUT NOW ON ALL STREAMING PLATFORMS!

The Best Live Music for an End-of-June Weekend