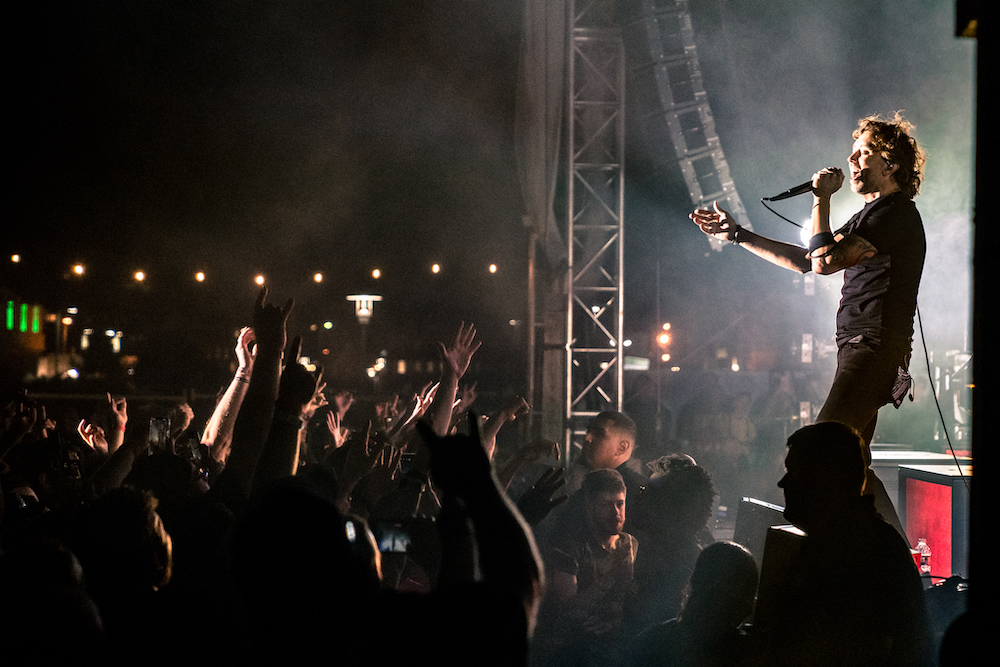 An in-depth, personalized, playful, and honest review of Rise Against’s Asbury Park return – a venue and band dear to our hearts, but not nearly as meaningful as they are to Taylor Adzima and Anthony Vito Cosentino, the respective writer and photographer of this captivating full length feature.

After nearly a year-and-a-half without in-person performances, I couldn’t wait to really live in the moment and share an embrace with live music once again. Rise Against’s return to the Stone Pony Summer Stage was set to be my first big show post-pandemic. As the date of the concert approached, my partner Anthony – who is also a show photographer for The Aquarian – went through Rise Against’s entire discography with me as we discussed the different sounds that the band produced, the socio-political content of which the band focuses, and which albums and songs were our favorites. We analyzed lyrical content, the evolution of their sound from their debut up to their latest album, and shared personal stories that helped me relate to the music. I had a great time learning about the band, their genre, and what they stand for. After my experience sifting through their studio albums, I knew that my first Rise Against show would be a memorable one.

An unsettling intro began playing over the speakers and the stage went dark with the exception of their iconic television collage amid the Stone Pony stage. Throughout the show, the band used clever imagery relevant to their songs on these TV screens. Joe Principe, the bassist, mentioned in his recent interview with us that the televisions represented a lot of different things to them, as well as to their audience, and that they had big plans for using them on the Nowhere Generation tour. I enjoyed how they effectively used the displays to drive the point home for most of their setlist, and in my experience, the displays evoked even more emotion from the listener, which is the point of live performance!

During “The Violence,” the crowd exploded with energy, as Tim [McIlrath] leaned out for everyone to scream along. The song ends and Tim takes to the mic saying, “Jersey, it’s been so long since we heard your voice!” As bassist Joe spoke about in our interview with him, Tim goes on to say that the Stone Pony holds a special place in the band’s heart. It shows great humility from the band to acknowledge sharing a stage with so many great performers is an honor to them, and how that warms their heart as much as it warms the hearts of Jersey natives.

This is a band that sounds just as magnificently live as they do in the studio. McIlrath, singer for Rise Against, put on an expressive and emotional performance. Many songs in their catalog are politically rooted, to which they gave authentic and meaningful energy while playing live. The title track of the album, “Nowhere Generation,” is a perfect example of their politically charged lyrics and sum up what they stand for: “We are a credible threat to the rules you set / A cause to be alarmed / We are not the names that we’ve been given.” In lyrical content, this song was reminiscent of My Chemical Romance’s “Teenagers,” as they both tout similar messages – the younger generation are a force to be reckoned with and they will fight back when push comes to shove.

Tim’s acoustic performances of “Forfeit,” Rise Against’s newest acoustic song, and their hit “Swing Life Away,” their first acoustic song, were a gorgeous pairing of two very passionate pieces. In the chorus of “Forfeit,” Tim sings, “I will not give up on you / Come fire and flood / Let the earth shake / I won’t move” and this blends beautifully with the chorus in “Swing Life Away”: “If love is a labor I’ll slave till the end / I won’t cross these streets until you hold my hand.” It’s almost as if they were meant to be a medley, the lyrics of the former seamlessly flowing into the latter.

Anthony, my partner and the photographer here, deserves the credit for teaching me about the band from the day we met. On our first date, he sang “Swing Life Away” because he felt that the lyrics would resonate with me, so seeing this performance with him as he sang along in my ear next to me nearly brought me to tears. As a 15-year veteran fan of the band, Anthony can explain it best: “Rise Against has been so important to me from adolescence into adulthood, so after so long without live music, this night could not have been more special. Not only getting the opportunity to photograph the band, but to do that while Taylor simultaneously reviews the show, just felt like the universe coming together in a beautiful way for us.”

Prior to my introduction to the band, I was under the impression that they might be too heavy for my taste. I was completely wrong, so this is why you never judge a book by its cover. Rise Against’s ability to balance melody with aggression was incomparable to just about any live show I’ve seen before. The equalized balance in sound production throughout the show made it easy to pick apart the songs, which is exactly what I want to do when I see a band for the first time. The collection of songs they chose for the setlist were all beginner friendly choices, as they showcased their hits as well as stand out songs from their new record, while also including deep cuts for the die-hards to enjoy. Considering that The Pony was one of their first few destinations on this tour, the rest of their fans around the world, new and old, are in for a hell of a show.