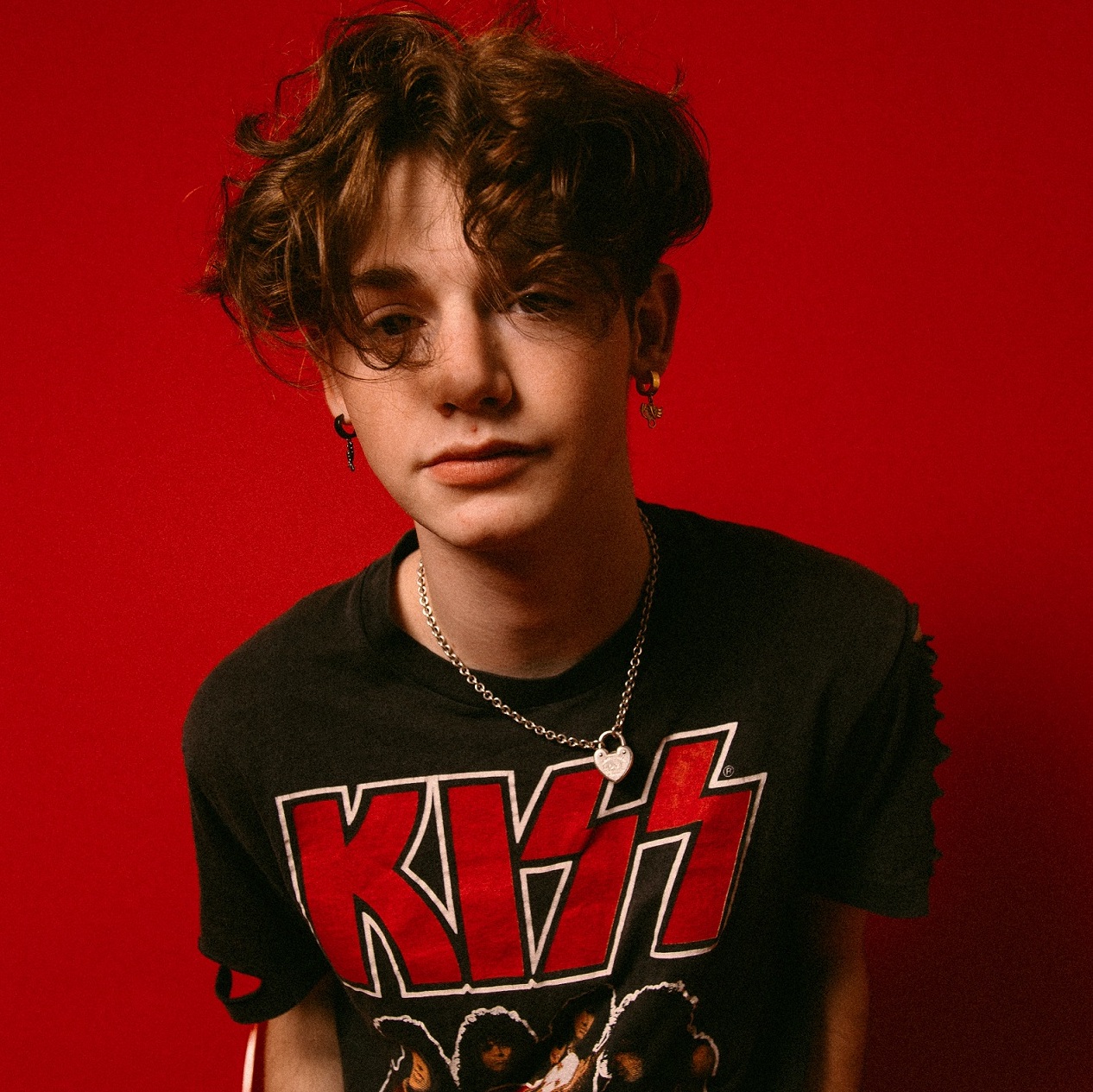 Inspired by the hyper-pop icons of today, memorable musical production, and Post Malone, rising rockstar Payton Moormeier is an impressive character who is making waves as we speak. He is a genre-defying, TikTok-creating, heartbreak artist whose similarities to the iconic Ferris Bueller and the edgy, but melodic stylings of 5 Seconds of Summer have helped put him on the map.

We never claimed to know math or be good with numbers, but there are a few that we know that are impossible for us not to share. For example, Payton Moormeier has 4.6 million followers on Instagram and 10 million more than that on TikTok. (Yes, that is almost 15 million – we gasped, too.) There are only eight songs to his name, but over 180,000 monthly listeners on Spotify alone. Did we mention he is only 18-years-old? And has been for less than 10 days?

Moormeier is one of the latest stars to come up on social media and effortlessly cross into the music industry thanks to whimsical guitar licks, a pop punk edge, and lyrics far too wise for someone who shouldn’t have even graduated high school yet. Yet, the star, known simply as “payton,” has all of that and more under his belt. Fans of all ages are eating it up, too, because who doesn’t love an urban infused rock song reminiscing on lost relationships or reminding you of long car rides with your crush? It’s youthful and invigorating with an edge that only today’s young stars can get away with having.

They say age is just a number, but modernly, your age can play a role in everything from how you greet your friends to what emojis you use. Moormeier explains to us in a lively and exclusive conversation that there are benefits to being young – especially right now. “I definitely think that being younger kind of helps understand more of the social media world and everything going on with that.”

Even though up until recently booking gigs, signing contracts, and embarking on tours was a bit difficult, the ability to not just navigate social media, but do so successfully has given him a leg up as an up-and-coming, but already beloved musician. There are few expectations of him, regardless of his age, fame, or industry caliber, that he can’t crush – or hasn’t crushed. “It’s great,” he tells us. “I’ve been on social media since like 2015, so I am no stranger to that whole world of everything being posted and shared.” This is notable and true, as Moormeier has amassed over third quarters of a billion (!) likes on Tiktok thanks to his clever videos that feature singing, dancing, comedy, friends, messy bun tutorials, and that kind of LA-by-way-of-Georgia youthful abandonment many of us still dream of.

Fans often stop the star to take selfies and say a cheerful hello, but many also ask him to be in TikTok videos with them, and whether it be a lip-synced clip or a dance trend, he’s always up for it. Payton Moormeier is thankful for his place in the world and, as a social media aficionado on the side, admits that he loves that side of fame: sharing moments online and connecting with fans. “I love it. I’ll keep doing it,” he says, a smile clearly lingering in his voice.

Social media has become so much more than sharing photos and videos online, though. Streaming services and platforms of the like have taken on a life of their own with how they track, curate, and shape the narrative of modern day music listening. Moormeier appreciates that, though, because he himself listens to the “Hit New Music” playlist on Spotify and has found some pretty stellar artists and friends that way. With his latest single, “Drive Away,” the playlist meant even more to him because it got added to it’s tracklist and stream rotation. “That was definitely a surprise,” the TikToker-turned-rockstar explains. “‘Drive Away’ actually got added to that right when it dropped, which was really cool.”

“Drive Away” is an entire coming-of-age movie performed in under three minutes, yet we can guarantee you’ll wish it goes on longer. It’s an expertly mixed and mastered song that shines thanks to it’s Warped Tour-tinged musicality and overarching cohesiveness. It’s so easy to love as a single release from Payton Moormeier, but the icing on the cake is how fast the singer whipped it up and the depth he helped bring to the accompanying music video.

While thinking back on the creation of this hit alternative song, which was done just a handful of days after he made his other hit, “Nevermind,” Moormeier explains that – if he remembers correctly, “The beat was already made by someone else.” Not all of it, though, and it still needed those iconic and thrillingly romantic lyrics. “I think it was just the guitars and maybe the drum pattern, because it’s got a super eighties feel with the style of the drums and everything. I went into the studio and loved it, but I didn’t have an idea behind it… at first. We were kind of free-styling lyrics and then the whole driveway scene popped up. That story kind of became a thing in the room and then the writing process was great. It was about an hour after I think after that then the whole song was done.”

Nick Lopez worked on the track with him, which we learned was a process that originally began back in November. “We went back to finish it in June or something like that. It definitely has been around for a while, but it’s such a great song to have out now.”

Fans and music lovers alike agree that’s great, but even more so now that it’s equally exhilarating and youthful, but not sappy, love story type of video is out. The mini movie fits the theatrics and emotion of the song perfectly, but doesn’t diminish the genuine fun found within the rocking instrumentation backing the almost nostalgic track.

“‘Drive Away’ was actually one of the first music videos that I put a huge amount of creative direction behind. I wanted to keep that nostalgic feel, so I had it done like Ferris Bueller’s Day Off. That was the immediate storyboard for what’s going on in the video.”

It was a swift process, though, and it’s clear Moormeier spends so much time working and perfecting his craft. Once again two of his most beloved projects were essentially done back-to-back. “We were actually shooting the ‘3AM’ acoustic music video one night and we had a meeting right before it to discuss it, but then literally just kind of laid out the whole idea for the ‘Drive Away’ music video, like the stealing of the car scene. We wanted to put the feelings and ideas from the movie Ferris Bueller’s Day Off in it to make the story kind of come together – without pulling the whole entire movie, you know? It’s clear it was definitely inspired by that movie, though, for sure.”

After being cooped up for so long due to the pandemic, who wouldn’t want to at least pretend to steal a car or act out their John Hughes movie dreams? Hitting the road, though, that’s a feeling and experience unlike any other than Payton Moormeier was thrilled to embark on having not been able to do so since March 2020. This summer he was able to visit new places once again on the Boys of Summer Tour, feel the heartwarming sensation that comes from watching his adoring fans sing back to him, and immerse himself in the undeniable and unbeatable energy that fills every crack and crevice of a concert setting. He loves all of it without a shadow of a doubt, but the musician’s very favorite part about those moments? “How [fans] react to my songs in person and having those couple of fans who just sing the lyrics back to even new songs and then being able to hear them do that. Throughout the whole pandemic, obviously I got feedback online from fans, but those who have stayed with me that whole time and have now come out in person so that I can see them jumping around and just having a great time while I am performing…. Right now that is probably the best thing, for sure.”

Another level of emotion can hit Moormeier, too, while on stage. It’s heavier than the charm of seeing young girls enraptured with your youthful stage presence, though. While much of the personable performer’s reality is highlighted and hinted at within his lyrics, a handful of the rising star’s work is soul-stirring in that whirlwind, high school-aged end-of-the-world sort of way. “With a song like ‘Hard to Breathe,’ I have very vivid memories of being in the studio and then writing the songs and stuff like that, especially, though, with tough ones like ‘Hard to Breathe.’”

There’s an emotion in the song’s narrative, as well as the uptempo, bouncy, trappy background beats that elevate the angst. “I knew I could treat you better. I made mistakes. I should have never let you go and now I’m all alone,” he sings, resonating with more than just his fans, but anyone with a relationship still simmering quietly in the depths of their heart. The Georgia native already has a knack for cracking open his soul for the most breathless storytelling, but does so in a way that is fun and illuminates the thrill of being a young, viable performer with a hand on the pulse of the music industry… and a down-for-a-good-time mindset in his back pocket.

THE BOYS OF SUMMER TOUR IS BEING RESCHEDULED. KEEP UP TO DATE ON IT’S NEW DATES BY CLICKING HERE. FOLLOW PAYTON ON INSTAGRAM FOR UPDATES ON HIS VERY OWN, HIGHLY ANTICIPATED MUSIC MOVES!