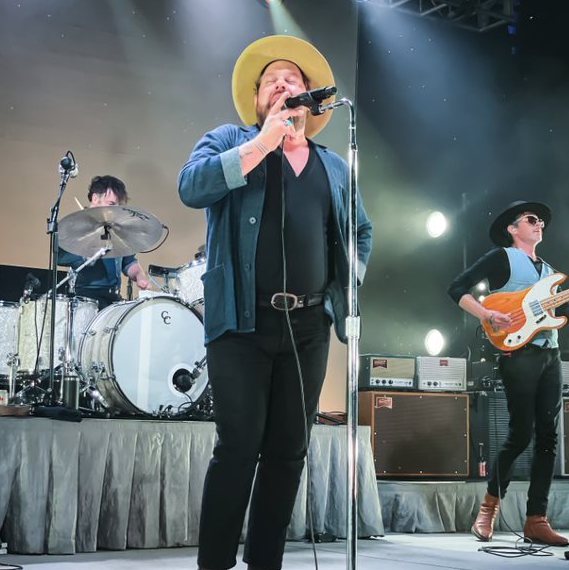 Since their 2015 debut, Nathaniel Rateliff & The Night Sweats have morphed into one of the country’s hottest touring attractions. Nothing is off-limits for this exquisite singer-songwriter-performer, including his painful divorce after 11 married years (“What A Drag”).  Now add the alcohol addiction of his longtime best-friend/producer Richard Swift who passed away in June of 2018 (“And It’s Still Alright”), his own consumption problems, and a hard life having to deal with the death of his father at 13 and his mother taking off to remarry and not looking back when he was 17…. The dude pours his heart and soul into every one of his songs.

Influenced as much by Harry Nilsson as Astral Weeks-era Van Morrison, you would think his music would stay within the confines of sensitivity. You’d be wrong. On July 27, his 20-song live set at Levitt Pavilion in Bethlehem, Pennsylvania – complete with a backdrop of the rusted steel stacks of the old Bethlehem Steel, now lit up like an art-deco sculpture – was a rousing example of soul, funk, Americana, and good old rock ‘n roll. His band burns and seethes with total abandonment and a ferocity of spirit that, indeed, causes night sweats. I couldn’t help but think of a song from 1963 that galvanized my 12-year old soul:  “You Can’t Sit Down” by The Dovells. I drove my mom and grandparents crazy playing that song over and over again on my cheap little Sears record player. Now, 58 years later, I again couldn’t sit down as Rateliff poured his problems into his energizing set.

Rateliff was in fine spirits as this was one of the first shows he and his tight band were able to perform after a forced elongated pandemic-assisted absence from the stage. He was ready to rock and did so in grand style, especially during the energetic “Howling At Nothing.” Then there was “I Need Never Get Old – may he never not play this longtime staple of his set! The entire crowd seemed to know every word. After a particularly thrilling “S.O.B,” we walked out to the strains of his “Love Don’t” finale, yes, drenched in sweat, and all the happier for it.

The big surprise of the evening, though, was the emergence of a total bad-ass by the name of Marcus King from South Carolina.  How’d I ever miss this guy? Suffice it to say, he blew the audience away. He’s the real deal with a voice for the ages more like a 60-something Black guy than a 25-year old white guy. He positively blistered his lead guitar as he performed songs from his El Dorado debut (produced by Dan Auerbach of The Black Keys) and a well-chosen bevy of blues-rock covers. Relying heavily on the blues, his idiosyncratic brand of southern rock eschews the obvious influences for a more direct link that hearkens back to previous generations.

There’s some great Levitt Pavilion upcoming shows, the most enticing of which has to be next month, on Sunday, September 12, when “The Graceland Experience featuring Bakithi Kumalo” will rock this outdoor venue with the sounds of Paul Simon’s 1986 Graceland album. Kumalo popped that fretless bass all over that album, giving it its distinctive sound. Just listen to “You Can Call Me Al” for a taste of this powerful South African bassist/composer/vocalist’s jagged bass lines. He doesn’t just secure the bottom, he uses the bass almost as a lead instrument like Larry Graham in Sly & The Family Stone, Flea in Red Hot Chili Peppers, and Les Claypool in Primus. Plus, on September 18, direct from New Orleans, will be Tank and the Bangas, a quintet of ferociously soulful proportions. From hip-hop to funk grooves, from jazz to R’n’B, Tank should steamroll the crowd into submission.

I’ll be there. Come dance with me.