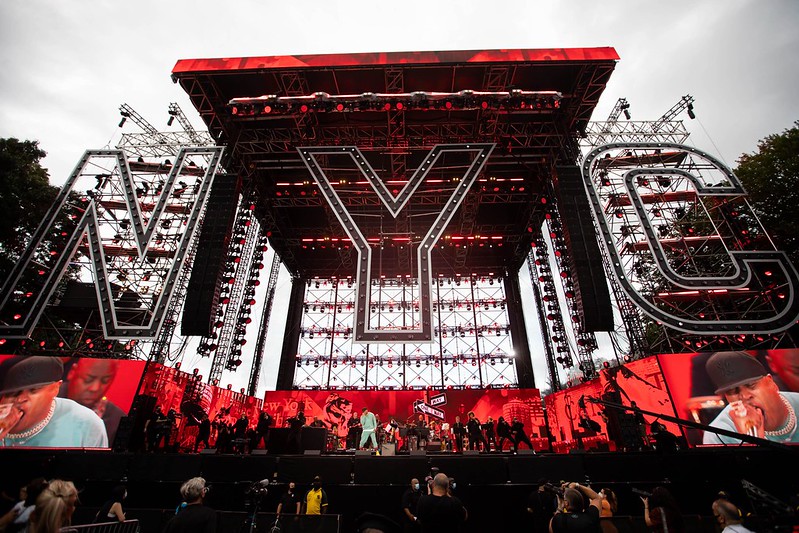 Moments before the We Love NYC: A Homecoming Concert began at 5:00 p.m. on August 21, the sun broke through overcast skies and baked thousands of vaccinated New Yorkers in Central Park’s Great Lawn. Two-and-a-half hours later, the park was evacuated when lightning brought by Hurricane Henri was seen nearby. Those who lingered in the park hoping the concert would resume quickly were drenched and disappointed.

Barry Manilow was halfway through his set when an announcer advised all attendees to seek shelter. Manilow, who had performed “Mandy” and “Copacabana,” was singing his 1978 hit “Can’t Smile Without You” and seemed to be unaware of the announcement. He continued singing, although he could be barely heard over the repeating announcement. Ironically, Manilow did not perform “I Made It Through the Rain.”

Most attendees received free tickets via an online lottery. The VIP packages cost up to $5,000, however. Refunds have not yet been announced.

De Blasio had announced the Central Park concert on June 7 as a sign that New York was recovering from the hardships of the COVID-19 pandemic. At that time, coronavirus case numbers had plunged and vaccination figures were escalating. Since then, however, the highly contagious Delta variant has become more active. On the day the concert was announced, the New York City was averaging 242 cases a day; the daily average is now more than 2,000 cases a day. Proof of COVID-19 vaccination was required to attend the concert and the non-vaccinated could watch the event on various CNN outlets.

We Love NYC: A Homecoming Concert

As the Central Park concert began at 5:00 p.m., Gayle King, a co-host of television’s CBS This Morning, welcomed the audience. In her opening comments, she thanked the essential workers for their services during the pandemic months. Echoing the triumphant spirit of the mayor’s intention, she said “We were once the epicenter of this virus, and now we’ve moved to being the epicenter of the recovery. We gather for a common purpose: to say, ‘Welcome back, New York City!'”

The concert opened with the New York Philharmonic performing the overture to Leonard Bernstein’s “Candide,” conducted by Marin Alsop. The orchestra followed with an instrumental suite of popular songs celebrating New York City, including “Arthur’s Theme (Best That You Can Do),” “New York State of Mind,” and “Theme from New York, New York.” Richie Cannata, who played saxophone in Billy Joel’s band for decades, joined the orchestra and played the iconic sax lines in “New York State of Mind.”

Carlos Santana was joined by Wyclef Jean, Prodigy, and Rob Thomas, Julia Michaels and JP Saxe sang a duet, and Kane Brown and Journey performed two songs. The hip-hop artists then performed a medley of hits. Jon Batiste performed, Earth Wind & Fire teamed with Babyface and Lucky Daye, and Polo G performed one song. Two-and-a-half hours into a five-hour show, Barry Manilow was forced to stop midway through his set.

The weather predictions were that Hurricane Henri, a Category 1 storm, would reach New York on Sunday and primarily in eastern Long Island. Concert attendees felt initial raindrops about 7:30 p.m. At that time, an off-stage announcer suggested that those who carried ponchos might want to have them ready for use. A few minutes later, the announcer interrupted Manilow’s set, advising the audience that “Due to approaching severe weather, all persons should move quickly and calmly to the nearest exit and proceed to your vehicles and protected areas outside of the festival site.”

As the audience was leaving, de Blasio came to the stage wearing a poncho. “We need everyone for a brief period of time to move to some place safe because of thunder and lightning, and then we will bring the concert back,” he said. Weather conditions grew worse, however, and the concert was officially cancelled at 10:30 p.m.