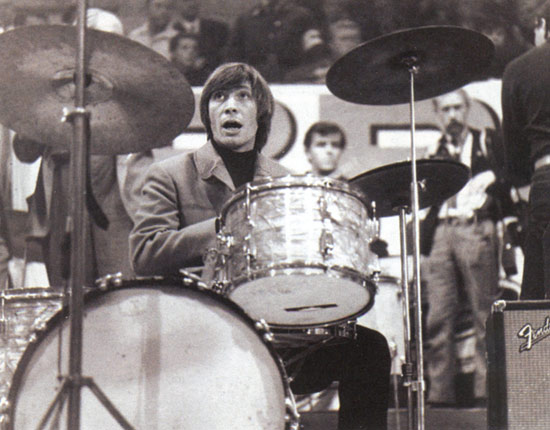 A simple man, Charlie Watts was the heartbeat of The Rolling Stones.

Literally and figuratively, the world-renowned drummer set the tone for just about everything the band embarked on. From their greatest and biggest hits (“Gimme Shelter”) to their underrated B-sides (“Silver Train”), Charlie Watts provided a kind of rhythm to the Stones that could never be replicated. As a drummer in one of the world’s biggest (and arguably greatest) rock bands of all time, Watts had the least evident rockstar qualities. Sure, he was close with the on stage tornado that was – and still is – Mick Jagger, and, yes, he had his share of substance abuse problems. At his core, though, he was merely a man who loved art, adored making music, and relished in the stillness that his private life granted him. His ear for timing and tempo and his arms-flying drumming juxtaposed that lifestyle flawlessly.

The drummer admired jazz from a young age and remained tethered to the much more intricate genre of music much of his life. Many believe it was that slick, rhythmic, almost philosophical approach to being a musician –more specifically a drummer – that helped this generation-spanning legend carve out his career. He set the standard. Among the foot-tapping Ringo Starrs of the world and the eccentricities of the Keith Moons, Charlie Watts was practically elegant. What the Englishman brought to The Rolling Stones and the rock genre was a gentlemanly air of class and skill that solidified his presence and his subsequent skills as something worth respecting.

Watts, a jazzy and bluesy drummer, was a tour de force with one hand on his expertly balanced drum kit and the other on the rockstar reigns of his headline-making bandmates. Growing up in and around the arts, specifically the classics, you hear a lot about Jagger, the Stones’ frontman, and Keith Richards, the band’s guitarist. Their talent was, and is, immense and deserves notoriety. In some ways, though, Charlie Watts outshined them. His name might not be as bell-ringing as Mick Jagger’s, but his impact on culture was just the same. The drummer was a mostly refined act from day one and his reputation, alongside his 57-year-long marriage, proved that. (On Instagram today, Joan Jett wrote that he was the most “dignified drummer in rock and roll.” We agree.)

His inspiration was the one-and-only Charlie Parker, and, like the ever distinguished saxophonist, he became an influence. The way Parker was admirable to many is the same way that Warrs is admirable to many. The influenceé became the influencer unknowingly, but deservingly… even while part of one of the aptly coined ‘dirtiest’ rock groups in history.

Charlie Watts never quite came across as a risk taker. However, his introspective look at drumming (having come off of said jazz background) let him experiment within Rolling Stones songs in an indescribable, incomparable way. He shifted gears ever so slightly whenever he needed to. Without throwing Jagger off track, Watts implemented stylings that were as delicate as they were masterful and as genre-defying as they were authentic. Even the most succinct slamming of his performances felt purposeful and new. Time and time again, the laidback and grounded musician proved to be effervescent behind the kit – yet never in a showy manner. This man was simpler than that, even eight years ago at 72-years-old.

In 2013 the veteran drummer sat down with The Guardian in a now infamous interview that shows so much of his classic personality. He admitted to the journalist that going out on an 18-show tour was “nothing” for him and the band five decades into their career, but not after relishing in his distaste for music festivals, specifically Glastonbury which the Stones were headlining that year.

“I don’t want to do it. Everyone else does. I don’t like playing outdoors, and I certainly don’t like festivals. I’ve always thought they’re nothing to do with playing. […]When you’re a band … you do anything and everything. But Glastonbury, it’s old hat really. I never liked the hippy thing to start with. It’s not what I’d like to do for a weekend, I can tell you,” Watts candidly told the British-based publication.

The foundation Charlie Watts crafted for The Rolling Stones was quintessential right out of the gate. The steady and solid artist effortlessly killed his job as a drummer and defined a generation of musicians while at it. He conveyed a swagger that was all about being timeless and far from being ‘bohemian’ (even in the sixties and seventies). Next to Jagger, Richards, Brian Jones, and Bill Wyman, Watts was the member of the Stones who was often sleek-dressed, occasionally cheeky, and always down-to-earth. He was the one whose performance characteristics were as simple but effective as his genuine persona.

There was always a humbleness to him, as well, which most likely stemmed from his life at home with his wife, daughter, horses, dogs, grandkids, collection of vinyl records, slew of antique drum kits, and well-earned privacy. How can one be a notorious ‘Rolling Stone’ and yet find peace in simplicity? By staying true to who they are and adding only what was needed – never more and never less – to the art at hand. That was what Charlie Watts, the heartbeat of The Rolling Stones, did.

A spokesperson for for the musician released a statement today that he passed away peacefully in a London hospital surrounded by his beloved family. We will miss him an otherworldly amount, but a musicians soul never dies, as their music and message lives on forever. Rest in peace.