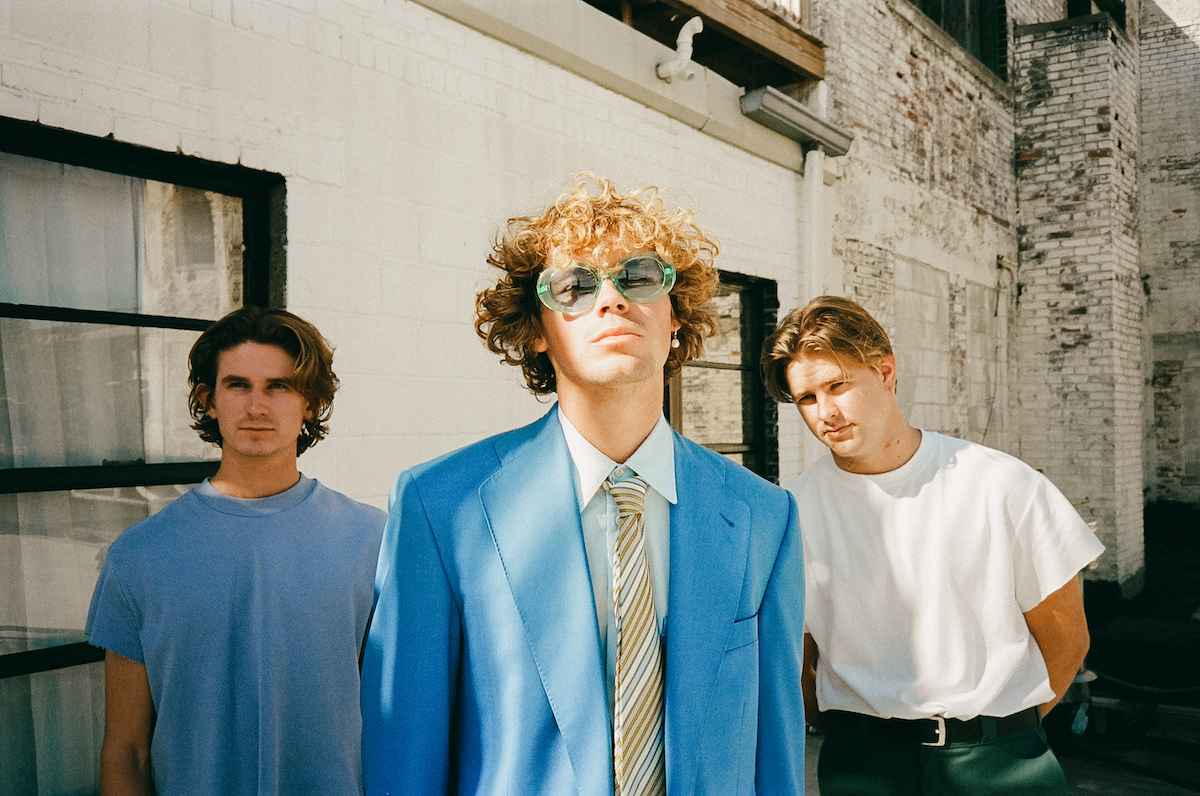 almost monday – Figuring It Out As They Go

Two weeks ago, almost monday dropped a brand new single, and even though it’s doing superbly well, the band is almost more excited about the art than said acknowledgment.

Having fun, releasing music, bring smiles to faces, and remaining friends – these are the biggest attributes of indie pop band almost monday. We could note that they are on a billboard in Times Square or the fact that they a quickly growing discography, but that’s not who they are. Dawson Daughtry, Luke Fabry, and Cole Clisby are twenty-somethings who are all about the music, but also all about the vibes.

Tame Impala, Paul McCartney, Bjork, Blink-182, and Modest Mouse are all evident influences on this trio, but it’s their funky, alternative take on mainstream pop that put them on the map. These three friends with a love of a surfing, an appreciation for the inner workings of music-making, and roots in California have shaped a unique name for themselves simply by doing something they love. Bubbly, anthemic, and reflective alternative pop is what almost monday does best and their new single from this new sophomore era is out now to prove that.

Your brand new single, “cool enough,” has already racked up tens of thousands of streams across all the major platforms. When you see things like this, amazing accomplishments and true growth in the band and your music, what do you think about? How do these milestones affect you, if at all? What’s next for almost monday having already been written up by the likes of GQ and synced on mediums such as Disney+?

It feels pretty crazy to think that all those numbers you see on a screen are real people. I think for us the focus is always going to be to try and write good music and put on a great live show. It’s sometimes easy to get caught up in the streaming numbers and stuff, but nothing is more important than the songs and the visuals to pair with it.

On the same note of being on this rollercoaster journey and having grand opportunities, you’re hitting the festival circuit…. Not just any festivals, though. Almost monday is tackling the likes of Bonnaroo and Firefly. How do you go about curating a set for an event so big and so promising? Your catalog isn’t immense just yet, but every song is a fan favorite in one way or another.

Yeah, it’s pretty funny and a little stressful because we don’t have enough songs to fill out a 45 minute set, but also cool because it gives us an opportunity to try out some new ones. [We] couldn’t be more stoked to be a part of these fests.

Something I adore about your discography and overarching almost monday brand is your artwork. It ties flawlessly into the gamut of feelings and stories told in the music itself. How do you go about that process of creating outside of the songs?

Thank you so much! We’re very involved with our covers and music videos and everything that is in the almost monday world. We usually are just collaborating with our friends on this stuff and figuring it out as we go. It’s a super fun way to be creative.

One of my very favorite lyrics of yours is “Back to the dream we once had, back to the childhood romance when you danced all night and my feet didn’t move, but the walls – they knew you’d be mine.” The imagery and the emotion on top of the indie pop lyricism and electro-rock musicality is just seamless. For verses like this and songs like this, there is an intertwining of deeper lyrics and lighter instrumentation, so to speak. What about that juxtaposition intrigues you? As it surely draws all of your listeners in.

I think we’re intrigued by trying to write music that hopefully can relate to people or make them feel something. We’re just writing lyrics that have personal meanings and trying to pair it with music that we like, so it’s cool when that speaks to people.

Similarly, the narratives at hand and battles faced within your songs are more relevant, relatable, and poignant as it may seem on the surface. What about music as a form of honest expression and influence allows you to be so vulnerable through song, even if something in a more discreet way, such as “cool enough”?

Music has always been a way to process life experiences whatever they may be. I think when you allow yourself to be vulnerable in your own music it becomes more relatable.

Almost monday is much more than a band. Yes there is music to love, but it’s also a great tale of true friends pursuing a dream. Whether it’s your onstage camaraderie or your online persona, there is a bond there that is so notable. How does your personal relationships with each other play into the way you take on music and different projects?

Love this. We’re just stoked to be friends chasing what we have always loved doing. It’s pretty important to keep that purity in an industry like this I think.

ALMOST MONDAY’S NEW SINGLE, “COOL ENOUGH,” IT OUT WHEREVER YOU LISTEN TO MUSIC! KEEP UP WITH THE BAND BY FOLLOWING THEM ON INSTAGRAM!