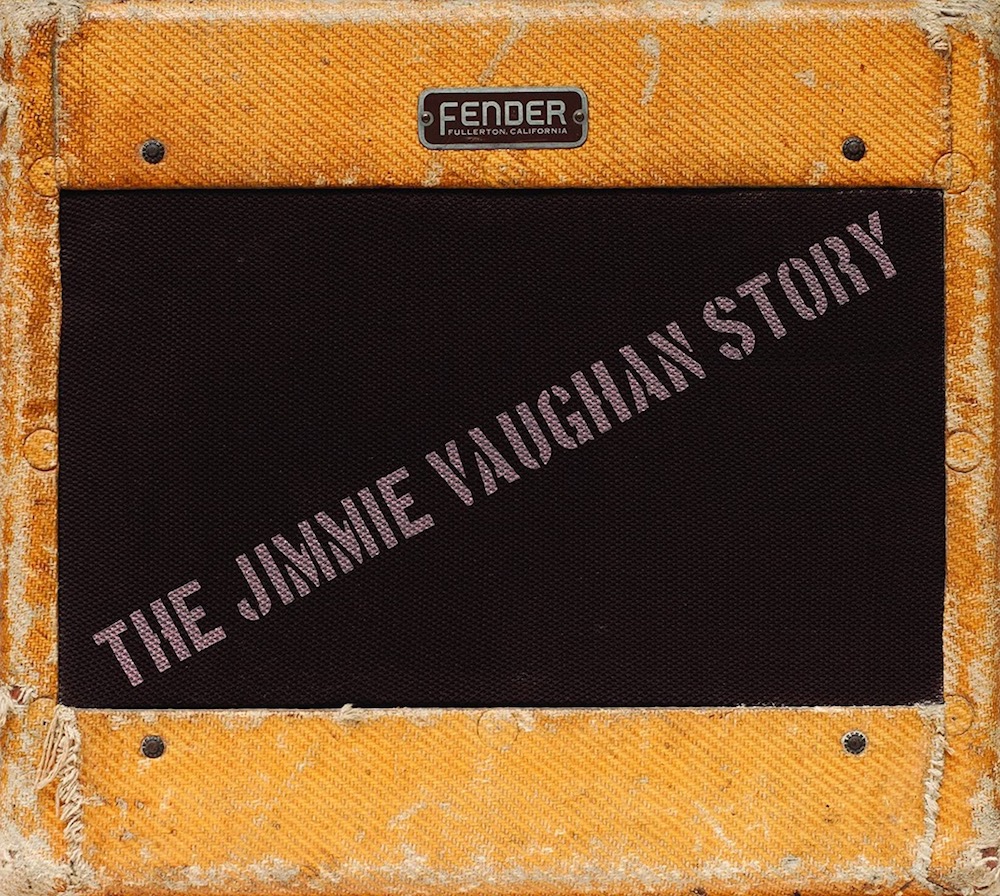 Texas-based blues-rock singer and guitarist Jimmie Vaughan marked his 70th birthday this year, and we get the present (even if we do have to pay for it): a limited-edition box set due out September 17 that includes six hours of music on five CDs plus a 240-page hardcover book. A beautifully packaged deluxe version adds more goodies, among them a vinyl copy of Vaughan’s Grammy-winning 2001 album, Do You Get the Blues, a couple of 45-rpm singles, a magazine that showcases the artist’s classic cars collection, and an individually autographed replica of the album cover.

Listening to Vaughan’s lean and wonderful guitar work in this box, you can see why so many legendary artists have wanted to work with him. As an MC says in introducing a live version of “The Pleasure’s All Mine,” where Vaughan duets with Bonnie Raitt, “he and his brother Stevie Ray are Austin legends…and they are vital links to the roots of this unique American music style.”

There’s not a bad track in the collection, whose many highlights include the Thunderbirds’ “Rainin’ in My Heart” (the Slim Harpo/Jerry West number, not the Buddy Holly song), “You Ain’t Nothin’ but Fine,” and “Why Get Up,” all of which recall 50s rock. Among other standouts are “What Am I Living For,” the 1958 Chuck Willis R&B chart-topper, which features vocals by Lou Ann Barton; Hooker’s “Boom Boom”; and a horn-spiced reading of “One Mint Julep,” the Clovers’ 1952 hit. Then there’s “Six Strings Down” and “SRV Shuffle,” which first appeared on a tribute album to Stevie and find Jimmie accompanied by Raitt as well as Eric Clapton, Robert Cray, B.B. King, Buddy Guy, Dr. John, and Art Neville.

If you’re looking for a quick and less-expensive introduction to Vaughan, you might want to opt for The Pleasure’s All Mine, a compilation of two of his best latter-day releases that came out last year. But that’s likely to just whet your appetite for more, so if your heart is with the blues and your wallet says yes, you’d probably be better off heading straight for this fantabulous big box.

Suzie Ungerleider, My Name Is Suzie Ungerleider. For two decades, Vancouver, Canada–based Suzie Ungerleider has been recording albums under the name Oh Susanna. But like John Mellencamp, who reverted to his real name from Johnny Cougar, she decided to ditch her stage moniker as her songs grew more personal. (She was also motivated to make the change after learning about the racist imagery in the original version of Stephen Foster’s “Oh Susanna.”)

Listening to this 10th solo album by Ungerleider, who sounds a bit like the late folk singer Judee Sill, you may feel as if you’re eavesdropping on her end of a personal phone call. The consistently melodic songs—all written or in one case co-written by Ungerleider, find her singing about subjects ranging from her daughter (“Summerbaby” and “Hearts”) to domestic violence (the poignant “Disappear”) to what sounds like memories of her college years in Montreal (“North Star Sneakers” and “Mount Royal”). Throughout, her literate lyrics and evocative music make a satisfying combination.

Connie Smith, The Cry of the Heart. Don’t look for anything that could conceivably be labeled alt-country on The Cry of the Heart, Connie Smith’s 54th album and first secular (mostly) record in about 10 years. On the CD, which her husband Marty Stuart produced, the famed singer never strays from the Grand Ol’ Opry–ready mainstream approach that she has applied since 1964 when she scored her first hit single. The formula’s ingredients include her powerful vocals, which have prompted comparisons to Patsy Cline, plus mournful pedal steel, addictive hooks, and lyrics about heartbreak.

Smith co-wrote three of the 11 songs on the album, including two with Stuart; the rest come from such names as Merle Haggard, Dallas Frazier, and Mel Tillis. She may not be blazing any fresh territory on highlights like “Spare Me No Truth Tonight,” “A Million and One,” and the well-orchestrated “Here Comes My Baby Back Again,” but Smith leaves no doubt that, at age 79, she can still belt ’em out.

Karen Jonas, Summer Songs. Singer/songwriter Karen Jonas opens this EP with a terrific cover of one of the greatest summer singles of the rock era: Don Henley’s “The Boys of Summer,” which the Eagles drummer and vocalist wrote with the Heartbreakers’ Mike Campbell. Jonas’s version is just about as intense and irresistible as Henley’s and, though it adds pedal steel, it’s also firmly rooted in rock and roll.

A trio of more folk-flavored Jonas originals fills out the set, which features her longtime cohort, guitarist Tim Bray, as well as a bassist and a drummer: the mellow, sweet “Summer’s Hard for Love,” the breathy, acoustic “Summer Moon,” and the atmospheric “Thunder on the Battery.” It’s an impressive package—and enough to make you hope that we’ll soon see a new full-length CD from Jonas.

Matt Jaffe, Kintsugi. San Francisco–based Matt Jaffe was just 16 when the Talking Heads’ Jerry Harrison discovered him and worked with him on his first LP. In the years since then, Jaffe has written lots of songs and recorded four more albums.

The latest of these—which with seven tracks and 27 minutes of playing time straddles the line between EP and full-length CD—makes clear what Harrison saw in the young artist: he writes well-hooked, fresh-sounding pop-rock songs but stands out most for his high voice, which recalls artists like Bert Sommer and Pavlov’s Dog’s David Surkamp. Everything on Kitsugi hits home but the melodic, lyrically deft “Voodoo Doll,” the first of the album’s single releases, is particularly memorable.

Ward Hayden and Outliers, Free Country. This Boston-based alt-country band, which was known as Girls Guns and Glory until 2018, has changed more than its moniker since it formed around 2005. Ten members have come and gone since then, though vocalist and multi-instrumentalist Ward Hayden has been on board the whole time and drummer Josh Kiggans has been with the group since 2012. Lead guitar and pedal steel player Cody Nilsen and bassist Greg Hall signed up more recently, in 2016 and 2020, respectively.

The current quartet has come up with a solid batch of passionate and well-sung original songs that wed country roots to a rock base. It’s hummable, sometimes danceable, and as eclectic as you’d expect from a band that has previously covered material popularized by artists ranging from Elvis Costello to Johnny Cash.