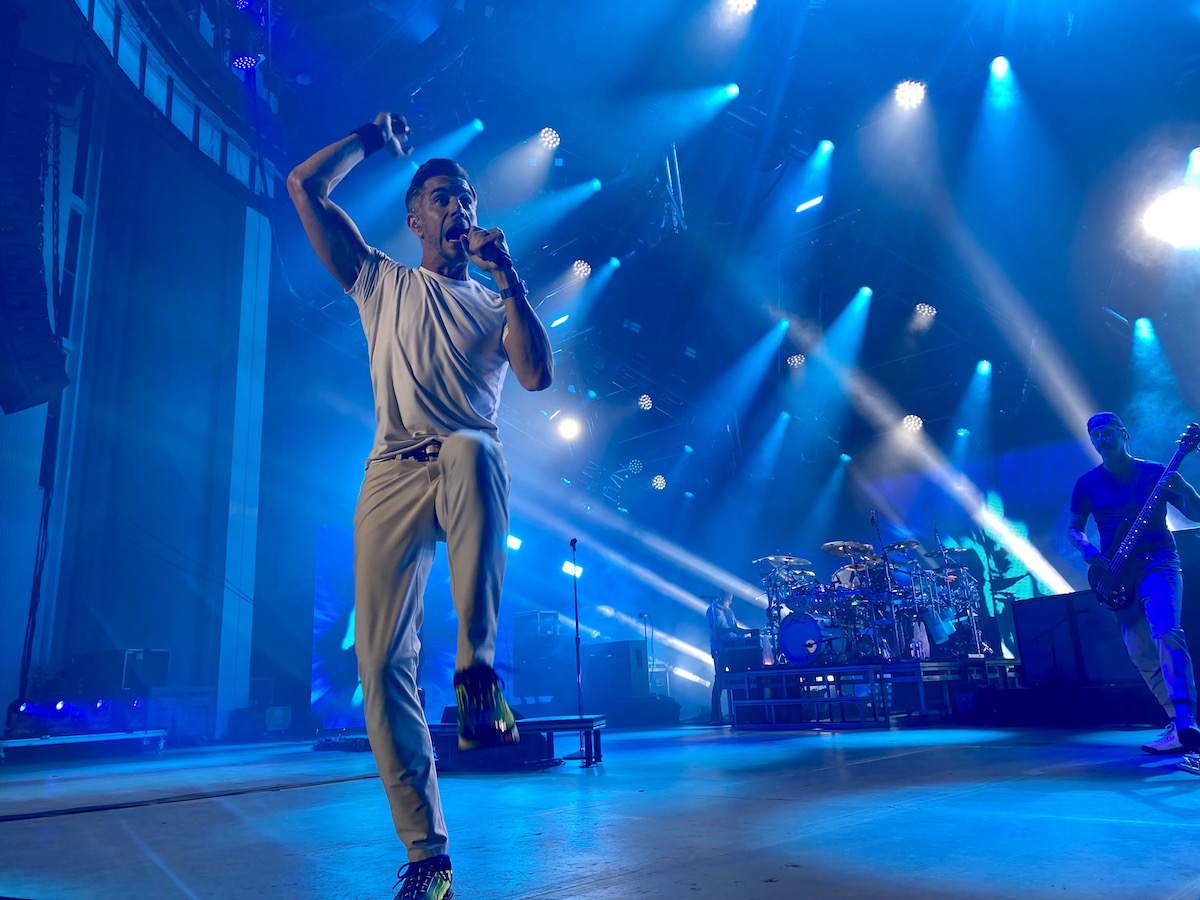 First off, let me preface this by saying that this was the first concert I’ve been to since the world turned upside down — a.k.a. fall 2019 — so it’s safe to say I didn’t know what to expect at 311’s “Live For The Ride” tour on Sunday, August 29.

En route to PNC Bank Arts Center, I had a nervous energy. I couldn’t wait to be in front of that stage watching bands pour their hearts out, paying $15 for a beer that is arguably worth $4 anywhere else and doing that inevitable — yet quintessential New Jersey — walk back to the Parkway North parking lot. But I was admittedly apprehensive: What would a concert atmosphere be like with the black cloud called the COVID-19 pandemic hanging over our heads?

Iya Terra opened up the show with lively performances of “Wiser Now” and “Ease & Grace” — fresh off their latest album, Ease & Grace, released in July — “Tried & True”, “Hold Ah Vibes” and “Love & Respect”. The Cali-based reggae quintet certainly set the tone: The good vibes were flowing. I smirked watching those who made the mistake of waiting to head in “until the opener is over” bob their head in approval as they arrived at their seats, impressed.

Next up was Iration, whose M.O. was to ensure the crowd stayed in high spirits — and they delivered. Micah Pueschel, Adam Taylor, Joe Dickens, Cayson Peterson and Micah Brown performed “Already Gold”, “Wait & See”, “Reelin’”, “Guava Lane”, “Turn Around”, “Coastin’”, “Time Bomb”, “Energy”, “Summer Nights”, covers of “Come & Get Your Love” and “7 Nation Army” that led into their final song “Back Around”. The band managed to keep the crowd captivated during what, if you’re not careful, could turn into an antsy and/or slumping mid-show crowd. More importantly, they managed to use their upbeat songs to transport the audience from Central Jersey to a tropical island.

It was now time for 311. I don’t know if it was the weed wafting through the air, watching a sea of people dance and sing along in unison after more than a year of uncertainty, or the really cute father-daughter duo in front of me rocking out to their set, but everything that happened next just felt GOOD. The strobe lights and the celestial backdrop set the ambience for what was to be an ethereal performance.

Somehow, the band infused new energy into their old hits — including “Omaha Stylee”, “All Mixed Up” and “Beautiful Disaster” — during their 18-song set. From beginning to end, there was a musical trance going on, and we were all in it.  It was obvious the Nebraska natives were just as happy to be there as we were. And it seemed as though they were grateful to be with each other. A musical unit since 1988, (Tim Mahoney replaced original guitarist Jim Watson in 1990) this band has spent three decades together and are clearly in tune with each other’s ebbs and flows. That much was clear when the guys got together for a percussion ensemble later on in the night and each member threw their drumsticks into the air, trading off, before landing flawlessly in the others’ hands.

Other things that stood out to me besides the obvious indescribable feeling you get when you’re enjoying a live concert and the songs are hitting just right: The always-engaging Nick Hexum took a moment to thank healthcare workers, teachers and more — and also incorporated a sweet birthday shoutout for his daughter Echo with the audience.

At 51 years old, Doug S.A. Martinez had more vigor than anyone I’ve ever seen. The vocalist moved around that stage giving everything he had to the audience (his shirt was soaked in hard-earned sweat) and we felt it. Aaron “P-Nut” Wills — who killed it on bass — turned up the charm for an adoring crowd, who chanted his name more than once. Tim Mahoney seemed completely plugged into his guitar, as if he and his instrument had a language only they could speak, and it was up to them to convey their message to the masses. Chad Sexton’s incredible drum solo had me turning to the people behind me and saying, “Did you see that? That was MAGIC.” (It really was that good.)

Final conclusion: I’m sure any concert that marked my reintroduction to live music would be special, but this show just hit different. All three bands understood the assignment. It was everything you hope to get out of a live show: Forgetting about real life for a few hours, and getting lost into the music. To 311, Iration and Iya Terra, thank you for what you did out there. I can’t wait to see all of you again — and sooner, rather than later. Five stars all around.