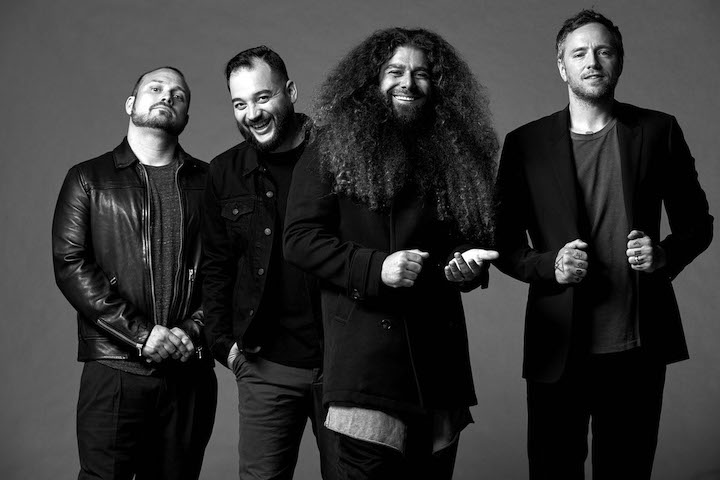 It’s hard to imagine where the progressive rock genre would be today if it wasn’t for Coheed and Cambria. The New Yorkers are vehement performers with a fan base always itching for a new sound and a new storyline. Coheed and Cambria offer it up to them often, as well. They are only one record short of having a solid 10 studio LPs to their name, but their first nine are all fan favorites in one way or another…. Not to mention the fact that they all charted in the U.S. alone, with 2015’s The Color Before the Sun even reaching No. 1 on the rock charts.

For a band immersed in what many would consider a dying genre, they are doing pretty damn well. The prog. community would be lost with C&C, so their success and style is doing so much more than simply keeping a vibe alive. Coheed and Cambria are going against the grain of what the origins of progressive rock sound like and molding it into this pop, emo, metal mashup of sounds that fill avoid and fit a concept.

We’re honored to know this meticulous, driven band. Having followed their career since the early 2000s, The Aquarian has seen Coheed’s evolution firsthand, experiencing it through lively concerts and sprightly interviews. Ahead of their New Jersey tour date at PNC Bank Arts Center on September 19, we decided to remind ourselves just how deep our history goes with a band so dedicated their artistic craft.

Our review of Coheed and Cambria’s show at Hammerstein Ballroom alongside Avenged Sevenfold:

“Coheed And Cambria, in contrast, came prepared with a diverse and robust setlist. From hit singles like ‘Blood Red Summer,’ ‘A House Favor Atlantic,’ and ‘The Suffering’ to more dynamic and lengthy selections like ‘In Keeping Secrets,’ Coheed drove forth at speeds far greater than a 10-speed bicycle could ever wish.

“The producer we were working with, Nick Raskulinecz, had worked with the Foos before and were good friends, so he suggested Taylor. I had never met Taylor, but he’s super cool and obviously a solid drummer, so we said, ‘Fuck it, let’s try it.’ He did a phenomenal job. All the fills are his and the drum parts are definitely Chris’. He got all the parts by listening to Chris’ demos. He also had an awesome personality. We lucked out.”

Claudio Sanchez relishes in Coheed’s (ever-growing) accomplishments and his personal feelings on such:

“I’m not ashamed of it: I listen to Coheed records. I do, because it’s what I do and I always want to grow and so I think the only way to really grow is to go back and see what you’ve already accomplished and what you can make better in terms of if you want to think of it in sort of a strategic kind of way. It’s like, ‘What haven’t I done? What do I really want to explore? What haven’t I explored?’ Those kinds of questions. And I listen to them and I do I really think there’s a strong progression, and I don’t mean it in a genre sense, but I mean in terms of the band’s growth.”

Sanchez shares his love of his home state, home city, and hometown performances:

“I got to tell you man, it’s New York. I know I’m from New York but – I don’t know – it is home. For me, I grew up outside Manhattan about 30-40 minutes up the Hudson River but you can see the city from a high point. And it is home certainly outside of Manhattan but growing up it always felt like the magic kingdom was like, 45 minutes away or something. You can see it, it’s an amazing place and I was right in its backyard, and when I go there, it’s kind of the best of both worlds.”

Travis Stever dives into the correlations between Claudio Sanchez’s The Amory Wars series and Coheed’s double album, The Afterman: Ascension:

“I think that’s ultimately what Coheed has strived to do – we want to make an album where everything fits together but at the same time it’s like a sonic journey through everything that influences us. Story wise for Claudio, life dictated a little bit more of the story this time around. I think it’s a little more personal for him and for me as well because I was right there going through everything. I could speak for everybody that’s now part of this unit that not a minute goes by that any one of us is not thinking in a musical sense. We’re always very creative.”

Travis Stever chats about touring for (and on) album anniversaries… not just for their own celebration, but everyone’s:

“We’re really setting up a great show to give people. We like to give our fans as much as possible. I think people will be pleasantly surprised with what they get out of this tour. […] I’m sure we’ll make our fans very excited. There’s been high demand for it. People want a reissue and we also want to revisit that time period for the band because it’s good for the soul. That time period for us was much more innocent as a band. We’re all older; we’ve been doing this for a long time, and to revisit that music and where we all were at that point is a nostalgic factor. I wouldn’t have written half the guitar parts I have on In Keeping Secrets… now, maybe it’s better to go revisit those things and get some influence or perspective, even though it’s our own stuff. It still provides inspiration.”

Claudio Sanchez explains the variety that C&C boasts and how that isn’t anything special for them, but the lack of narrative in The Color Before the Sun might be:

“Sometimes we’re unsure and uncertain of where we fit in as a band. I think that through the years we’ve always adopted some of these titles because they just made sense and maybe were thrown out there towards the band as just an idea. We’re a little unsure of what we are at times. [The new album] isn’t that big of a departure. The idea that there is no concept is the big shift for people.”

Sanchez looks back on the milestones that band has had and is grateful for even the smallest of them:

“We feel so fortunate and lucky that we still get to do this. Even the idea that we got to do the first record. Really? Somebody cared enough about the band that much to put a record out. It’s just awesome.”

Josh Eppard talks the process of getting The Color Before the Sun together:

“[…] Looking back, it was a really great time. You kind of just strip away all the bells and whistles. We just got back to four guys in a room bringing these songs to life. And naturally, in the two weeks that we did that, the songs and the parts evolved, and I think to us it becomes pretty clear what’s working and what’s not.”

Eppard admits that when a show is looking for something special, like a tour going out with a bang, the fans are the ones that set it all up:

Our review of Coheed and Cambria’s headlining show at The Theater at Madison Square Garden.

“Whether Sanchez and Stever played a soft acoustic song and jelling their vocals for light harmonies, or whether the four piece powered into wall-shaking power rock, Sanchez’s smooth singing and Stever’s innovative guitar work gave each song both shine and depth.”

COHEED AND CAMBRIA ARE COMING TO PNC BANK ARTS CENTER IN HOLMDEL, NJ ON SEPTEMBER 19. FOR TICKETS, CLICK HERE!