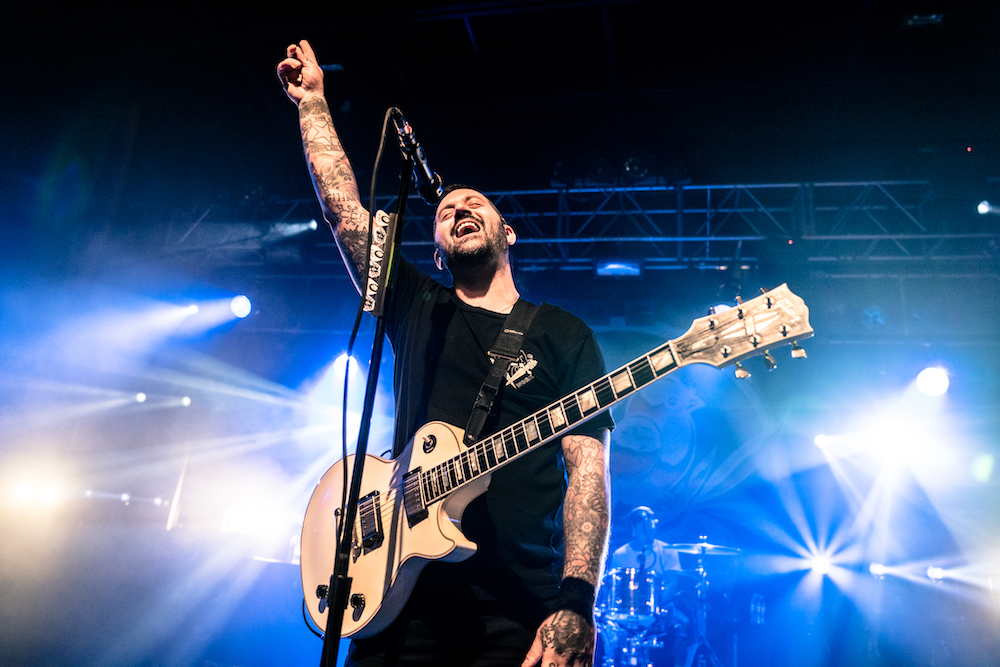 With a sold-out show filled to the brim with Jersey natives, live music, and crowd surfers, Starland Ballroom couldn’t have asked for a better reopening. The Aquarian couldn’t have been happier to have been there either, both reporting (Taylor Adzima) and photographing (Anthony Vito Cosentino) the electric night.

21 years of bad luck led up to an epic, emo-infused, high energy return of live music for New Jersey’s beloved Starland Ballroom on September 4, 2021. Bayside teamed up with Senses Fail, Hawthorne Heights, and The Bombpops on their postponed 20 Years of Bad Luck tour, rebranded appropriately as “21 Years” after the tour was rescheduled. The ensemble were the first to hit the venue and served as a sold out, grand re-opening for Starland Ballroom and its patrons. There was a flood of emotion that came with walking back into the legendary venue for the first time in over a year. Growing up, I’d seen almost every one of my favorite acts grace that stage. Everyone was overjoyed to be back – staff, security, bartenders, fans, and of course, the emo powerhouses performing that night.

Attendees funnelled in and huddled against the darkened stage. The best part about concerts at Starland is that their regulars will get hyped up for everything, the most famous being the iHop ad everyone cheers to each time it plays across the projector while sets are being prepped. The time finally came, though, and the screen ascended as The Bombpops took the stage. The Bombpops are an extremely likable female-fronted punk rock band hailing from Southern California. I was admittedly new to this band’s music, but even before they went on, I’d purchased some of their merch after bopping to a few songs on Spotify before the show. The band shredded their way through their set, and the drummer and guitarist were absolutely on point with kicks and stick flips. They lived up to their star-striking name, absolutely killing it as the opener.

Looking as 2000s emo as ever, Hawthorne Heights blazed onto the stage, opening with the 2006 hit “This Is Who We Are.” Frontman JT Woodruff, donning a red and black striped sweater, set the tone for the night, yelling “Let’s prove to our parents that emo wasn’t just a phase!” to an already pumped crowd. The entire audience sang back when they played their popular single, “Saying Sorry,” as an increasing number of crowd surfers made their way toward the stage. Hawthorne Heights adoringly engaged with their fans, professing their love for New Jersey as the crowd’s cheers grew louder. The majority of songs played that night were from their popular record If Only You Were Lonely. When the band closed with perhaps their biggest hit, “Ohio Is For Lovers,” nearly everyone in attendance sang along to the classic emo anthem.

Senses Fail, a post-hardcore group native to New Jersey, were the most animated band for the night. After playing “Choke On This” and “Double Cross,” frontman Buddy Nielsen affectionately talked to the audience about playing their first shows back since “all this shit went down.” Excited to be back in NJ, he joked with us saying, “the shittier the place, the better it is.” Many moments like this one were shared between the performers and crowd throughout the night, proving that there was a very special atmosphere about this show. Everybody was on the same wavelength for one night, exuding love, gratitude, and madness for this tour.

Buddy’s energy throughout the set couldn’t be matched – from the second he marched onstage, he was doing front kicks, swinging the mic stand around, and even doing splits midair. They closed with “Bite to Break Skin” and within the song, performed a wicked medley of System Of A Down’s “Chop Suey,” Rage Against The Machine’s “Killing In The Name Of,” and several other classic hardcore rock hits.

Skeeter Davis’ “End Of The World” played as Bayside took the stage with their logo glowing on either side of Starland Ballroom (another fantastic example of how these bands lit the ambiance for the night). Bayside is celebrating their 21-year career as a band, so their setlist stunned with at least one song off of each of their studio records. They opened with the energetic classic “Already Gone,” then seamlessly transitioned into “They’re Not Horses, They’re Unicorns.” Singer Anthony Rameri yelled out, “You know what to do!” before they played “Bury Me” off their latest record, which is possibly their heaviest song to date.

Guitarist Jack O’Shea showed off his talent in several impressive guitar solos, making his craft seem effortless. Rameri later got intimate with our Jersey audience, performing two acoustic songs, “Don’t Call Me Peanut” during the initial set, and “Winter” during their encore. They closed with their most popular song and fan favorite, “Devotion and Desire.” After 21 years of being a band, Bayside’s catalog continues to grow and evolve, yet their live shows always include something from every era of their career for fans old and new to enjoy. A night packed with emo music and nostalgia was just the medicine Jersey fans and Starland attendees needed from this long-awaited return.