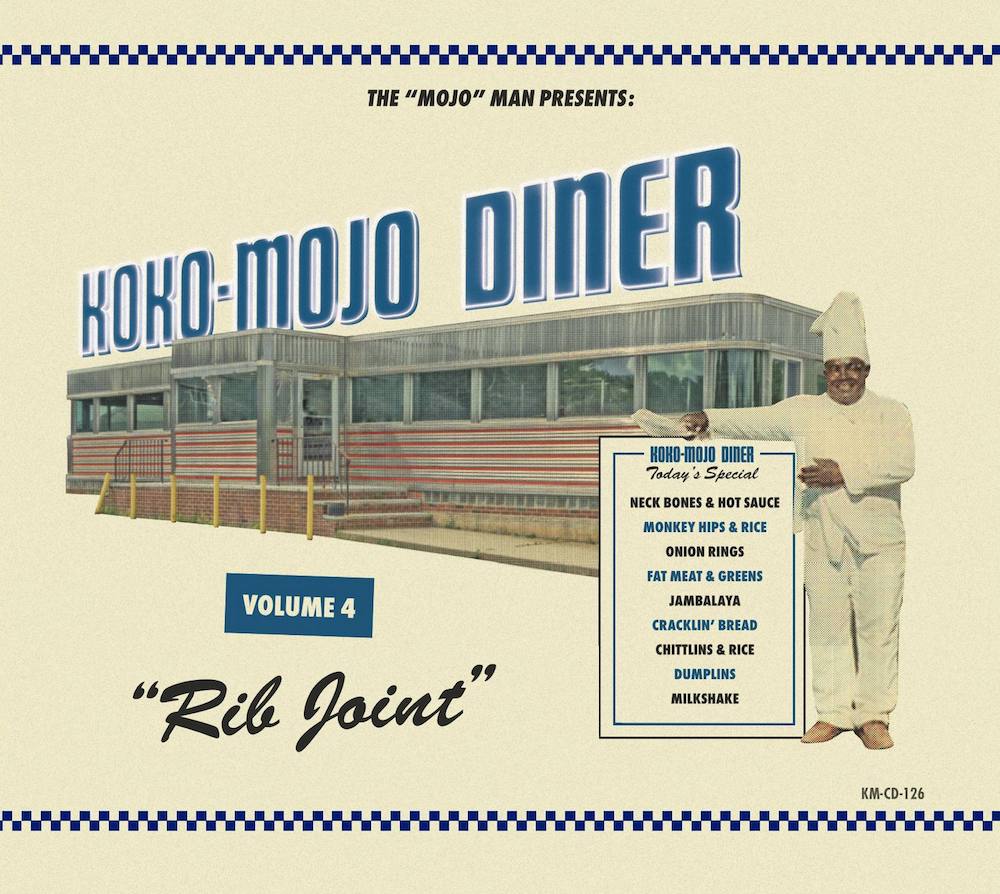 The rare pre-1963 tracks on Koko-Mojo Diner Volume #4: Rib Joint from Ireland’s Koko Mojo Records run the gamut from “You Eat Too Much” by Harold Burrage  and “Fat Meat Is Good Meat” by Savannah Churchill to “Burnt Toast And Black Coffee” by Mike Pedicin and the title track by Sam Price & His Texas Bluesicians. The more obscure the artist, the better the track.

Of course, there are those whose names are still vital to rock’n’roll history like the great Wynonie Harris who sings up a storm on “I Like My Baby’s Pudding” and the legendary jazz vibraphonist Lionel Hampton mightily swinging on “Ribs And Hot Sauce.”  Speaking of legends, Fats Waller sounds angry about “All That Meat And No Potatoes.”

These sides have been polished and remastered to today’s ear. Long lost to the dustbin of time, it’s a public service that American labels don’t seem that interested in preserving.

Colonel Sanders stole the multi-million-dollar recipe for his chicken from a Black woman, Ada Childress, who died in poverty (he gave her $1,200). A Black man, George Crum, invented the potato chip. Jack Daniels whiskey was taught to its white Southern inventor by Nathan Green, a Black man who landed on these shores with an African technique of filtering the liquor through a charcoal mellowing system, thus giving it its distinctive taste. He never got a penny despite his process leading to a billion dollar multi-generational business bonanza. Pepsi? Coke? Slaves from West Africa brought the kola nut to America with them. They chewed it for its natural caffeine. You can add watermelon, okra, yams and black-eyed peas to the list of foods brought here by slaves to America starting in the 1500s. (All of this and more is detailed in Frederick Opie’s 2008 book Hog and Hominy: Soul Food From Africa To America.) And George Washington’s slaves brought him seeds which he used to plant lush gardens of fruits and vegetables behind his Virginia estate.

Big Ed sings of his “Biscuit Baking Mama.” Ralph Marterie loves his “Shish Kabob.”  Norman Fox is partial to “Pizza Pie.” When was the last time you got down with a compilation of 28 songs on one disc with not one clinker!

Each long-ago and far-away artist has a story.

The Moroccos (“Red Hots And Chili Mac”) were destined for greatness. They came out of 1952 Chicago but disbanded when one of their members ran afoul of the mob and had to get out of town. Fast. Pee Wee Hunt (“Hunt’s Goulash”) had his own Ohio big-band in the 1940s and even enjoyed a three-million seller (“12th Street Rag”). Spot Barnett may not be remembered today but in his San Antonio day, he was an R’n’B legend. His “Sweet Meats” is one of the highlights here. He died at 83 in 2019. The dude was dapper, swinging his saxophone on the bandstand like a swivel-hipped Black Elvis. Then there’s Joe Thomas who predated rock’n’roll but as a member of Jimmie Lunceford’s swing big-band of the 1930s, would blow his sax so hard and long and crazy while he shimmied and shook that he  left the big bucks of that band behind to rock and stomp on his own. You can hear his style every time you listen to Clarence Clemons (E. Street Band), King Curtis (the main voice of early rock when the sax—not the guitar—was the genre’s main instrument) or Bobby Keys (Rolling Stones). Unfortunately, he was so ahead of his time that nobody was listening and by the 1950s, he left music completely to run a mortuary (his 1970s comeback had him still playing fast and furious.)

It is to Koko Mojo’s everlasting credit in keeping these prehistoric names alive. Consider this The Compilation Of The Year.

I’ll have another helping of Jim Jackson’s “I Heard The Voice Of A Pork Chop.”