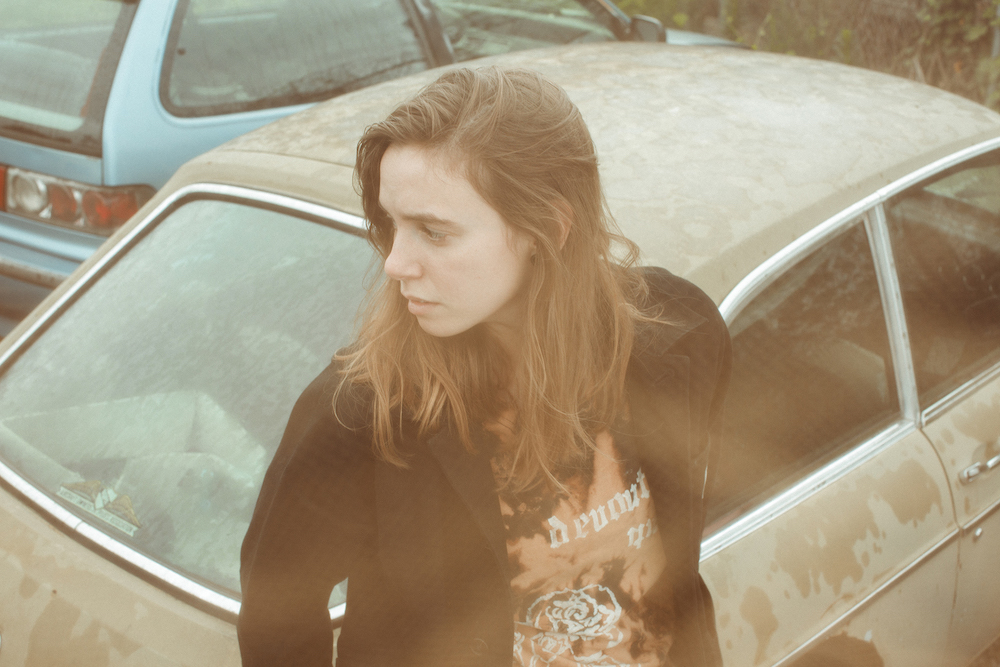 “I’ve always had a lot of anxiety around performing.”

Julien Baker is chatting with me over the phone from her home in Nashville. About to hit the road with a band supporting her new album, Little Oblivions – due to arrive at New York City’s Beacon Theatre on September 15 – she sounds incredibly relaxed. She is a delightful conversationalist; laid back, insightful. Where is the anxiety now, I wonder? When I ask her about the experience of performing, she dutifully recalls a time when she joined a friend’s gig in town and had a “full-on panic attack.” After years of what she describes as “building up a tolerance for playing live” in bands, then solo, the performance anxiety returned with a vengeance. “It’s not even like anything bad happened,” she says, laughing nervously at the memory.

While this anecdote is hard to fathom for the nearly 26-year-old Julien Baker, who has been playing music live for over a decade, it also holds considerable weight. Performance, it turns out, has been her emotional canary in a coal mine. In high school, she started a heavy punk band in her sleepy hometown of Bartlett, Tennessee – a gutsy maneuver for anyone, especially for a girl raised in the strict service of Christianity. She simultaneously battled substance abuse and bravely penned songs confronting it, and despite her surroundings, found the courage to come out at 17 to a community hardly willing to accept homosexuality on face value. All of this and much more finds its way into Baker’s wonderfully crafted songs – the angst, the confusion, the defiance, the tender vulnerability of being different and sometimes alone and sometimes misunderstood. It is no wonder her debut album, Sprained Ankle, was heralded a masterpiece. It was my favorite album of 2015, containing the heart-wrenching “Something,” which is probably the best break-up song ever with an impossibly young woman, her guitar, and a voice brimming with passion at the forefront.

Seeing all of this live is quite arresting. Maybe even for Baker, who holds nothing back – something she realizes may indeed lead to those sudden butterflies that twitter around her stomach when performing such bone-honest songs. “I think it’s easier for me to get lost in the minutia of the performance by playing the guitar, making sure the chords are correct,” she reasons. “I love playing guitar. I love playing piano. When playing an instrument, for me, the notes are either correct or they’re not. But when I’m singing and I’m divulging lyrics to a crowd, it’s hard for me to get lost in the songs or ignore the craft of my playing, because if I let myself go into what the song is about, it makes me more anxious… it makes me feel naked, and really vulnerable.”

Full disclosure: I love Julien Baker. Her voice, which I told her (and received quite a shocked and humble response) reminds me of the legendary Billie Holiday’s fierce sadness. The sounds she emits from her electric guitar rig, a willing siren. So that last statement, for a music writer and a fan, is a rare gem. Who wants an artist up there with nothing on the table? Baker has skin in this game and she knows it.

Little Oblivions covers much of the same material that has inspired her music in the past. “What if it’s all black, baby – all the time?” she sings in its opening track, “Hardline.” And why not? “Since I had been playing in hardcore bands, this was the rubric: Music, it’s how you get your feelings out,” she says. “But the more I practiced songwriting, because it is a discipline and not some innate skill that I was struck with a lightning bolt, the more I find that I need it.”

And that discipline is somewhat ephemeral. “I don’t always write in the same way,” she says. “I don’t have a writing ritual. I write down ideas and slowly distill them into a song.”

An excellent example of these distilled ideas and musical choices is found on the album’s tender piano ballad, “Song in E” – one sample of her Billie Holiday tiptoed-edge phrasing – wherein she sings in its refrain, “It’s the mercy I can’t take” as if hanging by the thinnest of reeds. It is a thing of brutal beauty.

Baker’s initial self-review of her new record is that the songs sound “piecemealed,” but only because she composed them as she lived them, a wandering spirit. “I probably wrote these songs in four or five different places,” she explains. “The environment or the circumstance really informs the music that I make. For instance, I had my guitar and my rig with me in college and I would write riffs, and that was Sprained Ankle, but when I was living back in Memphis, I would write songs on my home piano, so when I made Turn Out the Lights those songs tended to be more dirgy piano ballads. When I moved back to Nashville, it was way too much money to move the piano, because its ridiculously expensive, so I’ve been writing a lot for guitar.”

Nevertheless, there is one thread to Little Oblivions, a key element in Baker’s oeuvre: storytelling. “Storytelling is innate to humans,” she notes. “That’s why you tell the same story about the fight you had with your ex that was really traumatic or the falling out you had with your best friend to your other friends. You tell those stories all the time because they’re important and they’re difficult and the more you tell them the more information you can glean – the more time that you hear yourself say something maybe the more insight you have into it.”

In the storytelling, she insists, there is catharsis. “If I sit down to write a song and I’m angry with myself or I’m disappointed or I feel helpless or I feel like I failed, the more that I write the more nuance that feeling becomes. It’s less daunting because it’s this safe space to explore all the facets of that feeling.”

Feeling. Storytelling. Anxiousness. Attention to musical detail. Baker can express these and more in a four-minute song or a passing chat, but the one thing that fuels this is self-awareness; another rare trait in youth. Even when considering her fragile sobriety, she sings with a pained lilt in an odd homage to her demons, “Faith Healer:” “I miss the high, how it dulled the terror and the beauty / Now I see everything in startling intensity.”

Often times, none of us ever gets to such reflective honesty, as Baker frames with some humor. “Of course, I say all this about storytelling teaching us things, but I don’t know, maybe that depends on how emotionally intelligent you are. There’s plenty of people that talk about stuff until they’re blue in the face and never realize that they have a really skewed perception of it, or maybe that they were wrong, or that maybe both people were wrong, myself included. I’ve been that person, but hopefully songwriting can be like having an extended conversation with yourself.”

Another conversation that leads to song. “Ultimately, I make music, because I make music,” she says. I can just about hear the grin on the other end of the line. “It’s very infrequently that I will have the audience in mind.”

Which brings us back to the “anxiety of performing” stemming from the “naked vulnerability.” Perhaps this is why Little Oblivions is her most “produced” and “arranged” record to date. I put those terms in quotes because she told me this. She may have been inspired by her work with her super-group boy genius (with Phoebe Bridgers and Lucy Dacus) to expand her sound. She may have needed to feel less incumbent on her solo jaunts. But either way, it was time.

“I was working with a more limited palette before, but I understand now how production can serve a song,” she says. “And I think there’s a lot more playing with the vocal production in this, because there are other pieces happening – there’s guitar parts, and drum parts, and piano, and random synthesizers and stuff. So, the song isn’t reliant upon the vocal as the anchor.”

Baker took time to experiment and play all the instruments on Little Oblivions, slowly building out tracks, adding to the sonic landscape, constructing what I hear as a collection of short stories; less “piecemeal” than one of those endless course dinners you get in Little Italy. “I don’t know if I would do it again,” she muses. “I’m not a virtuoso with these instruments. I’m okay on guitar, I’m okay at piano, and I can barely play the drums, but the fun part is I didn’t necessarily want a pristine drum sound. I wanted to write parts that sounded un-drummerly, and if we have to suture them together in recording… that’s fine.”

Despite, or because, of this kind of self-contained experimenting, Baker found the entire experience fun, challenging, and ultimately “really fulfilling,” providing her with a sense of “control over all the moving parts.” And now with a touring band she, and all of us, can see and hear it come to fruition – a tour that will distill those ideas further. “Playing with a band shifts the dynamic of the live set,” she says with some relief. “It makes me want to loosen my grip and trust other people to play on the records.”

And maybe relieve some of that anxiety?

“I don’t know,” Baker mulls. “Maybe in the future, it’ll evolve even more.”

FOR TICKETS TO SEE JULIEN BAKER AT THE BEACON THEATRE AS PART OF HER NORTH AMERICA & EUROPE TOUR, CLICK HERE!