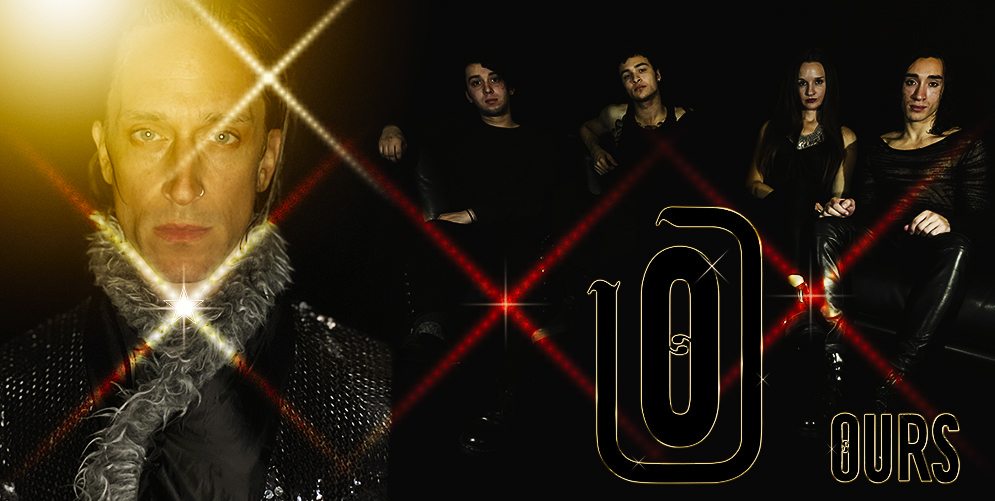 OURS – Creating The Epitome of Spirited Art

With a self-titled album out, celebrated industry professionals in their corner, and more confidence in themselves and their music than ever, OURS are more than ready to take their latest tour to the Garden State – and close it all out at the beloved Debonair Music Hall.

Timeless without reverting back to the classics, OURS is so much more than a rock band. The captivating, deceptively humble quintet astonishes all listeners and concert goers with raging, searing anthems that ruminate on raw feelings without ever missing a literal, or figurative, beat. OURS’ songs are fun, explosive, and easy to dance to…. Actually, they’re practically made for getting you off your feet, really. Every piece of music is mixed and mastered to perfection with a personable element felt in all memorable production moments. Only a hands-on, dedicated, vivacious, and contemplative musician can exude that both personally and musically, and Jimmy Gnecco, frontman of OURS, is exactly that. We recently chatted with him to discuss live shows, live music, and living life one stellar songwriting session at a time.

It’s been a few months since your spectacular, cosmic rock record dropped. What has the response been like? Because on our end, it’s non-stop looped, consistently jamming out to more than a handful of the tracks.

Oh, that’s nice to hear. The overall response has been all that we could hope for as artists and musicians. People are enjoying the songs and the spirit of the performances, so we’re happy. It feels good to have gotten it all out there.

Your approach to music has always been some sort of mix of DIY authenticity and artistic collaborations. Every OURS song feels like OURS. Is that why your latest record is self-titled? What was the reasoning behind that?

Yes. As it started to feel complete, it became clear to me that this was the most balanced record in the direction that I had originally intended for us. It felt like if there was to be one stop for people to hear and feel what we are about, this would be it.

There is a strongly felt and very positive back-and-forth between all band members. What makes you all gel so well? How important is that camaraderie for the music you make and the shows you put on?

We have always established a strong bond between us even before we played a note of music. That’s what keeps things positive and productive. A lot of communication, respect for one another, and true commitment to doing what is right for the songs.

Everything is anthemic and roaring, but also very contemplative and thoughtful. How do you go about creating a song and finding a balance that makes it good enough to be on a record, such as OURS, or even a single / music release, like “Bring It On”?

That’s a bit of a dance. This time around I recorded just about 100 songs. Then I had the daunting task of figuring just that out, what would fit together, and what was good enough. At the end of the day you just go with your gut and hope for the best really.

I love the pixelated, colorful, hypnotizing video for this track. It brings me back to the days of MTV without feeling outdated at all. How much of a role do you play in something on this end of the release of a song? You’re a masterful, multi-hyphenate musician and industry talent, but is the artistry and stylings your thing?

Thank you. I really enjoy the video, as well. Most of the footage was actually shot on an iPhone and then some was filmed by our friend, and often video collaborator, Jared Barel. I’m usually pretty hands-on with all of this stuff as far as ideas and angles and things, but Jared really brought this one to life. I sent him footage that we filmed, and asked for it to be heavily treated. I wanted a ton of effects on it to make it feel more like technology rather than a normal clean performance shot. I have always had such an issue with boring performance videos and have been trying to find the right balance over the years between putting ourselves on display and giving people access to us and still trying to keep creativity involved. I feel we found that balance on this one and Jared knocked it out of the park with his editing and creative choices on the treatment.

This tour of yours features 12 stops around the country, but the northern cities of Chicago and Seattle to those in the South like Austin and Atlanta. How does touring play into your songs and art? I can only imagine how much influence and inspiration meeting new people and going to new places can be. Can you think of any songs in your catalog or even on OURS, that maybe pulled from a live show or touring moment?

For me, touring has always had a huge impact on writing. So much open road, time spent traveling and thinking, playing with the band, and then the spontaneous moments that happen when in a new city with new people, so many new songs have come from being on tour. Staying with this record, I will say that many parts of “You Are the Answer” came from the road. April [Bauer] had a song with that lyric and I loved it. We were driving and I kept saying that I wanted to write a new song and use that lyric. We were in Texas with a day off and I remember sitting down and starting to come up with a new feel for a whole new approach on it… very vivid memory for me.

Speaking of touring and media, OURS has had some memorable and monumental moments throughout your career that put an emphasis on just how driven, versatile, and lovable you are as both musicians and people. Do you have any projects in the works that are worthy and able to share with us?

I do. While working on these past few records I have been developing and producing a few great artists. Hannah Gernand is a young female artist whose voice and soul will shake you to the core. I have known her since she was 12 and her voice has always been other worldly. We’ve been working on making a record that will be something all unto itself when we are finished. We’re almost there!

Also, a buddy of mine, Ronnie Shingelo, who is a great writer and vocalist, too. I feel we’re making the record of his life. As well, almost finished and last but not least, I’ve spent years developing, writing with, and basically being a band member with The Revel who have joined us for this tour. They’re a rock and roll band with a lot of love and energy for the music. [They] are really great live performers who are all about bringing the rock show.

Finally, after the year plus that we’ve all lived through, why do you think live music matters the way it does? Has your perspective changed at all? What are implementing or looking forward to this time around?

I think that there are great things about having alone time, so that we can get with ourselves and work out what we need to… but if we can manage to co-exist and come together with the idea that we are all here on this planet together and in the end the love that we feel when we do come together is far superior than feeing alone. Together we can do great things. I have always struggled with crowds and being able to express myself. Maybe shyness, maybe selfishness, not sure, but it’s something that I have devoted my life to getting better at. Communication, and coming together in spite of our differences – we could all use it now.

OURS’ SELF-TITLED DEBUT IS AVAILABLE WHEREVER YOU LISTEN TO MUSIC! THE BAND IS COMING TO DEBONAIR MUSIC HALL IN TEANECK, New Jersey ON SEPTEMBER 24! MORE INFO CAN BE FOUND HERE.