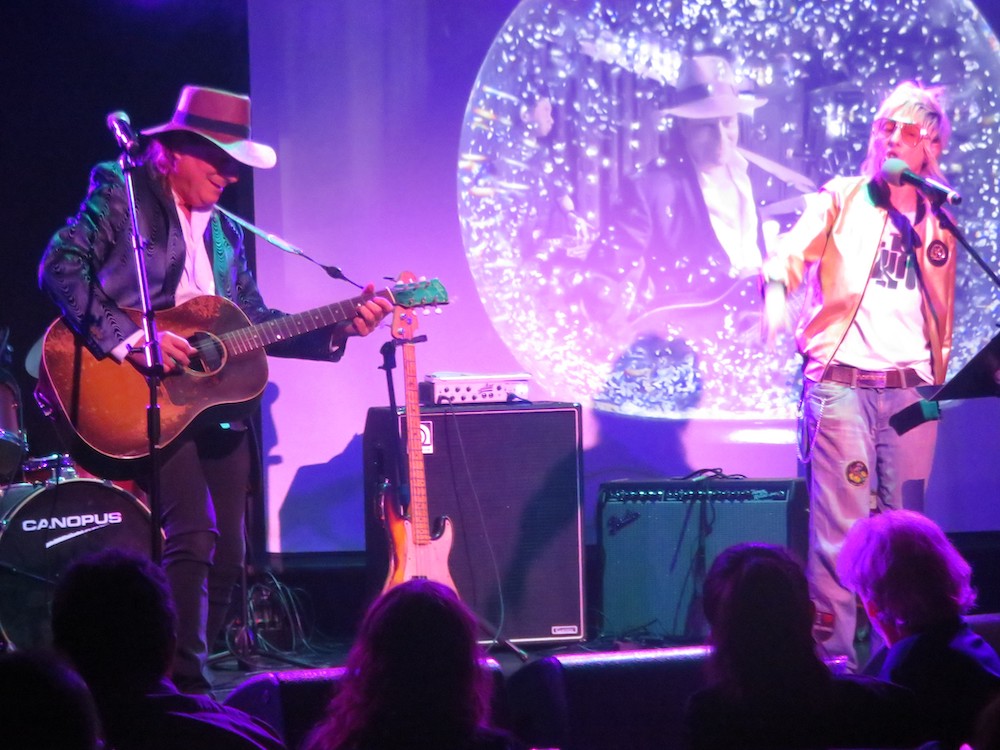 Gary Lucas has had an illustrious musical career in avant garde music and yet his profile has remained low enough that he is largely unknown to mainstream music fans. Lucas has released more than 35 albums as a solo artist or band leader. Forays with Captain Beefheart, Jeff Buckley, and Gods and Monsters are among his most celebrated projects. Lucas also has composed and recorded dozens of soundtracks. The Essential Gary Lucas, a 36-track, two-CD anthology released in January 2021, spans 40 years of Lucas’ music. Hence, his concert at le Poisson Rouge on September 11 presented numerous highlights from the guitarist/composer’s vast repertoire.

Lucas has toured in more than 40 countries. On this anniversary, he projected as a backdrop a slide show of his many world adventures as he played music from his catalogue. Lucas started the set performing solo, with portions accompanied by loops and other electronic sounds that he engineered by twisting dials. He sang a duet with Emily Duff, then invited on stage what might be the latest lineup of his band Gods and Monsters, consisting of keyboardist Jerry Harrison (Talking Heads), saxophonist Jason Candler (Hungry March Band), bassist Ernie Brooks (Modern Lovers), and drummer Richard Dworkin (Alex Chilton). All talented musicians, this combination led to extended solos and jams. As the two-hour show progressed, Lucas also invited on stage guitarist Thurston Moore (Sonic Youth), keyboardist Jason Candler (Gods and Monsters), and vocalists Richard Barone (the Bongos) and Felice Rosser (Faith).

Many of the songs came with a story. Lucas took a stab at the vintage Chinese pop he heard while living in Taiwan. Trixie Whitley was to sing Jeff Buckley’s “Grace,” which Lucas co-wrote, but she was unable to attend, so after telling the origin of the song, Lucas performed it as an instrumental. Lucas said “Jedwabne” was a Gods and Monsters song about a 1941 pogrom against the Jewish community in a small town in Poland where his mother’s family resided; he was inspired to write the song after attending an official government apology ceremony in Jedwabne 60 years later. “Lady of Shalott” featured lyrics that British biographer David Dalton had written for Marianne Faithful. As expected, Lucas reflected on his history with Captain Beefheart, as well. The curious stories were plentiful.

With no clearly defined set list except what was in his head and what he knew the other musicians could play, the performance saw considerable improvisation, from Rosser’s scat singing to Moore’s noisy guitar eruptions. Lucas is a virtuoso at both acoustic and electric guitar, and he showcased his ability often. Teamwork with his musicians floated the boat, even when the musicians seemed unsure as to where a song was going to end.

This was to say that there was not a period at the end of his 40th anniversary concert. Lucas is committed to advancing his experimentation and composing new music. His next area performance will be with Gods and Monsters at Elsewhere in Brooklyn on November 27.