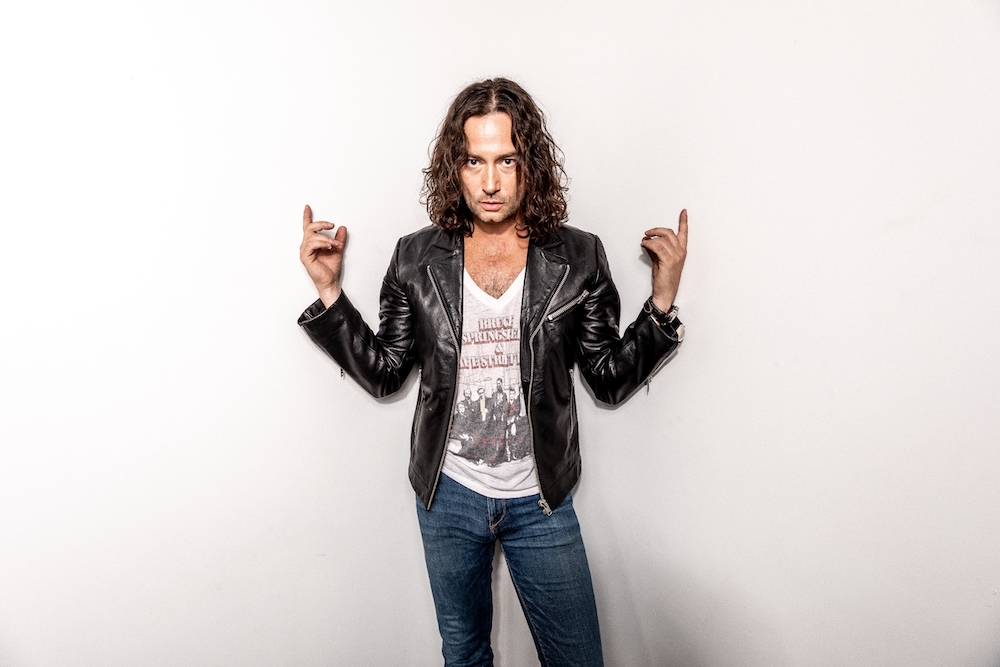 Bergen County’s premiere Performing Arts Center has hosted many shows with many artists over the years, but few have had the range, the skill, the perspective, and the heart as their forthcoming headliner, Constantine Maroulis, who is taking hit tracks to new heights.

“I think audiences just want to be entertained coming out of a nearly two year shut down and hear all the hits again,” says Constantine Maroulis, the voice of Foreigners Journey, a group that brings it’s highly acclaimed tribute to two of the most successful arena rock bands of all time to the Bergen PAC on September 25th. “The formula truly works, and we have been playing sold out shows all summer long.”

Constantine originally found fame on American Idol, winning legions of fans with his edgy, hard rock-tinged renditions of classic songs, and with his rock star looks, which were in contrast to the safe and sterile persona so many of the other contestants brought to the show. That led to his casting as the lead in the hit Broadway musical Rock Of Ages, a role that garnered him a Tony nomination. That show contained songs by both Foreigner and Journey, so it was a natural fit for him to join forces with the tribute group.

“Foreigners Journey have been cultivating a wonderful following throughout New England and into the Midwest for a few years now,” Constantine relates. “Of course, having Rock Of Ages and myself be synonymous in name over the years, it’s like a natural extension of my work on Broadway. The catalogs of both bands are so prolific and were an integral part of the success of Rock Of Ages. Both bands came a little bit before my time, but I discovered them later and it’s been so much fun adding my own flavor to these great vocals.”

Although a few of the songs were very familiar to him from his work on Broadway, he was able to connect with many of the others, as well. “Songs like ‘The Long Way Home,’ ‘Be Good to Yourself,’ ‘Jukebox Hero,’ ‘Double Vision,’ and ‘Faithfully’ all have these wonderful lyrical narratives that I connect to as an actor. Although they were not in ROA, I try to connect to the audience as an actor when I’m performing them with Foreigners Journey – internalize and personalize the lyrics to what they mean to me. This also helps me remember the lyrics and hit all the notes,” he laughs.

While the band has a full slate of shows, Constantine manages to find time for a multitude of other endeavors, including having his name attached to a number of upcoming Broadway productions as both a producer and actor, occasional reunions with his Broadway’s Rock Of Ages Band cohorts, and his latest venture, hosting a show on one of the giants of the New York radio scene, WABC. “I’ve had extensive experience contributing to radio content, having been an actor, a touring artist, songwriter, and producer for more than 25 years,” he explains. “I grew up with WABC. My father would play famed talk show The Bob Grant Show in the garage when we were fiddling with tools and stuff, and of course the Yankee games I grew up listening to. WABC also played all of the great pop radio songs in the eighties. In an effort to get their programming back to a hipper place, I think they brought me on to bring a new energy to the station. The Constantine Maroulis Show ‘Cuz Saturday Night Rocks airs every Saturday from 5:00pm to 6:00pm, live on 770 WABC, and streaming worldwide on wabcmusicadio.com.”

The show is a mix of music, interviews, commentary, and whatever else strikes Constantine’s mind. “I seem to be a sponge for entertainment news and stories,” he says. “This is rooted in my experience after American Idol as an entertainment host and contributor on major entertainment shows and national cable news. On my new show I open with hot topics from entertainment, My Pop Rock 60, and each week the show has a new theme musically, from yacht rock to nineties grunge, to the piano men, to the great female divas of the eighties and nineties. A recent show featured a huge Peloton star coach, Christine D’Ercole, and we curated the entire playlist to upbeat workout songs. I’ve had some other great guests: Lisa Loeb, Sophie B. Hawkins, Paula Cole, David Bryan, and more. Essentially the concept is the soundtrack of my youth, the MTV era, and some of the Rock of Ages selections that fans love from over the years.”

It’s actually not the first time Constantine has been heard on the airwaves. “My passion and knowledge of sports has led me to do some radio and podcast work in that medium, and I’ve enjoyed it very much, I love it!” he exclaims. “To have the chance to essentially curate my own show on one of the biggest stations in the country is truly a dream. To be able to start in the biggest market in the world… it’s hard to articulate how grateful I am!”

In between all his other projects, Constantine somehow found time to record an album of his own music, which came out last year. “It had been some time since I put out an original album. I found that after all of these years, I still have so much to say and so much to write about. It certainly wasn’t an optimal time to put out a record during the shutdown, but I’m very proud of the work that encompasses Until I’m Wanted. The album is made up of nine selections, and it was hard to choose which ones to record, having written dozens of songs. The lead single, ‘All About You,’ has had steady radio play on SiriusXM for the last year.”

To many, Constantine’s rise in the public eye was an overnight success story, but as is usually the case, his journey was much more involved than simply a TV show. “We left Brooklyn when I was quite young and moved to an affluent North Jersey suburb: Wyckoff, New Jersey,” he recalls. “My parents worked very hard to keep us afloat, and they desperately wanted a better life and school system for us. I was lucky to have amazing teachers growing up that encouraged my passion for the arts, but by the time I graduated high school, I wasn’t ready to go to a four-year conservatory or college setting. I played in some bands, went on some auditions, and it wasn’t until sometime later that I attended the Boston Conservatory at Berklee College of Music, and graduated their BFA program in musical theater. 9/11 happened during my final year there, and I lost my first cousin, Constantine ‘Gus’ Economos. My world was truly torn apart at that time, but somehow I got through it. That summer I attended the coveted apprenticeship program at the Williamstown Theater Festival, and there I met Michael Grief, who cast me in Rent. It wasn’t until after touring the world with Rent as ‘Roger,’ the afflicted pretty boy frontman, that I stumbled into the American Idol opportunity. I think going after it with the point of view of, ‘I need a gig,’ it really helped catapult me and my story.”

Rock Of Ages brought accolades and notoriety to him, but Constantine sees other goals as far as his acting career. “My dream to create a role on Broadway and see it become a worldwide brand done in schools and theaters all over the planet has been totally surreal,” he muses. “To be recognized for my work by my community with the best actor Tony nomination and a myriad of other awards has truly been a dream. We will always be married to each other, myself and ROA, but perhaps it’s time for someone else to make their mark in the show. Perhaps I could play another part, but as an actor I long to play the next great original role on Broadway or film again. That’s what we all want!”

And besides the recognition the show brought him, there was one other life changing event from his time there that had an even greater impact on his life. “Of course, meeting my daughter’s mother, Angel Reed, The Broadway Originals founder,” he enthuses, “who gave me my beautiful 10-year-old Malena James. She’s truly a Broadway Baby!”

Constantine prides himself on being versatile, whether it be playing his original music or interpreting someone else’s, or starring in Broadway shows, film, or television. “It’s been most important for me to build a body of work I can be proud of and that my daughter can be proud of one day,” he says. “My grandparents came here 100 years ago with nothing. They were gone when I was quite young, and I hope they look over me and they’re proud that their name lives on under the Broadway lights.”

YOU CAN CATCH CONSTANTINE WITH FOREIGNERS JOURNEY ON SATURDAY, 9/25 AT BERGEN PAC IN ENGLEWOOD, NJ. FOR TICKETS AND INFO ABOUT THE SHOW/BAND, VISIT THEIR WEBSITE! FOR MORE ON CONSTANTINE AND HIS PROJECTS, CLICK HERE!