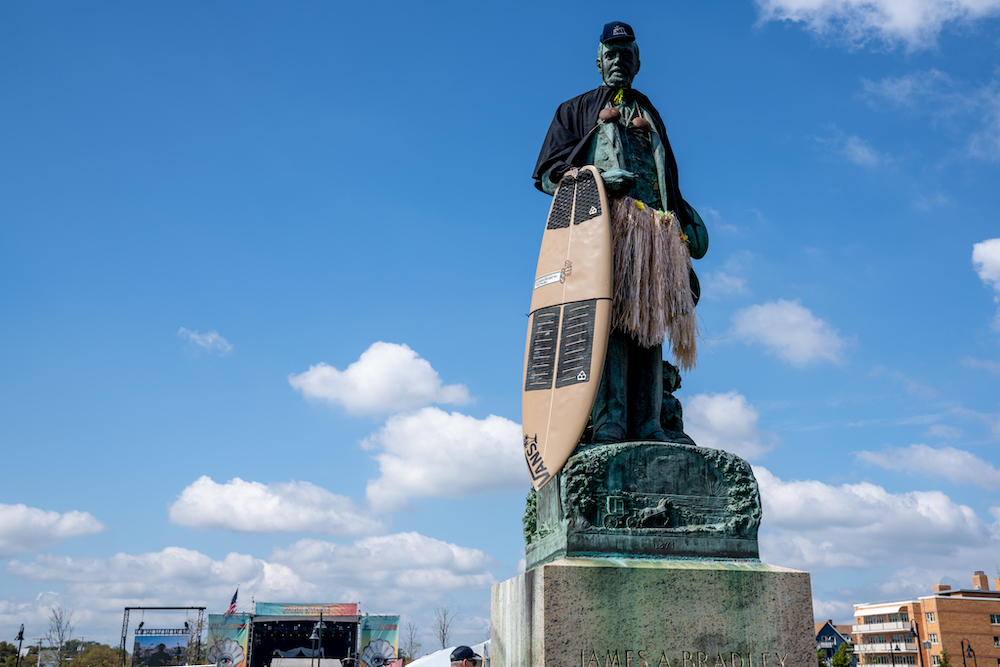 The shores of Asbury Park and its symbolic boardwalk are known for their delectable treats from small business, the cranking waves offshore, and crowds of everyone from artsy locals and enthralled bennies to surfers and foodies. Where all of that comes to a head year-after-year is Sea.Hear.Now, so with the accompaniment of 20-something bands and a history-making, Bruce Springsteen-celebrating performance from Eddie Vedder, the festival is truly something special for all who stop by… but especially for our writer/photographer duo, Taylor Adzima and Anthony Vito Cosentino.

Sea.Hear.Now has already become known as a legendary annual Asbury Park music festival, and fans were eager to see its return this year after the unfortunate events of 2020 led to its postponement. This two day festival, consisting of savage surfing displays, impressive artwork, and a plethora of rock talent from all over the states, made its long-awaited return to the gorgeous Asbury Park Boardwalk on September 18. Though I only had the opportunity to attend on Saturday, Day One, by the end of my time there I’d been blown away by the acts I did get to see perform.

As I’m sure many of you know, festivals are always a rewarding experience, though they are too often an exhausting affair. This was not the case at Sea.Hear.Now; from the opening gate to the end of the evening, everything was streamlined and speedy. At the doors, the festival staff got everyone through the gates quickly and efficiently, while Black Flamingos, hailing from our very own Asbury Park, performed as the opening set for the day at the Park Stage. Black Flamingos can be described as a local instrumental surf rock five-piece. It will forever be a heartwarming feeling to see a local band flourish. While walking in and preparing for the day ahead, their set was a serene, and even psychedelic, backdrop, setting the tone for the rest of the festival.

Hirie was the first act that we were able to observe once we had reached the Surf Stage, and the first thing that caught my ear was the out-of-this-world brass section. I’m a sucker for brass in musical pieces, so from there I was hooked. Hirie is an explosive seven-piece reggae band from California that crossed the country to perform a mesmerizing set for NJ. “I Like The Way You Roll” featured a vocal solo by their saxophonist Chris Hampton, and as the song came to a close, Hirie addressed the growing audience. “I’m a small town girl… we’re an independent band, always have been,” she says, expressing her gratitude for the fans’ support that helps them do what they do. This group of multi-instrumentalists and powerful frontwoman were impressive to say the least; the San Diego band included a bomb mix of vocals, guitar, ukulele, saxophone, flute, melodica, accordion, trombone, guitar, didgeridoo, percussion, bass, guitar, and drums.

We made our way down the boardwalk back to the Park Stage, where Briston Maroney would be performing his set. Briston is an artist that sounds immaculate live, and he was my most anticipated performance of the festival. He opens with one of his most loved pieces, “Caroline,” and right away you can tell it would be an emotional performance. He played more fan favorites, “Still Cool If You Don’t” and “Freeway,” before addressing the crowd, as well. “My name is The Smashing Pumpkins, thank you guys for coming.”

During “Fool’s Gold,” Briston and the guitarist really got into it, jamming side by side on their guitars. Alongside my partner and I for the majority of the Park Stage sets was a wonderful camera operator named Kurt, and a vibrant woman from the Philly area named Rebecca. We caught shots of both of them having the time of their lives, as Rebecca grooved to music toward the back of the large audience.

Briston and his band put on a fabulous, from-the-heart show on the Park Stage, exiting after performing their hit, “Freakin Out On The Interstate,” to which the crowd emotionally sang the words. He later followed up with an intimate solo set inside the beautiful Clinch Art Gallery tent.

White Denim, a rock quartet from Austin, Texas, was next up at the Park Stage. This band goes far beyond just rock, sprinkling in influences of jazz, blues, and soul into their work, as well. They drew a large audience and I noticed the most dancing during the day was done throughout their set, but especially during “I’d Have It Just The Way We Were.” This song featured a fanatical guitar solo. There were a lot of good close ups on the monitor of the drum-work and guitar solos, too, showing that the way in which this band jammed non-stop throughout their set, with rarely a break to breathe in between mad guitar solos, was incredibly impressive.

Following up, we caught the soundcheck for Goose before their on-fire set. The jam-band from Connecticut opened with “Yeti,” to which the die-hard Goose fans screamed along as the entire audience bounced and swayed. “Yeti” is a very long piece, so there were many things to appreciate about it: dreamy guitar solos, their love for the whammy bar, and ambient bongos, to name a few. “If you haven’t seen us before, thank you for having us,” Rick said after their first song. Goose has a style that is based in a lot of melodic guitar with uptempo blues and early rock and roll. It was at this point that the entire park, as well as the surrounding blocks, were flooded with people. The full scope of the festival could start to be measured. Goose is definitely a band that has such a universal sound that people young and old will appreciate – and did on the beach this weekend. By their second song, they had captivated the Park Stage and everyone in the vicinity.

Lord Huron was the main act at the Park Stage that night, and as the sun went down, we watched the crew assembling their Western stage setup, which included neon sand dunes and glowing cacti among the horizon. When it was finally completely dark out, Lord Huron took the glowing stage as the stage techs brought up the stage lights.

Lord Huron open with “Not Dead Yet,” one of their newest tracks, and the audience packed with superfans was untamed. As they started to play their second song, “Fool For Love,” the camera crew panned in on the bassist who consistently looked extremely focused and calculated in his playing, but still interacted warmly and sincerely with his audience. In electric/acoustic wonder, they played “Hurricane (Johnie’s Theme),” and Ben Schneider demonstrated his mastery as an energetic frontman, swinging his guitar and banging his head through the entire set. “Mine Forever” had gorgeous harmonies, as well, and the melodic song had the whole crowd moving in time. Schneider addressed the audience here, mentioning how happy they are to be there. The band played two emotion evoking cult classics, “Wait by the River,” and “The Night We Met,” to finish off their fabulous set.

Pearl Jam, the headliner for Day One, had garnered such an audience at the main Surf Stage that we were unable to move toward the boardwalk, confined to the grass below. The event had become just that – an event – when it came to the iconic band. On-listeners piled into the surrounding streets, hundreds of people lined the boardwalk, and even more packed onto the beach to catch just a glimpse of the grunge rock legends’ amazing set.

Sea.Hear.Now 2021 was a surf rock dream of a day. Every performance captivated their audiences, while between sets there was plenty more to take in and fill out the day. Surfing competitions and art displays in the central area of the beach did just that for attendees. You even had the chance to do your part and save the environment by collecting cans to recycle throughout the day, with exclusive Sea.Hear.Now merch being your reward for a job well done! This leisurely, legendary, beachy rock and roll experience was once again a can’t miss day in Asbury Park! Until next year, SHN fest!