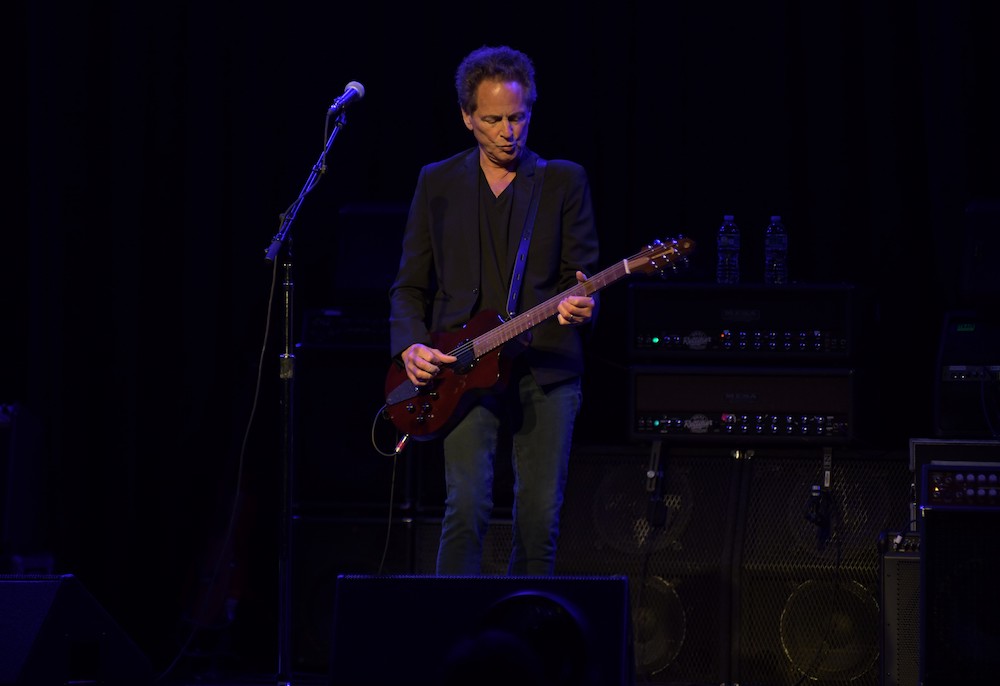 Lindsey Buckingham busted through his 20-song set at New York City’s Town Hall like he had something to prove. Taking on the naysayers, some well publicized bouts with his Fleetwood Mac playmates, a life-threatening illness, and a new album (Lindsey Buckingham that sat in the can for three years), he worked the stage with the confidence and swagger of a guitar slinging axeman shooting from the hip and out for redemption.

Dressed in a black blazer and blue jeans he looked like a SoCal lounge lizard with some serious downtown scores to settle. With a four-piece backup band in tow, they morphed Buckingham’s angular guitars and cathartic howl onto the mantle of the avant-garde on the non-Fleetwood Mac numbers, delighting all with some tasty sounding power pop. On the Mac numbers, he added just enough grit to keep them edgy and fresh.

Multi-instrumentalist Brett Toggle and guitarist Neale Heywood were the foils to Buckingham’s blistering solos. Drummer Jimmy Paxson laid down the solid rhythms adding some funky beats throughout the bands polished noise that took on the rattled quirkiness of his days in Fleetwood Mac and the delirious melodies of some of Brian Wilson’s solo works.

Opening with “Not Too Late,” he set the pace with his punchy fingerpicking and by the third one, “Soul Drifter” from Out of the Cradle, as well as “I Must Go” from the 1984 album Go Insane, things got personal as the show took on Buckingham’s demons from the past and present.

An acoustic mini set followed the first round of rockers including “Trouble” and Fleetwood Mac’s “Never Going Back Again” that went from a whisper to a roar as Buckingham picked his Taylor guitar (with a Capo on the 2nd fret for all you guitar freaks out there) like an old time folkie. “Big Love” was a turbo charged strum-athon of pulsating rhythms, climatic release, and a loud ass “O Yea!” that was the guitarists’ battle cry throughout the night as he blasted through yet another six-stringed showdown.

Some new ones followed, too, including “Scream” and “I Don’t Mind” that were mini power pop overtures lacking any big guitars, but still felt classic Buckingham. The junglelike beats of his former band’s hit “Tusk” jumpstarted the grand finale as Buckingham moved about the stage in circles like a man on a mission to rock. “I’m So Afraid,” from the first Fleetwood Mac album Buckingham played on, was a bluesy shoutout to the memories of Jimi Hendrix and ex-Mac guitarist Peter Green as he ramped up and then wailed through twelve-bar blues while stalking the lip of the stage and staring down the crowd like a psychedelic shaman.

“Go Your Own Way” ended the set with standing room only for some well-deserved boogie time. Buckingham paced stage left (and then right) for the final chorus, teasing and then offering up his guitar to fans for a strum, and thanking the crowd for its support.

At the encore he introduced the band proudly stating his adoration for each member and their “lack of politics and concise vision.” Acknowledging the past few years’ difficulties and it’s “convoluted road to get here,” Buckingham and friends ended it all with the acoustic encores of “Love is Here to Stay” and “Time.” These two took things down quietly and ending a glorious night from the former Mac rocker.