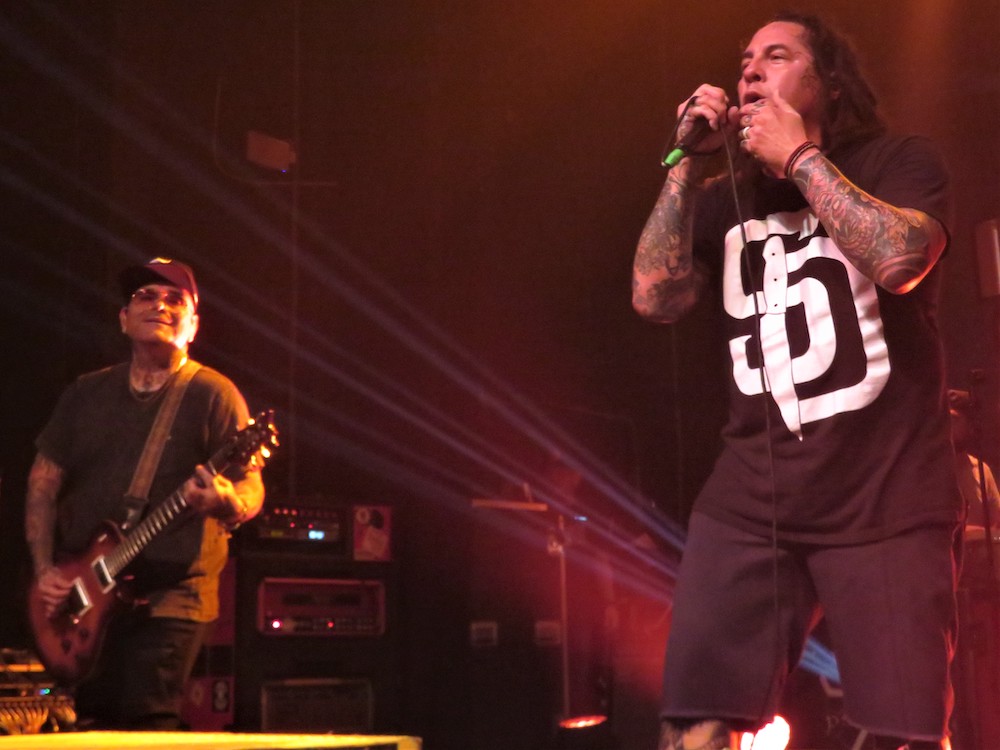 P.O.D. was a major rock force at the turn of the century, with platinum-selling albums and major rotation on MTV’s Total Requests Live. Trends and fortunes changed quickly, however, and the band never repeated that level of success. This is a common path trodden by many bands of that period.

P.O.D.’s 2001 Satellite album was the band’s most successful, selling more than three million copies. The lineup that recorded that album (vocalist Sonny Sandoval, guitarist Marcos Curiel, bassist Traa Daniels, drummer Wuv Bernardo) is celebrating the 20th anniversary of that success with a live concert in which P.O.D. plays the album start to finish. The band did not play only one track live, the instrumental “Guitarras de Amor.” Instead, the 1:15 track was played over the public address system as P.O.D. came on stage.

P.O.D. started with the opening tracks of the Satellite album, the hard and heavy melodic rap-rocking “Set It Of,” “Alive,” and “Boom.” The revved-up audience responded by singing along to the positive messages of the lyrics. By the time the band got to the fourth song, “Youth of the Nation,” it seemed like the audience was doing most of the singing. Sandoval was losing vocal power. Unbalanced sound and a microphone that flickered on and off repeatedly began to plague the early part of the set, so much so that by the time P.O.D. got to “The Messenjah,” the band had to stop and wait for a fix before restarting the song from the beginning.

Now the sound was better but the lighting was not. Deep red and blue stage lights meant that for much of the set the audience saw silhouettes of musicians moving on stage, but were unable to make that intangible connection that happens when musicians are clearly seen. By this time, the better-known songs from the Satellite album had been played, and the band was now testing the audience’s interest in seven consecutive deeper cuts.

With the 15 songs from Satellite done, P.O.D. performed “Soundboy Killa,” a little-known song from its most recent album, 2018’s Circles. This was followed by five songs from earlier albums, including “Sleeping Awake,” which was written for a Matrix movie. No new songs, and some favorites like “Rock the Party” were not performed.

In all, the concept of playing Satellite in its entirety might have sounded like a good idea, but maybe the reality was not as fruitful as hoped. Although P.O.D. performed well, this was not the band’s best show, as it was marred by the sound, lights and an uneven song selection. Hopefully in the near future the band will record and perform new songs that equal the impact of its catalog from 20 years ago.