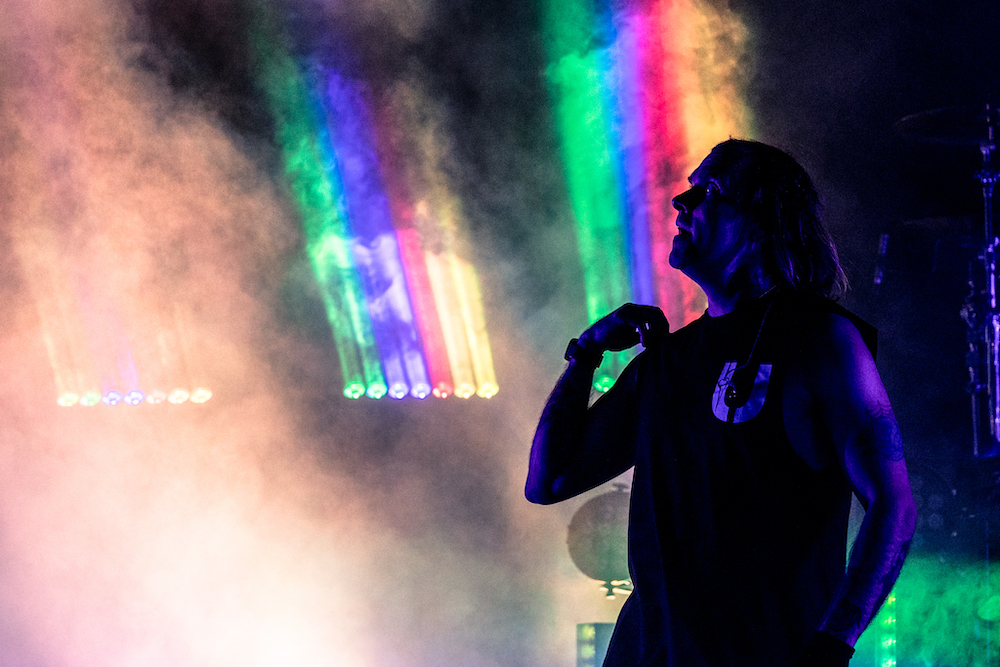 All at Once Coheed & Cambria and The Used Took the Stage, the Stream, & the Screen

Power combo Coheed & Cambria and The Used celebrated 20+ years of touring and togetherness with New Jersey at PNC Bank Arts Center on September 19. This spectacular show at PNC was livestreamed worldwide for a one time live viewing, a special event that Coheed and The Used had cooked up. I hadn’t personally been to the PNC Bank Arts Center in years, and the sheer amount of fans packed into one amphitheater to rock out to the same music remains an awe-inspiring scene.

We marveled as we watched the crew set up the most massive lightshow I’d ever seen with rainbow strobes wall to wall. Just before The Used stormed the stage, their iconic glowing red heart descends from the rafters as a haunting intro plays. The entirety of the seated audience all at once stood up in anticipation and screamed at the top of their lungs as the band entered, playing “Take It Away” from their 2004 record In Love and Death. Frontman Bert McCracken gave an electrifying performance of “The Bird and The Worm,” a cult classic from The Used. Bert stopped to tell us we were being livestreamed that evening. “Hey, New Jersey,” he yelled. “You finally get to be famous!” The crowd cheered and whistled as he went on to say that they want to make it very clear: “The Used has been, and always will be, an emo band.” Bert then tells the Garden State fans that he wanted to give us all a “big, sloppy, COVID-19-free kiss.”

Bert was wearing a mutilated tour-tee-turned-tank, soaked through at this point in the show. They play “I Caught Fire,” followed up by a snippet of an endearing cover of “Kiss Me.” McCracken discusses the importance of mental health awareness, saying, “You are not alone, I can see the light at the end of the tunnel.” He also touched on COVID safety for the sake of live music. “If you’re an anti-vaxxer, raise your hand! Ok, keep your hands up, and you’re welcome to come up onstage so I can give you a good spanking.”

The Used really flaunts their theatrical nature onstage. Their light show kicked into full gear by the time they were midway through “Paradise Lost.” This was hands down the wildest lighting I’ve ever seen at a concert. Bert hams it up for the camera, too. “Out of everywhere in the world,” he starts “New Jersey is one of the best places to play.” As he paces the stage while they get ready for the next song, stating, “This one’s about race and gender equality and trans rights and gun violence…” he jokes of their song “Blow Me.”

“It doesn’t feel real that we’ve been on tour for 21 years,” Bert says warmly to everyone watching, in person and at home. As an homage to their 21 years, they played the hit from their debut record, “The Taste Of Ink,” to incredibly enthusiastic and die-hard fans. They created the biggest sing-along I’d ever been a part of. The Used played quite a few deep cuts that night for their fans who have been with them since the beginning, but it truly was a very nice sentiment that only added to this already bewitching performance.

The projectors displaying the live stream pan in on Bert, filling the screen with tattoos and piercing blue eyes. As they play “All I’ve Got,” he stops the music to work the crowd, hyping them up even further. As the show went on, I wondered how the drummer felt about a giant red heart suspended by rope above his head every night. Their drummer is very stylistic and energetic, throwing sticks to the audience, and he was a major draw of focus. It’s also worth noting that Bert performed two Shakespeare soliloquies for his daughters watching at home. The band then closed with a medley of Nirvana’s “Smells Like Teen Spirit,” which is Bert’s personal pick for Best Rock Song of All Time, and their own “A Box Full Of Sharp Objects.”

The glowing heart descends in all of its glory as a larger than life Coheed & Cambria banner falls slowly to ominous music, revealing their classic logo. Once the stage was set, Coheed ran out and performed a 15 minute rendition of “In Keeping Secrets of Silent Earth: 3,” which features some outstanding solos that were just a taste of the impressive guitar prowess we would witness. During “No World For Tomorrow,” the drummer slams on his kit as hard as frontman Claudio wails on his microphone – his signature hair flowing down his face as he shreds his guitar. They couldn’t let the night go on without a performance of their newest single, too, “Shoulders,” with it’s wickedly funky guitar work. Now was the time that the crowd was at full capacity.

Coheed & Cambria wanted to pack as much music as they could into their set, working the crowd less often than Bert and the members of The Used, but the music spoke for itself with flawless execution of their best work. Coheed played “The Suffering” and “Ten Speed,” two fan favorites from perhaps their most popular album. This audience did not need any hyping, as they were steadily headbanging and getting as rowdy as they could given the space they were provided in the seated amphitheater.

Appropriately, they played “Devil In Jersey City,” stopping to say that the tri-state area means so very much to them as New York is their home. Claudio runs around the stage flailing with the microphone as the audience sings the chorus, a sound larger than life. “This band’s been around 20 years…” Claudio says, “Give a round of applause to yourselves.” The frontman flawlessly transitions from speaking voice to screaming and back to singing, which takes intense vocal training. Their encore included “Unheavenly Creatures,” a cut from their most recent studio album that is beloved by fans, followed by the closer – possibly the most recognizable Coheed hit – “Welcome Home.” This was the most appropriate finale for the band’s return to their adoring fans in New Jersey.

PNC Bank Arts Center has put on a slew of stellar shows since its reopening, and Coheed & Cambria and The Used were no exception. I’m not sure if it’s possible to be a fan of just one or the other.  This was a sure-to-please pairing for the PNC stage, and I’m certain that super-fans, both present and watching at home, had the night of their lives.

FOR MORE ON COHEED & CAMBRIA’S UPCOMING PROJECTS, VISIT THEIR WEBSITE! FOR TOUR DATES AND INFORMATION ON THE USED, CLICK HERE!