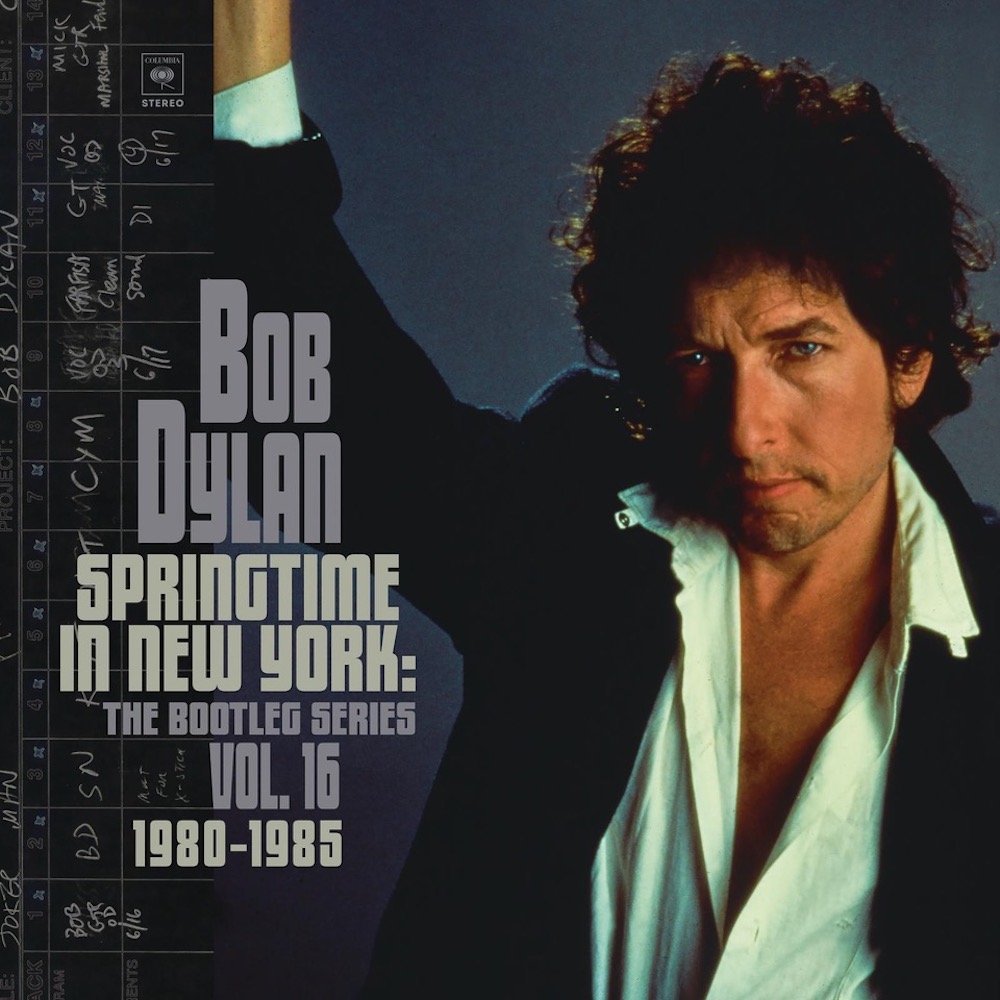 If you’re a serious Bob Dylan fan, you might want to start thinking about adding a room to your home to store your collection of his CDs. In addition to his dozens of regular releases, he has issued such mammoth sets as the 14-disc The Rolling Thunder Revue: The 1975 Live Recordings and the 36-disc The 1966 Live Recordings. And then there’s the justly acclaimed Bootleg Series, which began with a 1991 three-CD collection that was labeled “Vols. 1–3” and has continued over three decades with many multi-disc anthologies. The new Springtime in New York (1980–1985) is Vol. 16, but if Dylan’s label had stuck with giving a volume number to each CD in each release, the deluxe five-disc edition of this set would be Vols. 49–53. (Two-CD, two-LP, and four-LP versions are also available.)

Given the abundance of material, you might expect that we’d be scraping the bottom of the barrel by now, but as recent Bootleg Series releases, including this new one, make clear, that’s hardly the case.

Like Vol. 10: Another Self Portrait (1969–1971) and Vol. 13: Trouble No More (1979–1981), Springtime in New York focuses on a time when many observers were deriding Dylan’s work and suggesting that his best days were behind him. In each period, though, he issued some great material and followed it with much more. And in each case, Bootleg Series volumes have underscored the extent to which his work at the time was under-appreciated – or, in many cases, simply unreleased.

The sturdily packaged deluxe edition of Springtime in New York – which includes a 104-page hardcover book with rare photographs, insightful liner notes by Scottish writer Damien Love, and track-by-track commentary – incorporates 57 recordings. Only two of them have been previously released as they appear here, and neither has been easy to find: “Let It Be Me” is the B side of “Heart of Mine,” an international single; and “Don’t Ever Take Your Love Away” is on an out-of-print album called Hawaii Five-O: Original Songs from the Television Series. A third number, “Death Is Not the End,” is an Infidels outtake that surfaced on Down in the Groove but in abbreviated form.

(Versions of a few of Springtime in New York’s other songs do appear in previous volumes of The Bootleg Series. As a producer’s note indicates, the ones here are different and “are included here to illustrate the musical journey Bob Dylan undertook during these years.”)

Rehearsal tapes for Dylan’s fall 1980 tour dominate the new anthology’s first disc, which also includes an outtake from 1981’s Shot of Love: a reading of Junior Parker’s “Mystery Train,” the 1950s rockabilly classic, that is notable for the inclusion of drum work by Ringo Starr. Also here are an appropriately ominous-sounding version of “Senor (Tales of Yankee Power),” a song that appeared on the way-underrated Street Legal in 1978; and a fine radically revamped reading of Dylan’s old “To Ramona” that features mandolin, organ, and backup vocals by Clydie King, Regina McCrary, and Dylan’s then-future wife Carolyn Dennis. (The tape of this song appears to clip off the first seconds of the performance but the other tracks are all quite well recorded.)

In addition, there are a variety of interesting covers that might seem surprising if we hadn’t heard Dylan repeatedly belie his image in earlier releases. (You should be ready for just about anything, for example, after hearing him interpret such 1950s hits as the Fleetwoods’ “Mr. Blue” and the Rays’ “Silhouettes” on The Bootleg Series, Vol. 11: The Complete Basement Tapes Complete.) Dylan delivers “A Couple More Years,” the Dr. Hook hit co-written by Shel Silverstein; Jim Krueger’s “We Just Disagree,” the Dave Mason song; and Dion’s “Abraham, Martin, and John.” Also here: a nuanced reading of Neil Diamond’s “Sweet Caroline” that manages to make it sound like something Dylan might have written.

Outtakes from the Chuck Plotkin–produced Shot of Love, his final born-again-Christian LP and one of his most forgettable albums, fill most of the second disc, and several of them surpass what that record delivered. Highlights include covers of Hank Williams’s “Cold Cold Heart” and Dylan’s own lyrically rich “Angelina.”

Discs three and four, which showcase outtakes and alternate takes of material from 1983’s Infidels, is where things start to get really interesting. This is where you’ll find two versions of that album’s compelling “Don’t Fall Apart on Me Tonight,” both of which outshine the originally released rendition, as well as an excellent full-band rendition of “Blind Willie McTell” and “Something’s Got a Hold of My Heart,” an early version of Empire Burlesque’s infectious “Tight Connection to My Heart (Has Anyone Seen My Love).” Also here are acoustic and band recordings of the memorable “Too Late,” which evolved into the arguably inferior “Foot of Pride” (which appears on Bootleg Series Vols. 1–3 and, in another version, on disc three of this box).

The fifth disc is even better. It consists mostly of alternate versions of tracks from the underappreciated Empire Burlesque, including “Emotionally Yours” and “I’ll Remember You,” two of Dylan’s most nakedly emotional compositions, and a version of the aforementioned “Tight Connection to My Heart” that strips off some of the gloss that characterized Arthur Baker’s mix. Also here are two live numbers: “Enough Is Enough,” from a show at Slane Castle in Ireland, and a blistering “License to Kill,” from Late Night with David Letterman, which features backup by the L.A. punk group the Plugz. Although, the disc’s highlight is “New Danville Girl,” a 12-minute recording of a song that Dylan wrote with playwright Sam Shepard and that with some lyrical changes evolved into the cinematic “Brownsville Girl,” the song that transformed 1986’s otherwise lackluster Knocked Out Loaded into a must-have album.

Throughout, Dylan enjoys backup from a star-studded list of musicians who appear fully engaged. In addition to Starr, for example, he enlists the E Street Band’s Stevie Van Zandt and Roy Bittan for slow and fast alternate takes of Empire Burlesque’s “When the Night Comes Fall from the Sky.” The rhythm section of Robbie Shakespeare (bass) and Sly Dunbar (drums) appears on many of the tracks. Other luminaries who show up here include the Heartbreakers’ Mike Campbell, Howie Epstein, and Benmont Tench, as well as Donald Dunn, Jim Keltner, Danny Kortchmar, Mark Knopfler (who coproduced Infidels with Dylan), Mick Taylor, and Ron Wood.

Not everything on this nearly four-and-a-half-hour collection impresses. It’s easy to see, for example, why Dylan didn’t feature such plodding numbers as “Fur Slippers” and “Need a Woman” on his regular studio albums. Ditto the hard-rocking “Julius and Ethel,” a lyrically and musically trite number about the Rosenberg case – but there are far more winners than losers among these 57 tracks. It’s amazing to think that these are virtually all recordings Dylan discarded, given that many of them outshine everything in lots of artists’ entire catalogs.