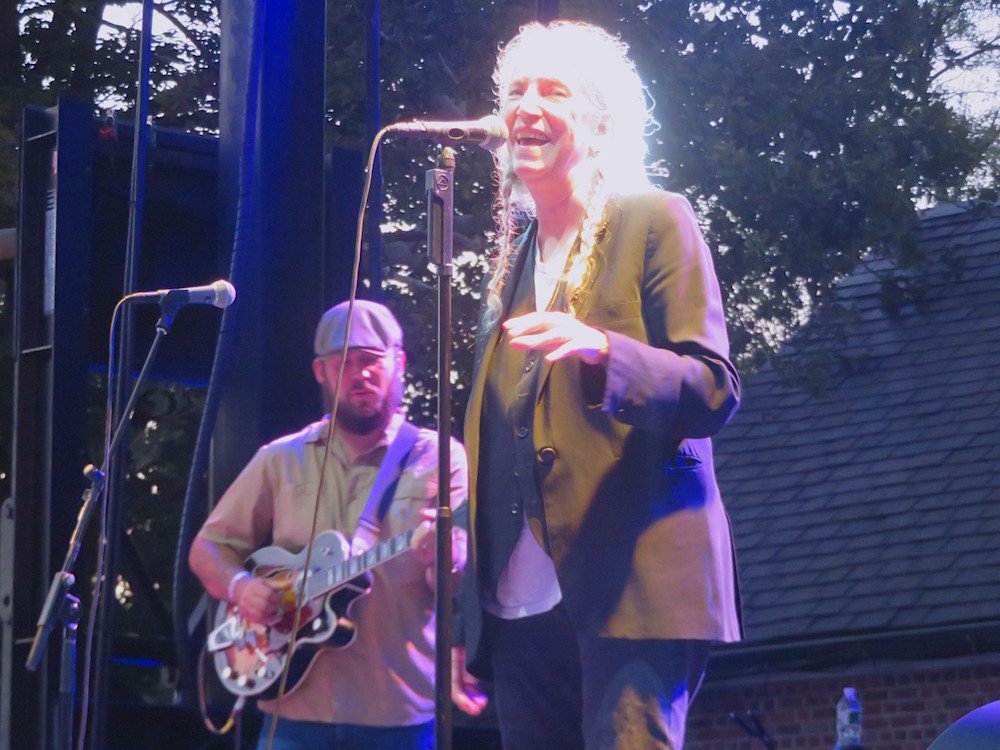 Patti Smith & Her Band at SummerStage in Central Park / September 19, 2021

Patti Smith was supposed to end her COVID hiatus from live performances at the We Love NYC concert in Central Park in August, singing with Bruce Springsteen on their collaborative song, “Because the Night.” Shortly before Springsteen and Smith were to share the stage, a nearby lightning storm forced the promoters to cancel the rest of the concert. A month later, following weekend performances at Riot Fest and Sea. Hear. Now, Smith and her band performed a free concert under clear skies in a smaller area of Central Park.

Dressed in her standard wardrobe of black three piece suit and white t-shirt, Smith started and ended the 90-minute performance as a healer. Speaking to the audience often, she acknowledged the communal pandemic-inflicted pain, losses and deaths. She thanked her audience for taking care of itself throughout the pandemic.

Smith was accompanied onstage by her longtime bandmates, guitarist Lenny Kaye, bassist Tony Shanahan, and drummer Jay Dee Doherty, plus her two children, guitarist Jackson Smith, and keyboardist Jesse Paris Smith. Smith and Kaye dedicated various songs throughout the set to influential persons who died. Early in the concert, Smith dedicated the reggae-inspired “Redondo Beach” to the late Jamaican record producer Lee “Scratch” Perry. She quoted Saturday Night Live‘s Norm MacDonald before dedicating a cover of Stevie Wonder’s “Blame It on the Sun” to MacDonald. Before launching into “Beneath the Southern Cross,” she eulogized the Rolling Stones’ Charlie Watts, whom she said was one of the nicest people she ever met. Smith took a quick breather as the band performed a medley dedicated to Hilly Krystal, owner of CBGBs, with a cover of the Rolling Stones’ “I’m Free” (Kaye on lead vocals) that included an interlude of Lou Reed’s “Walk on the Wild Side” (Shanahan on lead vocals). Smith recalled her late husband, the MC5’s Fred “Sonic” Smith in the introduction to “Because the Night.” She also acknowledged the living, leading the audience in singing “Happy Birthday” to her superfan, George Kazepis.

Smith performs frequently, especially in the New York area, but her recordings of new compositions have been slim in the 21st century. Her most recent album is 2012’s Banga. As a result, any random entries introduced into her live performance are welcomed, including tonight’s covers of Bob Dylan’s “One Too Many Mornings” and Stevie Wonder’s “Blame It in the Sun.” Smith also returned to her spoken roots with a poem “Perfect Moon,” a paean to welcome in the approaching harvest moon appearing through the trees and rising in the east, gliding seamlessly “Dancing Barefoot.” Towards the end of the night, Smith recited, perhaps extemporaneously, transforming “Land” into a fresh composition and leading to her take on Them’s “Gloria.”

Smith is a unique poet and rock performer, and tonight’s concert in the park demonstrated how alive she remains at age 74. The band, formed around her eclectic style, supported her more than ably. Close to 50 years after she moved to New York City, Patti Smith and her band continue to epitomize the merging of downtown New York’s poetry and rock and roll scenes like no other.