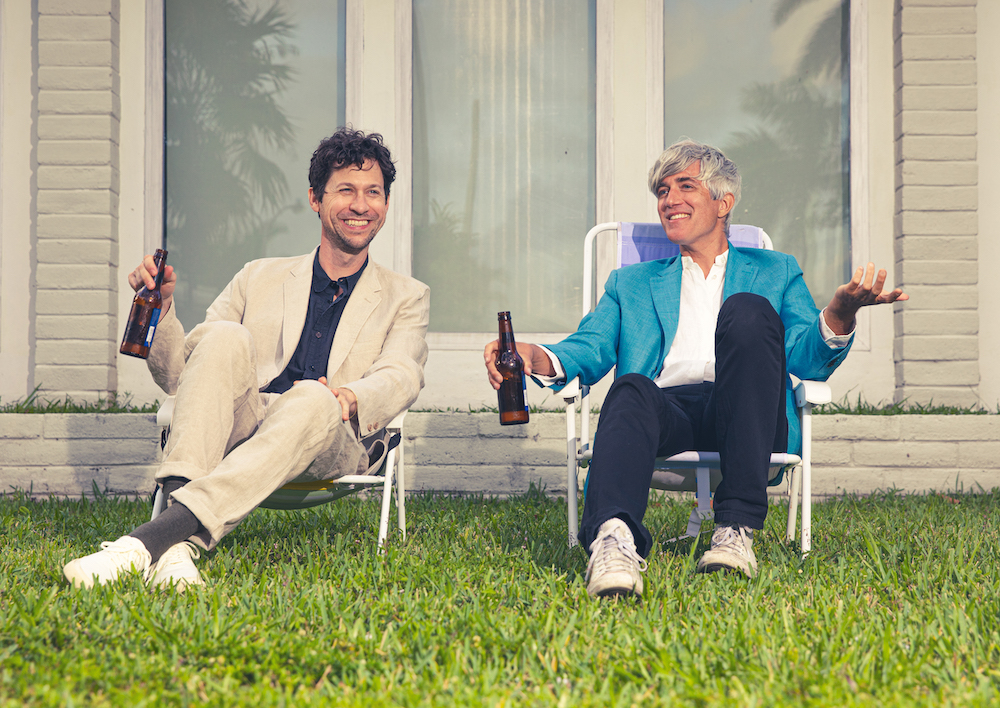 Huffy comes out on Friday, and even though it’s the seventh record from We Are Scientists, it comes across as a band just finding themselves (and their sound) again.

Keith Murray, the singer and guitarist for We Are Scientists, is as personable as can be. We knew that seven years ago when chatting with him resulted in the deadpan answer of, “I think especially early on in our career, when nobody seemed to care about our band, it was a way for Chris [Cain] and I to keep each other entertained,” while discussing the comedic aspect of the indie rock duo.

Sure, Murray and bassist Cain can sing, write, play instruments, and tackle all the much-needed elements of being a successful and tasteful band. They’re still hilarious, raw, and rousing in every aspect of what they do. It’s quirky, but it symbolizes something bigger than a band who laughs at themselves as well as with themselves. We Are Scientists are their own corner of the modern music scene in how they maintain that what they are doing is, and will always be, about the art.

The last single ahead of their new album, Huffy, is “Sentimental Education.” It’s out now alongside a video that is just as thought-provoking as their last (for “You’ve Lost Your Shit“), but more lyrically-savvy than the record’s lead single (“I Cut My Own Hair“). We talked about all of that eye-catching, occasionally nostalgic evolution with Murray himself for this feature and, once again, it’s a personable moment to remember.

You’re two decades into your career and the landscape of genres has truly shifted over that time. We Are Scientists have survived the pop punk era, the pop era, the hip-hop era, and so much more. What about this band keeps the music, and the making of the music, still as riveting as it was, say, during the recording of With Love and Squalor?

It’s hard for me to say, I guess. We just make music that we like – we’ve never really thought of ourselves as part of any particular scene or genre, even on our first album, when we clearly slotted right into the disco punk thought that was happening.  Even then, though, we got put on rock festivals and indie festivals and pop festivals and emo festivals, all of which were fine (except for the emo festivals). We listen to lots of different music, so we’re not particularly excited about sounding too much like any one, calcified thing.

Speaking of genres, Huffy, the brand new LP from you, takes a fresh look at what rock can be in modern times. There are elements of this edgiest aspect of the punk revialist era and the classics, but also an understated appreciation for the songwriting and storytelling of the indie scene. What were you all listening to when shaping this record and building it from the ground up?

Hmm, I think we were listening to lots of Phoebe Bridgers and Justin Bieber and White Zombie and Selena Gomez. Who knows? I kind of just like anything that has a good melody and doesn’t sound too overly-manicured.

It’s been three years since the last album dropped, and let me tell you, Megaplex was a force to be reckoned with. I mean, “Mega” is in the name, but in all seriousness, the album was stellar.  We Are Scientists obliterated any assumptions, expectations, or musical obstacles in their way to create an evocative and genre-bending record. Did that process in itself set the tone for what was to come next with Huffy and this overarching era of your career?

We really liked that that album merged our standard three-piece rock arrangements with some more aggressive pop production. The fact that we self-produced Huffy let us roll up our sleeves and test that direction out a little more, although I think the record does also have more straight-up rock bangers than we sometimes include on a record. I guess our production interests have been developing in a pretty linear fashion – the better we get at self-production, the more it becomes as rewarding a pursuit as songwriting is, for us.

A lot of fans were discussing how one of your recent singles from this record, “Contact High,” felt like it could fit into the stylings of your record Barbara…which is 11 years old. Do you agree with that comparison and/or have a reasoning behind it?

I think that song has a bit of a nineties rock vibe, which is definitely something we leaned heavily into on Barbara, that kind of upbeat Lemonheads-style jangle that’s underneath it all. I mean, I think all of our songs – starting from “Brain Thrust Mastery” on – kind of just sound more and more like us. “Contact High” is definitely a song that seems like it was written to appeal specifically to me. Thanks, me!

One of the most legendary and notable qualities of We Are Scientists is your effortless ability to take genuine real world events, slick comedy, and the act of having fun and blend it into the music at hand. How does your own enjoyment of entertainment and individual personalities play into what you create artistically, if at all?

We’re not really angling to make our personalities a paramount feature of all of the stuff we do. I think we’re just pretty bad at doing stuff that doesn’t actively amuse us, personally. So, our songs and our sketches and our social media all just kind of end up sounding like “us,” I guess. It’s not an engineered plan. It’s just sort of our default mode of production.

Going off of that, we have to discuss the video for the latest single, “You’ve Lost Your Shit.” There are so many questions and even more layers to peel off and understand, but mostly, what was the premise for this video and it’s narrative? As well, how does the video itself add to or expand on the song itself?

I hate to admit it, but I think the concept mainly came from us wondering what ridiculous new contextualization could be brought to the title itself. Like, “What kind of shit could a person have lost, for a video?”  Turns out, that shit was the guy’s liver, then the concept sort of unspooled from there.

When it comes to Huffy and all it clearly has to offer, what do you hope people take away from this record and the stories, art, cocktails, merch, and fun coming out of it? (Aside from the punky, rocking, concise, and thought-provoking songs).

I just hope that they understand that We Are Scientists is an ever-expanding artistic concern, and it will continue to evolve and spread until it has come to rule over every aspect of human life.

HUFFY, THE SEVENTH STUDIO ALBUM FROM WE ARE SCIENTISTS, IS OUT ON FRIDAY, OCTOBER 8! PRE-ORDER IT HERE!