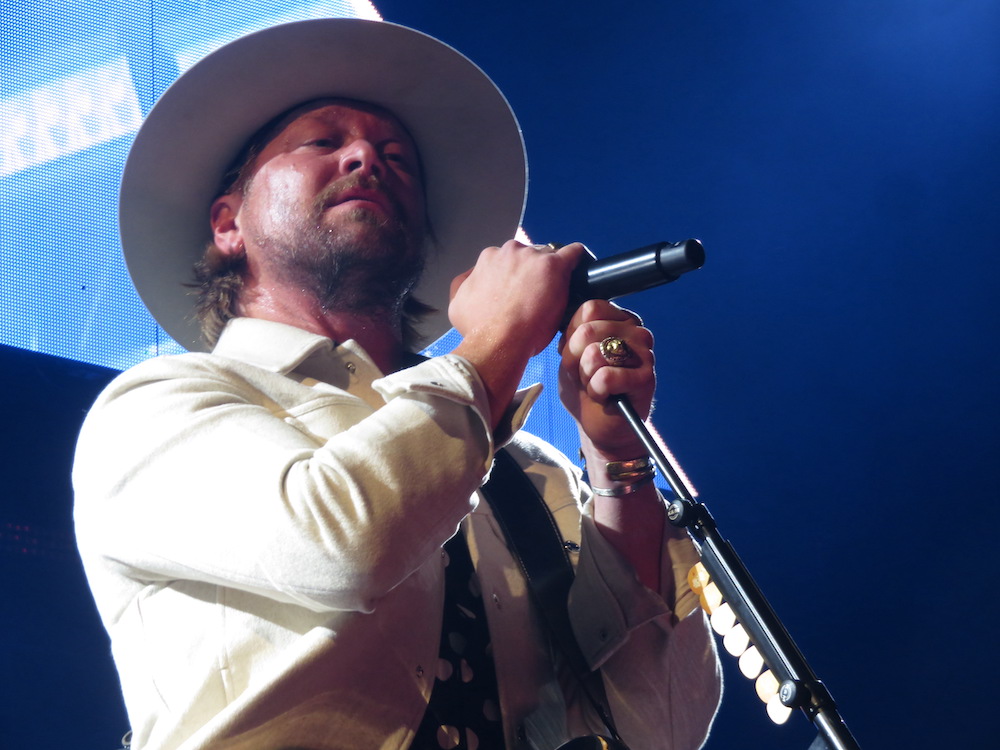 Brothers Bear and Bo Rinehart formed Needtobreathe in 1998 in Seneca, South Carolina, and built a national following over the next decade. The band nearly split in 2014 after longstanding conflict between brothers Bear and Bo Rinehart escalated into a fight that sent one of the brothers to the hospital. After several weeks apart, the brothers reaffirmed that healing their relationship was more important than their music careers, vowing to end the family feud. Needtobreathe resumed touring and recording. Bo left the band in April 2020, however, and Bear salvaged the band by recruiting a new guitarist and working hard with the remaining band members on a new album, Into the Mystery, completing in three weeks what normally would take a year.

After sets by the New Respects and Switchfoot, the new lineup of Needtobreathe (vocalist, guitarist William Stanley “Bear” Rinehart III, bassist Seth Bolt, keyboardist Josh Lovelace, drummer Randall Harris and new guitarist Tyler Burkum) came onstage as a large LED screen showed portraits of each musician. The screen would be used to maximum effect throughout the concert. At one point, as a preview to the band playing two songs from Into the Mystery, the audience watched a trailer for a forthcoming theatrically-released documentary about the making of the new album. Later in the show, the screen showed an infomercial about a local charity that Needtobreathe was supporting with this concert. Aside from these clever yet atypical uses during the concert, the screen also displayed colorful backdrops and close-ups of the musicians.

With the New Respects providing background vocal harmony, Needtobreathe played a solid set of rock songs that were forged with a rural Americana inflection. Rinehart was an outstanding vocalist, his husky voice soaked with passion, grit, and a seeming sincerity in his lyrics. Jon Foreman of Switchfoot, who also has a fine vocal style, joined Needtobreathe for a song that he wrote with Rinehart, “Carry Me,” and a few other songs. The entire two-hour set was charming, engaging and quite polished.

A cover of the Rolling Stones’ “Honky Tonk Women,” led by drummer Randall Harris on vocals, was probably unnecessary but a crowd pleaser nonetheless towards the end of the performance. A richer jam closed the main set, as  Switchfoot and the New Respects joined Needtobreathe for an extended cover version of “When the Levee Breaks.” Another highlight was an acoustic mini-set, with the front line sitting on stools. What the band projects best is a homey approach to rock and roll, and the back porch feel of a stripped-down acoustic set was a welcomed addition.

The cool, clear night was right for an outdoor concert in the fall. Rinehart remarked what a treat it was for his band of southerners to view the Statue of Liberty from the rooftop stage. Not only were the musicians able to enjoy the audience response under the moonlight (no stars visible), but they also enjoyed seeing the brightly-lit skyscrapers of the lower Manhattan skyline on their right and a variety of boats and ships sailing on the Hudson River to their left. The night was a pleasure all around.