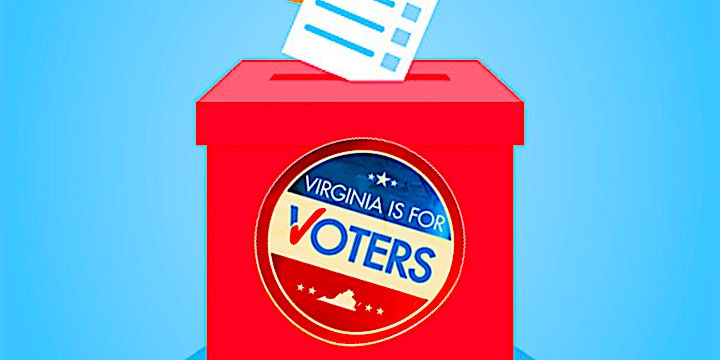 Reality Check: ALL EYES ON THE COMMONWEALTH

The Governor’s Race may redict a 2022 mid-term outcome.

In two weeks, the national temperature of the voting public will be taken again. The last one, the doomed recall of California Governor Gavin Newsom, a Democrat, in September, did not end well for Republicans. But this was before the approval-ratings nosedive for President Joe Biden, who has appeared overwhelmed and mostly impotent in the face of several crisis from Afghanistan to the border to COVID-19 surges to inflation, which has led to a national malaise and as a result the hemorrhaging of the Independent vote. Virginia is not only a “purple” state, but has leaned solidly in the Democrats’ column since 2012 – an unprecedented 13-cycle winning streak in a highly competitive state. While stressing again, as in California last month, most politics is local, a governor’s race in a key battleground state like Virginia is a fair to crucial bellwether on how badly things could go for Democrats in the 2022 mid-terms.

Beyond national prognostications – a fun exercise for political junkies like yours truly – reside the players. The two candidates acutely represent both parties. Former Governor of Virginia and current Democratic candidate to regain that title, Terry McAuliffe is a pre-Obama lifer, mostly centrist and connected to the national political machine. He has the full backing of the national party, which means his president Joe Biden. His opponent, Glenn Allen Youngkin, is a former CEO of the $260 billion global investment Carlyle Group, loudly endorsed by former failed businessman and recent ignominious loser of the 2020 presidential race, Donald J. Trump.

On the ground, Virginia is not immune to the national issues facing a mostly post-Covid United States. Economic strains including jobs, vaccine mandates, the undermining of democratic ideals, and the state of the current presidential administration is on the table for Virginia voters.

The state (a bellwether of national politics), the parties (locked in a death-match of reality and conspiracy), and the candidates (reflections of this ongoing narrative) are all entwined in this one. It is why we have these elections. It is why we vote. And when it is done, we accept the outcome as the will of the people and not some lopsided agenda-fueled tyrannical overthrow of the system based on ego-addled lies, but that is for many future columns to come. Virginia is the order of the week.

For the record, McAuliffe is a loathsome hack. He toiled for both Clintons in wins and losses and ran the party for a spate in the early aughts. He represents wheel-and-deal party politics and is roundly dismissed by most politicos as something of a relic. Youngkin is a Republican, which now unfortunately represents anti-American domestic terrorism. He claims to be against the brutal violence perpetuated during the dark hours of January 6 at our Capitol and is trying to distance himself from recent rallies for his campaign hosted by petulant thug Steve Bannon, who is soon to go to jail for contempt of congress in his role inciting the attempted overthrow of the 2020 election results in a bloody coup. At a recent pro-Youngkin rally, participants pledged allegiance to a flag used on January 6, which unfortunately for the candidate reminds voters of what it means to back anyone on a Republican ticket now.

However, the Democrats have had a bad 60 or so days. The barely Democrat-controlled Congress is in a stalemate on how much more we can jack up the deficit, duly bloated in record numbers by the outgoing Republican-led congress for four years of drunken spending. Both parties fight against the power of the other to spend our money and now it is the progressives v the moderates on what should have been a slam-dunk effort to expand infrastructure spending eight years ago. As mentioned, Biden’s national numbers (52% disapproval in Virginia as a result) are in a sinkhole and McAuliffe can no better hide from this than Youngkin can wipe the stain of Trumpism (11 months of claiming the 2020 election was a fraud with zero evidence) from his candidacy.

Ever more the reason why the Commonwealth of Virginia, once the most powerful force in the nascent days of the republic, birthplace of Thomas Jefferson, the father of modern democracy and the former capital of the Confederacy, is back at the center of our national soul. The very history of America plays out on its bloody ground – and in two weeks it shall again.

As of this writing, McAuliffe barely leads Youngkin by three points, well within the margin of error. Biden easily carried Virginia by 10 points only 11 months ago. Youngkin, a very wealthy CEO, has outspent his opponent, exposing his weakness on crime and economics in a phalanx of attack adds. McAuliffe is clinging to two key popular issues: The state favors vaccine mandates for businesses (54%) and keeping Roe V. Wade legal polls at 60%. Recent abortion-restriction laws in Texas have alerted voters to the reality of this issue most of all. What a shocker. In a close race, the Republican is all about crime and the Democrat is all about reproductive rights.

As far as the numbers guys are concerned, this one is hard to prognosticate. Beyond the national climate or local issues, there is recent history in polling. According to the Five Thirty Eightestimates, a model for higher turnout has McAuliffe leading Youngkin by eight points instead of three points. This is similar to the 2017 race between Republican Ed Gillespie and Democrat Ralph Northam, in which the latter trailed by the same three points going into the election but ended up losing by a solid nine points. The problem with this, the celebrated prediction group notes, is that in 2017 there was an unpopular Republican president. Now that particular shoe is on the other foot.

The final word on this election, as in most close elections, is Independents. Right now, Youngkin leads McAuliffie by nine points there. That is the difference between Biden carrying Virginia last year and the Democratic candidate coughing it up in two weeks. Whether this tells us how 2022 will play out and the prospects for a Republican wave or a more tempered Democratic defeat is dubious, but less so when considering Virginia – seemingly always at the center of the national fervor and our historical tipping point.